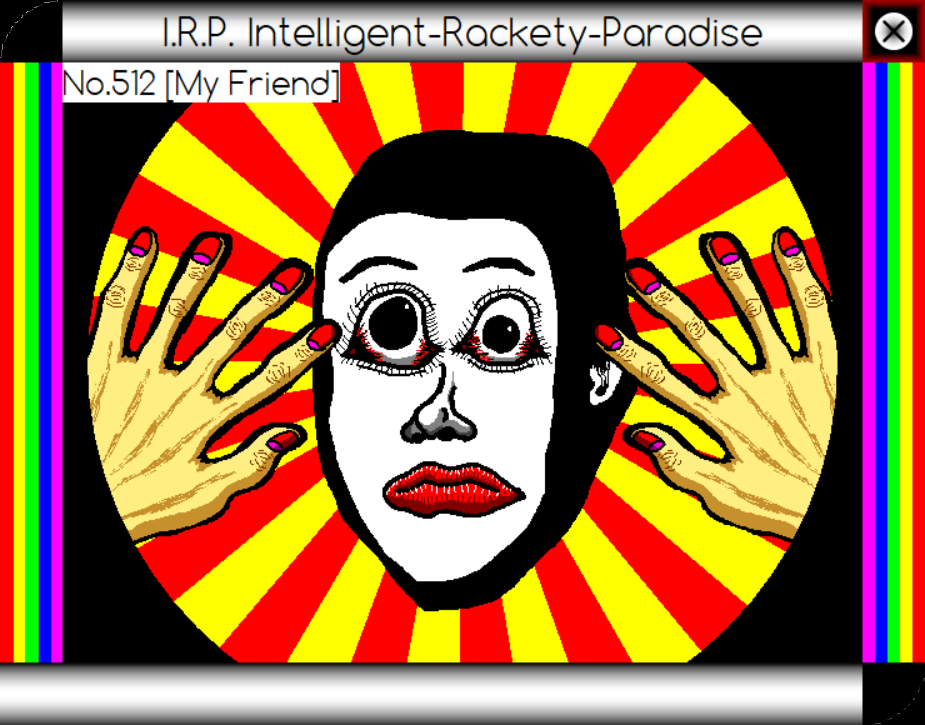 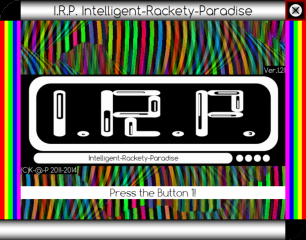 Although little known, Kanoguti has been a prolific artist since he first started working in the mid 2000s. His works have ranged from visual art to music to short stories to video games, although applying the latter term to his work can be potentially misleading. Although he openly describes some of his projects as video games, they exist very clearly outside the commercial standards that term might suggest. Where a commercial video game will typically focus on aesthetically pleasing experiences that are receptive to the player’s presence, Kanoguti’s works express little interest in those kinds of experiences, and the idea of a player hardly applies.

Their interest is in a direct exploration of computer generated visuals and sounds, and they typically employ a mixed media approach (glitch art in particular) to serve that interest. His later works specify, introducing a destabilizing effect that lets them explore the dread the individual feels when relating to other people and the world around themselves. Watching, Why, and M(ae)rry-Go-Round serve as perfect examples. 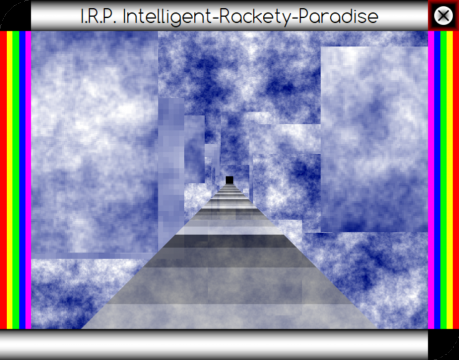 That Intelligent Rackety Paradise so violently contrasts against both Kanoguti’s early and later works serves to make an already strange game that much stranger. First made as part of the 2014 HSP (Hot Soup Processor) Program Contest, one might be tempted to place the game alongside contemporary works like Why and M(ae)rry-Go-Round. However, the comparison doesn’t go as far as it might initially seem. In contrast to the more overt use of perspective and spatial logic in his other works, Intelligent Rackety Paradise focuses more on the navigation of images than of spaces, making perspective a purely conceptual construct at best. Likewise, as considerable an overlap as there may be between this game and his earlier work, the fact of its being a game affords it certain techniques and dispositions that wouldn’t be as available to the latter.

Moreover, these techniques and dispositions end up defining the game as a whole. From beginning to end, Intelligent Rackety Paradise remains an inscrutable experience. It defies basic summary if only because it adopts inconsistency as a framework. The game is divided up into various randomly chosen scenes. They may or may not ask for the player’s input, although in practice, it often makes more sense to fail immediately than to “play as intended” and forever pursue a nonexistent goal.

Although even this isn’t strictly accurate. While some scenes may linger for uncomfortably long periods, just as many come and go too quickly for the mind to comprehend. Some resolve themselves on a dismal note. Others actively deny any resolution, and still others present nothing for the game to resolve. The only apparent consistency between scenes is that each one is a chaotic juxtaposition of images and sounds made to disturb the player as much as possible, although even this is subject to change. In fact, one gets the sense that Intelligent Rackety Paradise delights in the non-meaning it creates. 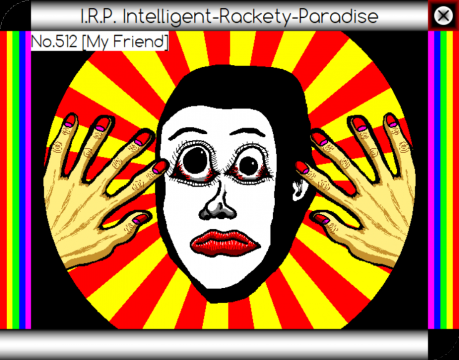 Given how aggressively Dada it is, there’s good reason to believe Intelligent Rackety Paradise is exactly as it appears at the surface. While there is validity to that sentiment, the slight commonalities between each scene suggest a more coherent project than the game initially lets on. Most notable is the fact that each scene asks the player to respond only to pure stimuli. In other words, the game denies players anything beyond the digital divide that they might relate to. One can hardly deny how effective this strategy is in practice. All Intelligent Rackety Paradise need do is leave the player alone with their own thoughts, and they’ll quickly find that any attempt to make meaning out of the game will be made in vain. Not content to stop there, the game carries this strategy further by leaving players alone not only with their own thoughts but with the effects of its various scenes – namely, an unresolved air of mystery and a constant sense of judgment.

However, something happens as the game progresses and players become more familiar with it. These effects strengthen, depart from the player, and metastasize into malice and spite, although phrasing it like this may understate the impact of that change. To say that Intelligent Rackety Paradise is defined by feelings as directional as these is to suggest an identifiable agent beyond the digital divide capable of being malicious and spiteful. So in specifying its own inner workings, the game negates much of the effect it relies on and simplifies its meaning in a way it cannot work with. The player is no longer responding to their own emotions or to some opaque audiovisual assault, but to the more immediately knowable idea of a troll trying to push their buttons. Thus they feel safe in dismissing what the game does.

It’s worth stating this isn’t the only way to approach Intelligent Rackety Paradise. Just as much of the game’s imagery focuses on bodily transformations and the anguish (physical or emotional) associated with them: spaces that pulsate with laughter, bruised and beaten bodies, a woman quietly sobbing as the credits roll, etc. Unfortunately, this new approach may only exacerbate the game’s problems by confirming its acerbic tone. It might even offer new terms through which the game can articulate that tone: pain becoming an end in itself, or the game celebrating the individual’s insignificance.

Alternatively, one might choose to focus not on the stances the game takes toward its players, but on the style through which it presents those stances. More specifically, much of Intelligent Rackety Paradise’s effect derives from its presenting itself as a computer program, and the iconography draws just as heavily from video games and glitch art as it does human biology. (The most notable example is the window itself, although it’s hardly the only one.) The result is very reminiscent of early/mid 2000s Internet culture, when the idea of computers as novelties allowed for impulsive experiments like those depicted here. In light of this, it becomes clear what Intelligent Rackety Paradise finds so interesting about that iconography. The non-serious, almost toylike outlook of this era affords the game a wide degree of expression that it can play with as it pleases. 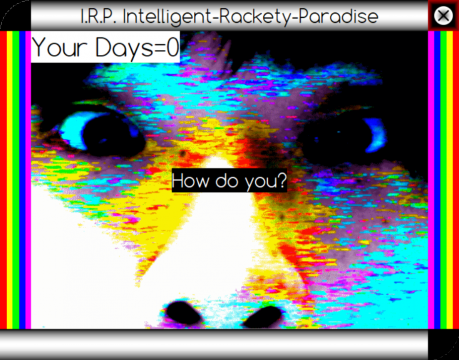 For as informative as this may be, there are deeper effects to consider. Intentionally or not, by basing its aesthetic in early Internet culture, the game places itself in dialogue with the more agreeable style of modern Internet aesthetics. Furthermore, Intelligent Rackety Paradise can only express itself by resisting those aesthetics. But then what does this mean? What about those aesthetics is the game resisting, and what does it communicate through that resistance?

Intelligent Rackety Paradise’s ire lies not with the player who tries to understand it, but with a consumer culture it sees as lulling people into complacency with easily digested meanings; whose pursuit of refinement stifles true individuality and expression. The digital occupies an ambiguous place within this discourse. On the one hand, the game sees it as at least partially complicit in the consumer culture it critiques. Yet it also sees in the digital – more specifically, the ways in which the digital breaks down – the greatest potential to disrupt that culture. By wandering out to the margins, where the computer’s patterns start to break down, Intelligent Rackety Paradise can more easily jostle players out of their complacency.

Admittedly, the game’s singular focus on this disruption holds more importance to it in practice than the change it hopes to affect through that disruption. And it’s never in the nature of Intelligent Rackety Paradise to remain completely settled. For as satisfying as it may feel to have solved its riddle, the act of seeking a solution at all may introduce more problems than it resolves. How does one make sense of a game that aggressively rejects the idea of logic in the first place, and even if they are successful, are they justified for having done so in the first place? These issues aside, the experience of playing Intelligent Rackety Paradise is more than enough to demonstrate how expressive the game is for indulging in that kind of disruption. And while these developments may not restore the sense of mystery the game relies on, they allow it to say something of real substance, and to re-establish itself on more stable footing than a simple desire to confound the player for the sake of confounding them. 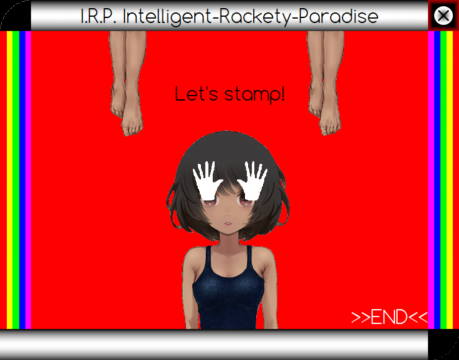 Whatever any of this might mean for the game, Intelligent Rackety Paradise has surprisingly become one of Kanoguti’s most well known works. Timing may be a factor. With its 2014 release coinciding with the birth of the altgames movement among Western developers, the game enjoyed a stronger guarantee of an audience prepared to take it seriously. Yet judging by the minor YouTube presence Intelligent Rackety Paradise has (compared to the rare blog or two dedicated to his other works), the more likely explanation is the game’s Dada imagery lends itself well to reaction videos and Let’s Plays. Kanoguti remains active to this day, in both the art and video game worlds.

A non-commentated playthrough of the game