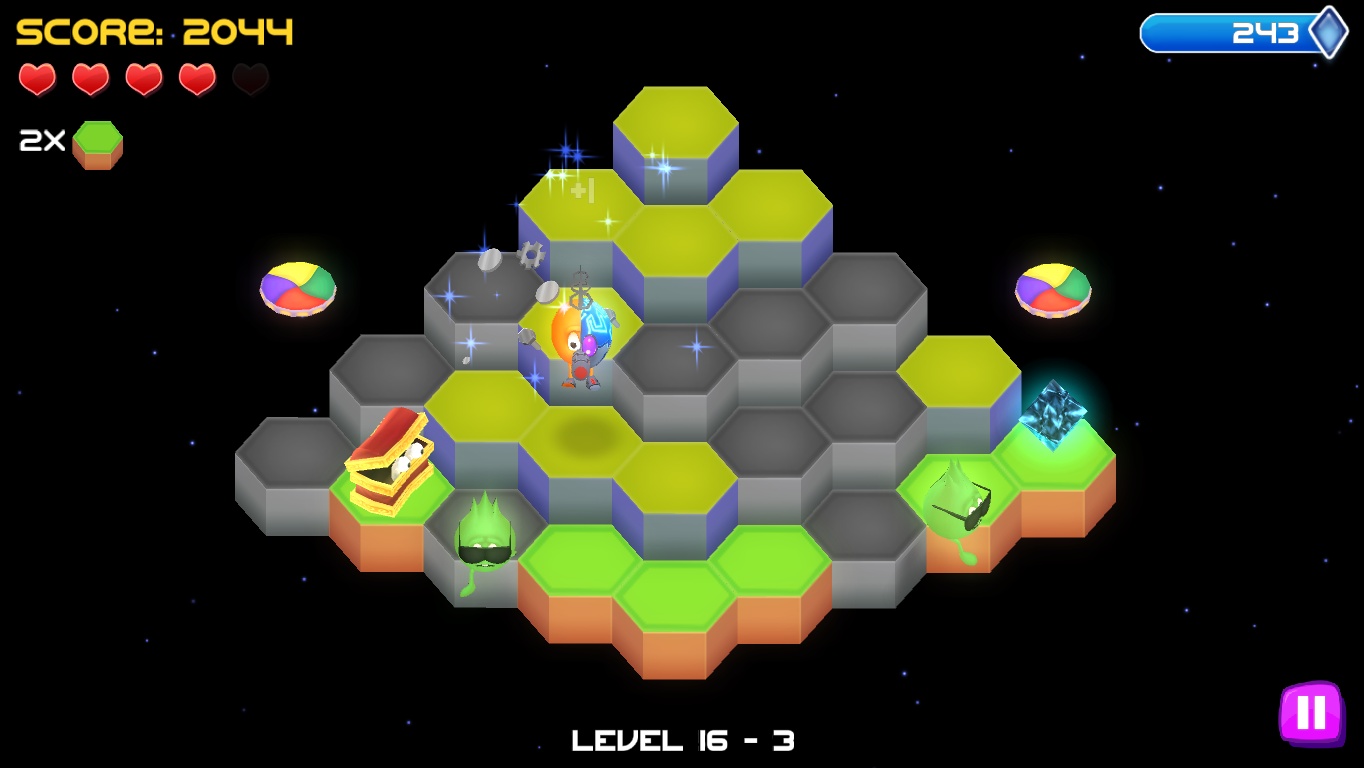 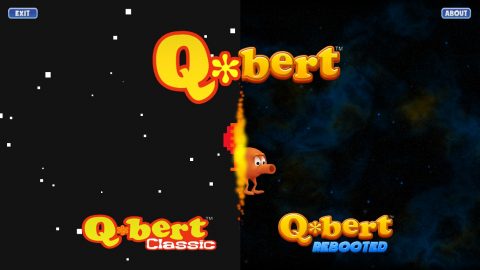 It seems the cynical Flash games had more or less killed off the franchise for almost a decade, but apparently the characters’ appearance in Wreck-it Ralph has brought it back for yet another chance. As with the PlayStation game fifteen years prior, Sony didn’t do anything with Q*bert themselves, but instead licensed it to someone else – in this case mobile and flash game developers Sideline Amusements and Gonzo Games.

It’s immediately apparent that something’s different with Q*bert Rebooted – instead of the good old cubes, Q*bert now hops around hex-shaped pillars. At least someone cared to try and do something a little bit different with the franchise this time. Unfortunately, it doesn’t really work. Intuitively, it may sound as if this change would make the game more complex – it’s two more sides, after all – but in fact it causes the concept to get dumbed down significantly. Since Q*bert can now move in six direction, he can practically get from everywhere to anywhere. The original arcade game would get a serious boost in difficulty as soon as the colors started flipping back to the initial color, but here it’s hardly ever even necessary to step on a finished field ever again. 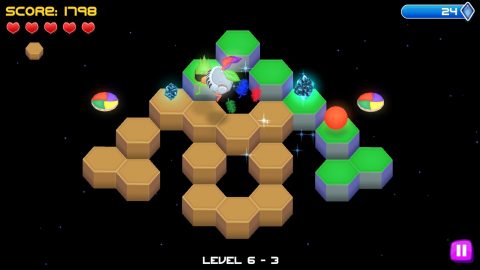 This also means enemies are hardly ever a threat under normal circumstances. Unless they start appearing in massive hordes, it’s laughably easy to get away from Coily, and Slick (his twin Sam has been omitted) is so slow that he doesn’t ever become an issue until very late in the game. Since the sides of the pillars are not the same size anymore, there is no room for Ugg and Wrong-way, who are missing entirely. In their place appears a small orange demon, who behaves the same as the frog in Q*bert 3, so it’s essentially a slower Coily who never jumps down from the pyramid. There are also treasure chests that try to run away from Q*bert and award (useless) points if they’re caught. The most annoying of them all, however, are the animate boxing gloves, who punch the hero off the grid even if they just get on the field next to him. This doesn’t really parse on a visual level, and makes for many aggravating deaths.

The controls are equally problematic. The game supports mouse, keyboard and gamepad options, but neither of them ever feels quite comfortable, due to the difference in range between vertical and horizontal directions. Keyboard controls aren’t too responsive, and require pressing the directional keys for each step; just holding a direction to keep moving across the board is not possible. With the mouse controls that is no problem, but it’s very easy to get into a routine of hovering around the screen while keeping the left button pressed – a method that is prone to err by a few pixels in the vertical range, causing Q*bert to joyfully jump to his death more often than would be acceptable, if lives even mattered for most of the game. 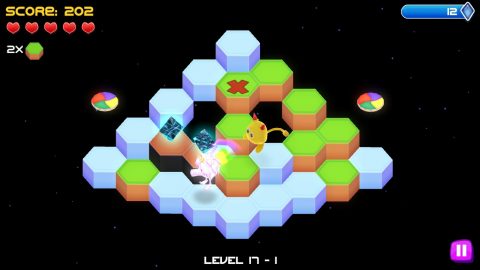 Things are made worse by terrible padding that makes up the majority of the game: The game is much more conservative with its stages than all the games from the Game Boy to the Flash releases, featuring only five variations of the pyramid shape, but they’re repeated for a whole 36 levels. Each level is further broken down into 3 rounds (and one bonus round), and the game introduces about as many new elements per stage as the arcade game did per round, so progress is stretched out over three times as many stages. The ordinary stages are also way too easy. There are four or five challenging rounds towards very end, although difficulty is mostly achieved by throwing overwhelming amounts of Slicks on the pyramid, sometimes combined with the annoying gloves in tight quarters. Also by the time they show up, you’ve already played Q*bert at least 150 times to even get a hint of a challenge.

But that’s not all – every stage has three different goals, each of which is worth a star. The first star is awarded for clearing the stage, the second for keeping within a time limit, and the third for beating a set score. Annoyingly, you can never get more than one star at a time, so to collect them all, every level has to be played three times. The time limit challenges can get tricky in stages where the colors keep flipping back, with a lot of enemies around at the same time, but that’s not most of them. The score challenges are even more uneven in balancing, because it’s easy to just keep flipping back and forth tiles or catching Slicks where those are available. In all other stages, the task just equals getting a flawless run losing no lives, wasting no disks and catching all possible Coilies and treasure chests, so there’s no good reason to even have a score.

The bonus rounds may well be the most interesting part of the game, at least at the beginning. Here Q*bert has to collect crystals that are scattered around the board within a very strict time limit. There’s never enough time to get all of them, so they require quick thinking to find the most optimal path over the pyramid – or it would require quick thinking, if success in these stages mattered at all. The crystals are the game’s currency to unlock stuff, but there’s not much stuff to unlock. All there is are six alternatives skins for Q*bert: Q*zard, Q*bertha, Q*bot, Q*zilla, Q*tee, Q*knight and Q*nicorn. Some are just silly costumes, others vaguely based on former Q*bert universe characters, like Q*bertha and Q*tee. But they look nothing like their unique original appearances, and they’re all little more than skins grafted onto the standard Q*bert model. The choice of costume makes no gameplay difference at all, either. When going for the first star in each level, every crystal picked up is just worth +1, but with the second and third star, +3 and +6 crystals get thrown into the mix. It’s easy to unlock all costumes by about 1/3 of the game, and afterwards the counter just keeps running towards infinity for no good reason. 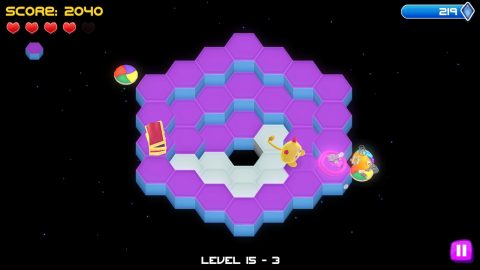 There is no doubt Q*bert Rebooted is a failed attempt at revitalizing the franchise, but at least it is an attempt, which is more than could be said about the Flash games that came before. And it looks reasonably pretty, for a game that’s so massively held back visually by virtue of its pedigree – especially nice is the fake screen glow effect that was so characteristic of early arcade games back when most of the image was just pitch black with only the game’s core elements sticking out in vibrant colors. That alone is not quite enough to justify the – admittedly humble – investment for the game, though.

Like nearly every new Q*bert game ever since 1999, Q*bert Rebooted also includes the original arcade game. It’s just another accurate emulation with the good old gameplay intact, but it just looks horrible – the low resolution graphics are resized in the ugliest way possible, with no filter and no care for accurate pixel ratios. It is also missing several sound effects from the arcade. However, since Sony has a tradition of pulling Q*bert releases from download services after a couple of years, it is currently the only way to legally purchase Q*bert – and who knows for how long?