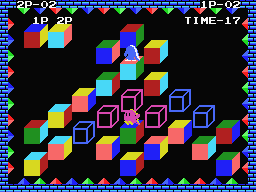 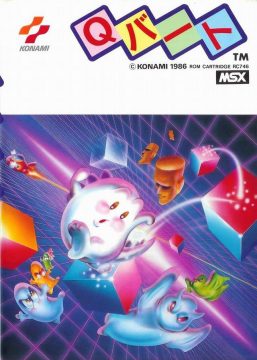 Konami had distributed the original arcade game in Japan, and apparently snatched the rights to also make a home computer adaption from the license. Although the resulting MSX game is titled just Q*bert, it is actually based on the sequel – based very loosely, too.

What stands out immediately is the fact that Q*bert isn’t actually in the game. Instead the software stars Wrappy, a little dragon that bears an uncanny resemblance to the heroes of Taito’s Bubble Bobble. The enemies, while they follow the same patterns as those in Q*bert’s Qubes, have also been mostly replaced to feature ghosts and Konami’s infamous Moai heads.

The real news are the stages, though. For the first time in the series, the layout of the cubes changes after every round, for a total of 50 different stages. The complexity increases by the same mechanics as the original (although this version never goes so far as to make the player turn back once conquered cubes), but most of the challenge now comes from the layouts, with bottleneck passages and even gaps in the structure, which can only be crossed by a long jump.

To achieve this, Wrappy first has to touch a red blob, who grants him the ability to leap over the range of two tiles by holding the space bar until the end of the round. The game introduces a whole range of these colored power-up blobs: The green ones still stop enemy movement for a brief period of time, whereas brown blobs make Wrappy faster, grey ones kick out all enemies currently on screen, and blue ones make the hero temporarily invincible. 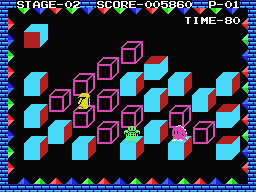 Konami also added a two-player simultaneous mode, which is so brilliant it’s baffling how Mylstar and Parker Brothers only ever did alternating modes. Each player is assigned a different target cube alignment, and both have to compete to either be the first to complete a line of five, or have the most completed cubes after the time runs out. The fun part comes when players keep messing up the other’s “finished” cubes instead of concentrating on their own. When one player is already standing on a cube and the other jumps at it, the former inhabitant gets pushed away a step. The alternative method to win is pushing the opponent off the grid three times. While in the first mode the players have the cubes to themselves, there is also a second mode where enemies spawn. Should a round unexpectedly end with a draw, the two cute dragons settle the score with a round of rock-paper-scissors (where the outcome is determined randomly).