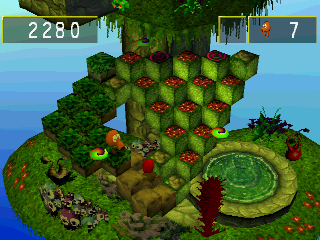 After the brief revival in 1992, Q*bert went dormant again for most of the decade, until Hasbro Entertainment stepped in to bring back the hopping orange creature. Whereas previous licensees went by the mysterious JVW Electronics, Hasbro, who at the time held the Atari brand and tried to position itself as a curator of classic game franchises, got the license directly through Sony Signatures. (Sony had bought Columbia Pictures from Coca Cola in 1989 and was thus the de facto owner of its properties.) The development was outsourced to Artech Studios, a Canadian developer that’s been around since the early ’80s and specialized in contract work for various franchises. Unlikely as this origin makes it seem, this marked the first time a post-Mylstar Q*bert sequel actually had much of a creative vision behind it and tried to take the core concept to a new level. 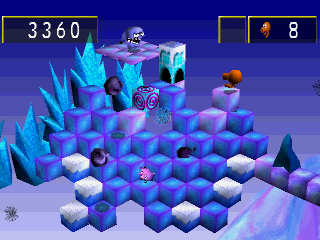 First released in 1999 for PlayStation and Windows – the Dreamcast version ported by Pipedream Interactive followed a year later, and it came to the Macintosh in 2001, courtesy of MacSoft – the new game was titled just Q*bert, which is a bit misleading. Sure, the original game is also playable, both with the old 2D graphics and a new 3D engine, but the core of the product is an Adventure mode, which is an entirely new game. Here, Q*bert has to travel through four different dimensions to save his friends, which seem to be members of the same species, although some of them curiously have no nose. Every dimension consists of six selectable stages, each of which is further divided into a number of interconnected playing boards.

Things start simple in world 1, where every stage has a hub with teleporters leading to the different rounds. Afterwards, the boards branch off each other, and Q*bert can travel back and forth between them. There are even blocked-off paths of numbered cubes that can only be passed after reaching a certain stage. All this makes the worlds look more complex than they are, but at least it’s not entirely linear.

In each round, Q*bert’s task is still to change all tiles to a certain color, but this time there are many new elements to change up the game. For starters, Q*bert’s friends require to be dealt with in different ways. Z!la is a magician who wizzes new teleporters into existence. Then come The Triples who sometimes run away, sometimes keep hopping around the fields messing up the color pattern, but Q*bert can grab them for a score bonus, much like Sam and Slick. The third dimension, essentially a huge factory, is occupied by the construction worker A!bol, who can build new cubes or make existing ones disappear when Q*bert touches the corresponding icons. Q*dina finally is the stereotypical damsel in distress, and Q*bert has to find a key to free her from a cage in each stage, only to see her sucked away to the next round by a maelstrom.

The stage layouts, for the most part, appear superficially more conservative than other games in the series, but there are mean tricks to throw players off, like uneven height levels that make it harder to predict where balls or similar enemies will bounce to next. Changing perspectives sometimes result in an equal amount of confusion, even though the game only once at the very end does something as crazy as having the field upside down or tilted to the side. Later stages introduce a number of different environmental hazards and switches that may turn the lights of (which slows enemies down), add or remove cubes, or even turn around the board so Q*bert gets to recolor both sides.

Another new element are items that Q*bert can hold onto and are activated with a button, so this is the first Q*bertgame that isn’t entirely content with using a joystick. The icons to set A!bol in motion belong to this category, but there are also shields that protect Q*bert from hits, bombs that remove all enemies, ice to cool off falling magma rocks, and so on.

Unfortunately, the 1999 Q*bert still tends to feel like it’s dragging on for a bit too long, and the basic goal in each remains relatively simple even compared to the older games. Three-colored cubes and back-switching are rare, and never once appear in combination. There are three difficulty levels to choose from, but they only change the number of lives available in each stage. The only really hard stage is the final “boss fight” against a giant King Coily, but mostly so because of its insane enemy respawn rate. Not all of the gimmicks really work, either. In particular, there is a terrible maze which places Q*bert on long, branching wooden paths, which feels like little more than filler, even when it introduces enemies that can be easily avoided by hopping past them underneath when they jump. But at least it’s obvious that someone really tried to break through the monotonous routine most of the other efforts in the franchise have fallen into. 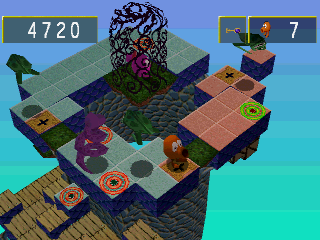 The secret star of the game, however, is the Head to Head mode. Like Konami’s MSX game, it pits two players against each other. The competition this time is a bit more indirect, though. Large chunks of the board are designated to each of the players from the beginning, only a few cubes are free to be conquered by either one. The players try to get their part of the board done first, and then escape with the appearing flying disc. After a certain amount of rounds on different boards, the game is decided by score. However, as the competition moves on, further special cubes are introduced that allow hampering with the other player. Some blocks are decorated with an enemy’s countenance, which can be hopped on to send that enemy to the other player’s part of the board. A photo camera turns around the playing field, so the opponent can hardly see where they are jumping, anymore. Eventually it all turns into a chaotic, but diabolically fun contest.