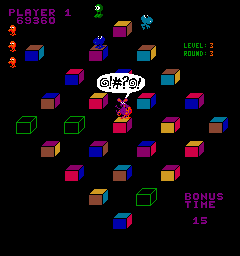 Mylstar sure took its pretty time with producing a video game follow-up to Q*bert. After shooting off Davis’ update – presumably to exploit the successful base game for as long as possible – the company got Neil Burnstein on the job to produce an all new sequel. But while the title screen reads “1983”, no magazine ever mentioned it then, which would be very odd considering the popularity the franchise enjoyed at that time. So it seems very likely Q*bert’s Qubeswasn’t released before well into 1984, when the industry had pretty much crashed and no one cared about video games for a while. In fact, the game wasn’t even mentioned in Electronic Games’ “obituary” for Mylstar after the company’s closure in September 1984, so it must have been an extremely small under-the-radar release, if there was any formal release at all. Apparently it was also only ever available as a conversion kit for existing Q*bert cabinets.

Q*bert’s Qubes is not at all the typical cash-in sequel, and is at least as creative as the original. In a way it resembles the Rubik’s Cube puzzle, as it’s all about turning around cubes to match their colors. These cubes are aligned in 5×5 diagonal lines for a diamond shape, and whenever Q*bert jumps off one of them, it turns towards the direction of the jump. When a cube’s positioning is matched with the target that’s displayed in the upper left corner, it gets locked in and turned into a wireframe. But Q*bert can only clear a line by matching complete lines of five (“tic-tac-toes”). 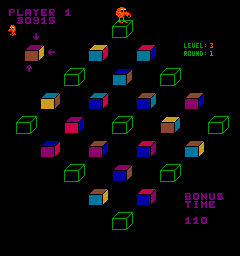 In the beginning, one line is enough, and the cubes only have two different colors. As the game progresses, they first get an asymmetric pattern, then a third color, and finally a different color on all six faces. The game then proceeds to increase the number of required “tic-tac-toes”, and from stage 6 onwards cubes keep turning around even when they are matched once. At its highest complexity, Q*bert’s Qubes is almost as hard to solve as the real Rubik’s Cube.

But of course that is not all. Once again several mean critters get in the way. Rat-a-tat-tat is essentially the same as Coily from the first game, only he’s – who’d have guessed – a rat. Since there are no flying discs in this game, Q*bert can defeat it by jumping off a cube just the moment Rat-a-tat-tat leaps towards him, whereupon it plummets into the bottomless pit. Sam and Slick return, although they are now identified as “Shoobops”, and have the annoying habit to turn around cubes as they move downwards, even if they had already been locked in with the target pattern. The red balls of the original are essentially replaced by the Meltniks, although those sink into a cube if they jump on a surface whose color matches their own. The green ball returns without any notable modifications, accompanied by a second green “power-up”: When Q*bert touches Sheldon the turtle, monsters are slowed down for a short while.

The original Q*bert only introduced a bonus round in its never published update, but the sequel comes with one right out of the box. After every fourth round, before ascending to the next level, there comes an enemy-free diamond, and Q*bert can freely turn around each cube without jumping, until it’s matched to the target and the noser gets automatically transported to the next. Since there are no threats in this round, of course there’s a time limit, which actually starts counting down in the normal stages (to a minimum of 15 seconds), and whatever time is left after completion can be used in the bonus round. 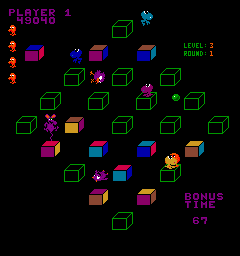 Q*bert’s Qubes doesn’t take long to get more challenging and involving than the original, but for experienced players it offers the option to start at any of the first four levels. Beginning the game with the need for three tic-tac-toes with countless enemies swarming the playing field should be enough of a challenge for most. Arcade operators also could set the game to hard difficulty. While all the regular enemies start at the top, here purple bats and birds come jumping in from the lower borders and cling to the sides of the cubes, much like Wrongway and Ugg before them. They are kind of unique in the Q*bert universe because they’re the only creatures who are never named.

Probably due to the industry crashing, Q*bert’s Qubes never got the attention it deserved, even though it has more enduring gameplay than the original Q*bert. Only two home ports where released, for the old Atari 2600 and the ColecoVision. The good old VCS only manages rows of 4×4 cubes, but starts with all six colors on the cubes to compensate in difficulty. Unfortunately, because two of the visible cube surfaces are interlaced with black lines and the top is nothing but a thin line, it’s rather hard to parse the screen. The higher difficulty level simply makes the game start at level 6 (where all cubes keep rotating), and the birds and bats are nowhere to be seen. For some reason this version also doesn’t display all status information on screen, so the current level number and bonus time are missing. 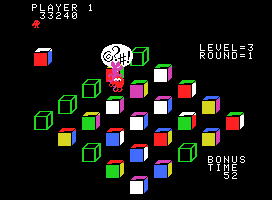 The ColecoVision version naturally is much closer to the arcade, but it also lacks the hard difficulty from the arcade, only allowing to choose any of the first four rounds to start from. Sheldon the turtle also never appears in this version. The bonus round works a bit differently here. Q*bert is still locked in place until he matches the colors of the current cube, but afterwards the player has to steer him to the next available block manually. The manual also contains instructions for Commodore 64 and Atari computers, but those ports were never released. 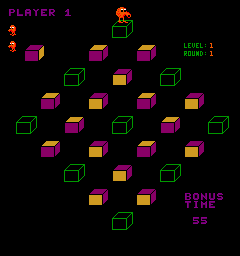 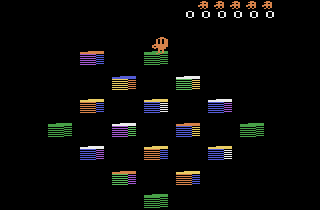 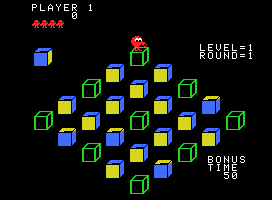