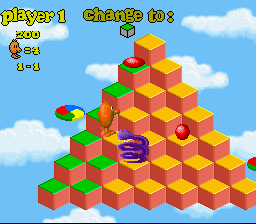 Q*bert 3 was made by the same developer as Q*bert for Game Boy, and it shows. The game can be considered a direct successor to the handheld version (which could mean that it doesn’t acknowledge the existence of Q*bert’s Qubes, given the numbering). It has all the added elements, the overview maps, and some familiar themes for the levels. But of course it also adds a lot more stuff. 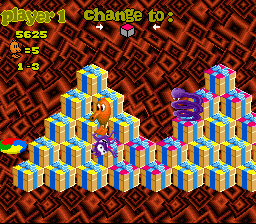 The most prominent new enemy is a Frog that keeps slowly chasing Q*bert around, but due to its sluggishness it never recklessly jumps after Q*bert on the flying discs, so he never goes away – until Q*bert collides with it and loses a life. Some stages contain mounted cannons that shoot tiny red balls in varying directions, which are so small it’s easy to miss them and get killed. And later in the game the noser has to face hats(!) who keep hopping around in circles between two or four floor tiles.

Most of all, Q*bert 3 naturally looks and sounds much better than the Game Boy offering. Q*bert-inventor Jeff Lee is credited for the graphics again, too. Everything is super bright and colorful, with psychedelic moving backgrounds. Q*bert now hops on pieces of American flags, keyboard keys that change their letters, ice cubes and rotting teeth, among other things. Sometimes all the colors make it hard to see what’s going on, though, and some floors that only change brightness instead of color could stand a bit more pronounced differences. 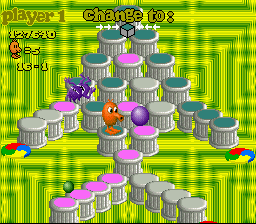 Unfortunately, Q*bert 3 is also the best proof of the fact that the classic Q*bert concept may not be all that durable. The game boasts 80 regular rounds, followed by twenty more in “X-Bert” mode. That may sound impressive, but it doesn’t offer any new kind of challenge. It’s just more of the same. Stages are a bit more daring this time, and some of them even consist of small islands Q*bert has to travel in between using the flying discs, but the concept is less interesting and more annoying than it sounds. After the first few dozen rounds, play is dominated by that mildly boring déjà vu feel, because there can only be so many variations on the core mechanic. It’s also not possible to resume progress later, not even with passwords. There are cheat codes to start at the midway point and to access X-Bert mode directly, but that’s it.