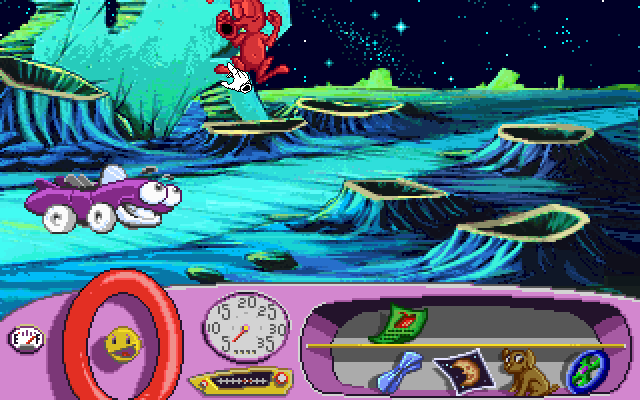 A year after his inaugural adventure game, Putt-Putt returned for the more ambitious “Putt-Putt Goes to The Moon”. The game reprises the same interface and engine as the previous game, and marks Humongous Entertainment’s third Junior Adventure game, after the first Putt-Putt title and one-off Fatty Bear’s Birthday Surprise. While Putt-Putt and Fatty Bear’s adventure games were both largely domestic, Putt-Putt’s second adventure runs further into science fiction territory. Putt-Putt’s story begins with an invitation to see the brilliant scientist Mr. Firebird at the fireworks factory.

The player can click on buttons in-game to see fireworks as long as they’d like, but the game won’t progress until clicking on a window, letting a butterfly into the factory. Putt-Putt’s puppy Pep then leaps out of his owner’s passenger seat and knocks down a forbidden lever. Putt-Putt says, “Oh no, Pep!”. The music gets dark suddenly. While the resultant hijinks are light-hearted, with Putt-Putt getting picked up by a firework and being whisked away to goofy music, this brief moment of darkness shows that Putt-Putt’s second adventure has higher stakes than the prequel. The little car runs adrift through the stars, passing a sign that points to the moon. 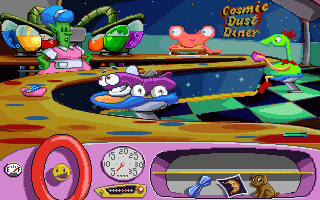 In this game, Putt-Putt must return home from the moon, where he has drifted off. Thankfully, Putt-Putt doesn’t seem to need to breathe or run in danger of freezing to death. The moon is, in fact, what appears to be an alien hub world. Putt-Putt’s mission here is to rebuild a partially deconstructed American space shuttle, and in the progress he runs into many odd humanoid creatures and beasts.

Before that, however, the game introduces Putt-Putt to his new companion Rover, a moon vehicle abandoned by strangely human astronauts. Rover and Putt-Putt make a pact to get off the moon together after Rover saves Putt-Putt from a collapsed bridge. While Putt-Putt is never really under mortal danger, this situation feels more dangerous and tense than anything in its prequel, and perhaps the series.

It’s definitely more ambitious than the previous game. Instead of collecting three macguffins as in the previous game, Putt-Putt must now acquire rocket fuel, a nose cone, a key, a steering wheel, and “moon rocks”, a currency he can use to buy the shuttle itself. 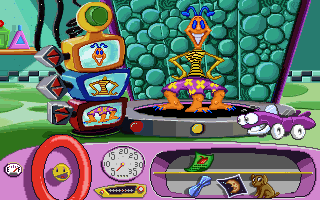 Some of these challenges are still pretty simple. To get the rocket fuel, Putt-Putt just has to follow directions left at a gas station to navigate an apartment building, then follow the navigation given by two subsequent apartment-dwellers to find the station’s proprietor, an alien named Robbie Radar.

It should also be noted that this is the only Putt-Putt game that is spent largely with humanoid characters, instead of autonomous vehicles and animals, as NPCs. The whole game has a sort of 50s throwback style, with an old-school diner, black-and-white tiles and aliens with hair that looks heavily sprayed. The midi soundtrack is heavy in ragtime and lounge piano and organ. The game even plays a short jazz theme on its title.

It can run into the macabre faster than its predecessor One room lets Putt-Putt create a custom humanoid alien by mashing up different upper bodies, lower bodies, and torsos. In some ways, its anticipatory of Humongous Entertainment’s Pajama Sam games, which would feature a more surrealist style. It feels more out of place with Putt-Putt, however. Perhaps the strangest moment is when Putt-Putt meets The Man in the Moon, who is literally a humanoid crescent moon. The man in the moon has wanted to see a picture of himself for 10,000 years. Luckily, Putt-Putt has a photo of the moon given to him by Rover. Consequently, the Man in the Moon gives Putt-Putt the rocket nose-cone. 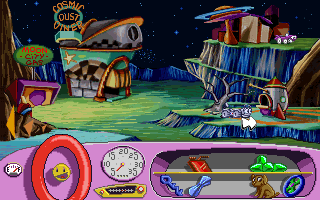 In extraneous material to the main game, this game also features a lot more content than its predecessor. In the beginning of Putt-Putt’s mission on the moon, Pep and Putt-Putt play hide-and-seek in a maze that Putt-Putt must navigate from an overhead view. An arcade game called “Bear Stormin’” has the player control a cartoon bear in a bi-plane, collecting balloons for fuel and avoid barns and the like in a side-scrolling setting over a series of levels. Other areas include the aforementioned create-an-alien building, an observatory where Putt-Putt can view constellations, and a diner where Putt-Putt can drink soda that temporarily changes his color. A basketball court in-game lets Putt-Putt bounce about on springs while aliens shoot hoops. An observatory lets Putt-Putt view constellations.

Still, even with a more ambitious setting and more padding, Putt-Putt Goes to the Moon is over fast. Once Putt-Putt has collected the needed items, which seldom require much traveling or puzzle solving, he and Rover start up the rocket and take it recklessly back to Earth. It’s a little strange to watch the rocket ricochet off the ground and Putt-Putt and Rover to exit unharmed. Just as the first Putt-Putt game ended with a smiling sun setting, this one ends with the day passing into night, and a big smiling moon winking at the player. The moon is a nice place to visit, but it feels good to be back where a car is a car and a rover is a rover. 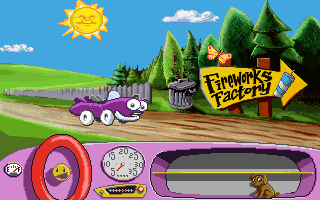 Putt-Putt Goes to the Moon feels like an outlier in the series, with its setting mostly removed from that of the previous game and the ones forthcoming. Most of its experimentation would be dropped by the time the third game came out, although Mr. Firebird would appear again in Putt-Putt Travels Through Time, and Rover would later appear in Putt-Putt Enters The Race. More so than its predecessor, its attempts at kid-friendly whimsy can slip into the uncanny. Still, it also points to the future of the series and Humongous Entertainment as a whole. It expands its series, but also shows that series’ limits in the process.

The game has remained playable since its release, and was released on Steam, Android and iOS in 2014, alongside most of the Putt-Putt SCUMM games. Like its predecessor, it was also released on 3DO in 1994.