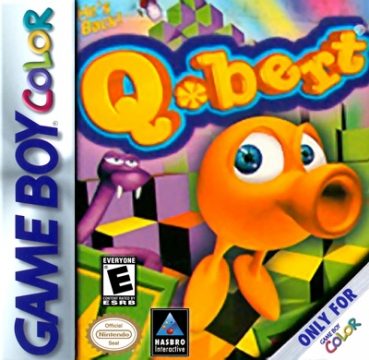 Although Q*bert for the Game Boy Color was marketed as the handheld equivalent to the PlayStation game, it’s once again a very different beast. The mechanics are much closer to the arcade game – no surprise, since the code is based off an exact homebrew port of the original. It is the only game that allows to play as an alternate character, Q*dina from the 1999 title, but gameplay is the same between her and Q*bert.

Like its big brother, this rendition of Q*bert features an Adventure and an Arcade mode. Adventure is once again divided into five dimensions for Q*bert’s friends and Coily, but they lack the gimmicks and new elements they used to be associated with. The Triplets and A!bol still appear in the stags, but all they do is grant extra lives. Alongside the familiar balls, sometimes a little sun drops down the buildings that erases all enemies, and a shield that makes the hero invincible for one collision with an enemy.

About halfway through the adventure, stages start to consist of several parts that can be travelled in between with teleporters. Otherwise the 20 stages lack any defining elements to tell them apart, although in some of them with particularly narrow parts Q*bert is simply set up to fail. Enemies drop at an insane rate, and there’s no indication when and where they appear, either, so trying to clear the narrow paths at the top of many stages goes along with many cheap deaths. There is also one instance where the teleporters never lead back to the first part of the stage, so if the player hasn’t cleared that in the first place, there is no other way to solve it than lose all lives and use a continue (which sets the score back to zero). The last few stages are insanely long, and in some of them Sam and Slick mess up the board almost faster than it is humanly possible to clean up after them. This is definitely one of the harder games to bear the Q*bert name, but not for entirely good reasons.

Arcade mode isn’t simply a reproduction of the 1982 original, either. It does omit all the added elements from Adventure mode, but it entirely consists of original stages, the classical pyramid is not even in as an introductory level. Although it is paced quite a bit slower than Adventure mode, it suffers from the same problem with unforeseeable deaths. The stage design is more interesting than in the old Game Boy game, so this is the better choice on a portable device, but still inferior to the SNES and PlayStation games.