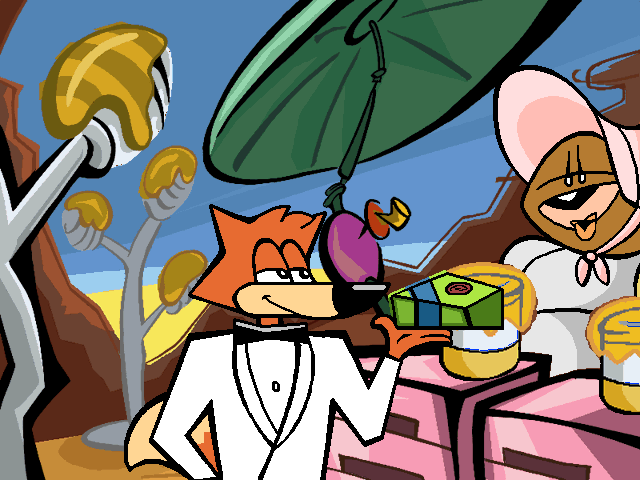 Spy Fox’s point-and-click adventures conclude with Operation Ozone. While the game marks a departure from its previous games in some key ways, it also reaffirms the series’ general structure to somewhat diminishing returns.

The villain-of-the-week in this case is Poodles Galore, a cosmetics titan with perhaps the most evil scheme yet for the series. Using a giant spacefaring aerosol can, Poodles is deliberately depleting and destroying the ozone layer, an ordeal she expects to force the world to become dependent on her SPF 2001 sunscreen and ultimately render her the ruler of the world. Within a matter of hours, the game says, she will succeed. Thankfully, SPY Fox works well under pressure. Mike Madeoy returns as the eponymous fox, with Andrew Wale reprising the role in the British dub. 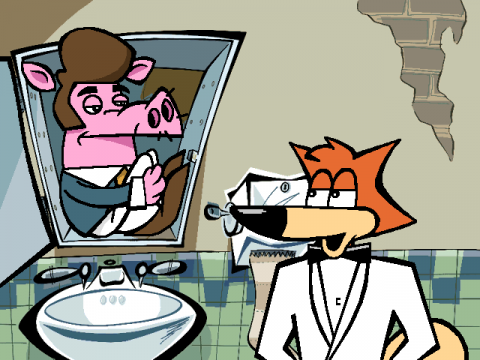 The spectre of this ecological destruction hangs over SPY Fox 3: Operation Ozone. The game’s main hub area, known simply as the street, sits eternally in dusk. Periodically, the giant can can be see orbiting above it followed by a high-pitched noise.

Spy Fox 3 follows the same general structure as Some Assembly Required. It begins with its protagonist meeting with an informant, becoming stuck in enemy territory, and then building a vehicle to escape via a simple puzzle. In the last game, this was Dehydrated Skis, and in this game it’s an origami rocket skateboard. Afterwards, another short action setpiece gives way to the true plot.

Spy Fox meets with The Chief and is assigned his mission to investigate Poodles. He meets up with Monkey Penny and Professor Quack at the Mobile Command Center, uses a fake identity to meet the villain face-to-face and receives a list of items needed to destroy a superweapon. Like in previous games, a system of separate “paths” randomly alternates the needed macguffins and their locations, although some items are always in the same place. 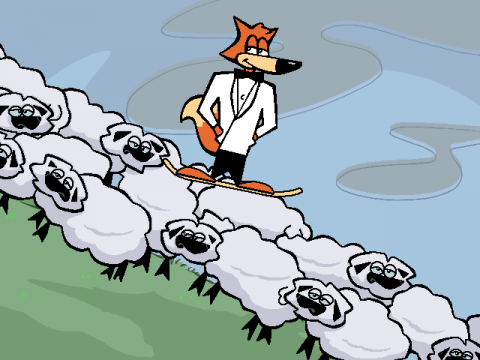 After collecting all of these items and infiltrating the superweapon, a secret final section opens up if the player can click on an exit point on-screen. Then there is a final puzzle sequence where Spy Fox apprehends the villain.

By being the third game using this formula, Spy Fox 3 understandably has lost some of the novelty of its predecessors. Still, there’s some creativity here in the plot. The game has fun with its cosmetics titan villain, who uses cosmetic buzzwords as passwords to safes and locks rooms in her factory with hair and fingernail scanners. Some puzzles are fun too, like one where SPY Fox must essentially sell girl scout cookies to NPCs throughout the game world.

Spy Fox’s informant on the Aerosol Can is “cosmetic rocketry” expert Plato Pushpin, a German platypus who realized the evil of Poodles’ ways and crossed her. Captured by his former boss, Poodles intends on [basically] killing him by tying him up at the end of a bowling lane and throwing a deadly bowling ball at him. Spy Fox must save pushpin by infiltrating Poodles’ bowling team and then using his own SPY bowling ball to capture the informant. Having captured Pushpin within his bowling ball, Spy Fox flees the scene and takes Pushpin to the mobile command center.

Pushpin can create a “Congeal Pill” to neutralize the aerosol in the flying hairspray can, but he needs multiple ingredients first: a piece of chicle gum, the satellite’s APD number, either a prickly pear pizza or a “secret doughnut XY”, and either a freshwater pearl or a chunk of beauty clay. The items are located within different regions of the game: the South American jungle, the African desert, the Eurasian lake and North American town that contains Poodles’ factory.

In order to cover all this distance, Spy Fox has access to his car, which returns from Dry Cereal. The car can automatically and instantly travel to the different locations, meaning that despite the game’s scope, it’s map is really comparable in size to that of its prequels. While the items are all in one region, Spy Fox must travel between the locations and solve gadget, item and general logic puzzles in order to obtain them. 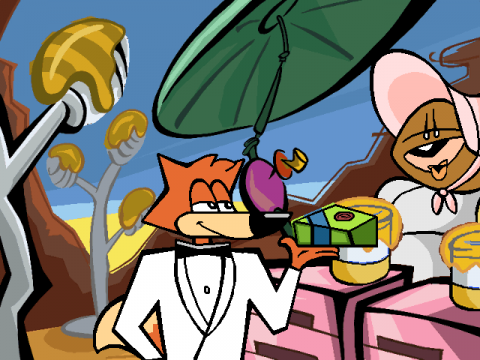 While the first two games’ locations benefited from a level of specificity, sometimes Operation Ozone seems to spread itself too thin. While the area’s are supposedly situated around the world, this game seems more American than either of its predecessors. The lake area seems more Pacific Northwest than Eastern European, and the African desert more American southwest than Sahara. This Americanness extend to the music, which leans more into rock and even rootsy blues that recalls Humongous’ Putt-Putt Enters the Race more than the comparatively subdued soundtracks of the first two games.

This change also affects the series’ traditional use of musical motifs, like the swelling horns that play when Spy Fox solves certain puzzles. These motifs have a smaller role in a game with a sonic palette that pivots more into other musical styles. The new musical direction isn’t all duds by any means. The more action-oriented soundtrack that follows Spy Fox as he enters the ruins of Chicle Picchu works well to set up the tension of the space, and the jazzy muzak of Poodles’ factory captures the tension between industry and luxury that it embodies. Still, everything feels just a bit less distinctly like Spy Fox. While the opening cinematic clearly pays homage to classic spy film, the globe-trotting game world feels unfocused, as do the new characters. It still works as a cartoon adventure game, but it lacks a lot of the specificity that made Some Assembly Required and especially Dry Cereal special.

There is one mechanical change to the game of note. Spy Fox’s inventory pocket is now one large pocket that can be opened to show his items, instead of a series of pockets. This mostly makes inventory more cumbersome to work with, and the purpose of the change is unclear. The SPY watch also tells time now, using the PC’s internal clock, which is cute. 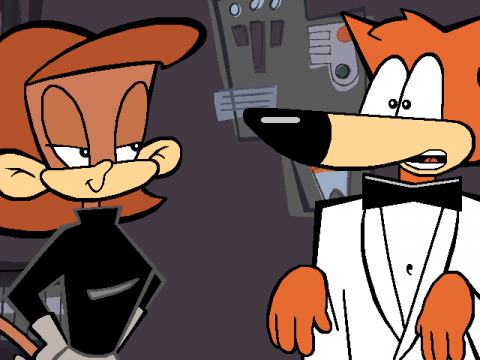 Like the other games, Spy Fox infiltrates the enemy’s base in Operation Ozone, but in this game that capability is actually open from near the beginning, with Plato Pushpin handing over his keycard for access to Poodles’ factory. Spy Fox must access Poodles’ own rocket ship within the factory in order to get the giant aerosol can’s “APD” number, as well as to neutralize the aerosol. None of this fundamentally changes the game, although it does help set the game’s further elevated stakes. Spy Fox introduces himself to strangers in this game by saying “I’m on a mission to save the world”, and he remarks in awe at Poodles’ space station when he first sees it.

The coda of the game might be its strongest part. While Spy Fox foiled his enemies in the first two games without many problems, Spy Fox’s theatricality in throwing the congeal pill actually gives away his cover, letting poodles catch it with a robotic arm. Poodles’ goons tie Spy Fox up, and the player must then get him out of a net suspended over the aerosol. Once the player does with a gadget, SPY Fox retrieves the congeal pill from a trash bin and tosses it back in. Poodles escapes and the giant can blows up.

If the player acts soon enough, Spy Fox pursues her to her secret moon base before she can put up a forcefield. The player then enters a final section where they must infiltrate the base and disable the forcefield, thus allowing Spy Corps. to apprehend her. This requires a couple simple puzzles, but the design of the moonbase itself is great, recalling the older games’ spytech designs. In the final cinematic, agent Monkey Penny confronts Poodles and breaks her nail with a karate kick. Poodles is so upset about her nail that she’s taken away without a fight, a bit sexist, but an easy way to tie up the story. In the final scene, Spy Fox gets another award, and announces his intentions to take a vacation. He’s dog tired.

SPY Fox 3 marked Humongous’s super-spy’s last adventure, as the company pivoted increasingly towards the lucrative Backyard Sports series in its later years. Operation Ozone is clearly a product of the studio’s later days, after the studio’s owner’s GT Interactive were acquired by Infogrames. In 2000, an attempt by the founders of Humongous to buy the company back from Infogrames failed, resulting in an exodus from the company of much of its talent. The firing of 40% of Humongous Entertainment’s staff followed in 2001. It’s hard not to attribute some of the things that seem “off” about Spy Fox 3, as well as other latter-era Humongous titles, to these behind-the-scenes problems. Sure enough, the credits show significantly more staff in common here with the latter-day Humongous adventure Freddi Fish 5 than with any previous Spy Fox games. Fans of the series might still find solace in the fact that the Spy Fox franchise faded away when it did, as Humongous’ adventure games dovetailed in quality afterwards.

Like other titles in the series, Spy Fox 3 has reappeared on mobile phones, Steam, and in humble bundles since its release via Scummvm emulation.

One strange feature in Spy Fox 3 is the inclusion of an EP’s worth of vocal songs on the original CD. These range from the game’s theme song “The Poodle Menace”, credited as SPY Fox theme song, to other sort of stylistic parodies of bond themes with names like “Moonbaker” and “Live and Let Fry”. Others are more related to the plot of the game at hand, like the NSYNC-esque “Where Has All The Ozone Gone”. While most of Operation Ozone’s audio is of the lower bitrates expected from Humongous Entertainment games, these are held separately on the CD in high quality and are playable on a regular CD player. These tracks can also be accessed in the in-game jukebox.

The game also features the requisite arcade mini-game, in this case the Asteroids-esque “Radioactive Trash Collector”. In this game, the player controls a truck collecting different kinds of ooze and worms that travel through the screen, while defending themselves from these pollutants. The player’s truck itself is immobile, with the mouse controlling where it shoots its trash-collecting ball. The ball flies out and returns, and can collect more than one piece of trash in one arc, so it’s imperative to try to collect multiple pieces of trash in one shot, especially in later levels. Instead of lives, the player has a health bar, and once that health runs out, it’s game over. The game also features a screen-kill attack that can be earned in a bonus level. Visually, it mostly just cycles between four locations, making for a slighter experience than Spy Fox 2’s “Things From Space”. Still, it’s more playable and approachable than Dry Cereal’s “Happy Fun Sub”, while still getting difficult over time.