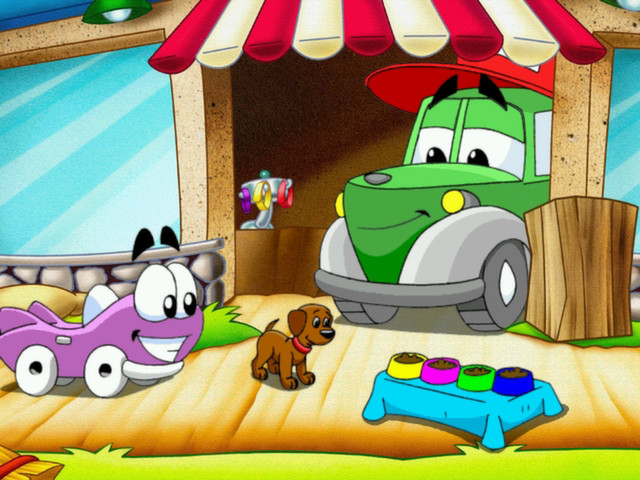 By the early 2000s, Humongous Entertainment was splintering. The company found new pressure under the possession of Infogrames, who would in 2003 rename themselves Atari, Inc. After an unsuccessful bid to buy back the company’s independence, parent Infogrames laid off 82 of the developer’s employees, over 40 percent of their staff, in June 2001. The remaining 117 were left to focus on the developer’s more lucrative Backyard Sports franchises.

July of the same year, Humongous co-founders Ron Gilbert and Shelley Day confounded Hulabee Entertainment as a way to return to their roots of kid-friendly adventure games, while increasing their own creative freedom. Forming in July 2001, Hulabee’’s formation would prove to be unsuccessful for its own reasons, releasing only a few games, most notably the SCUMM adventure title Moop & Dreadly before their own demise. 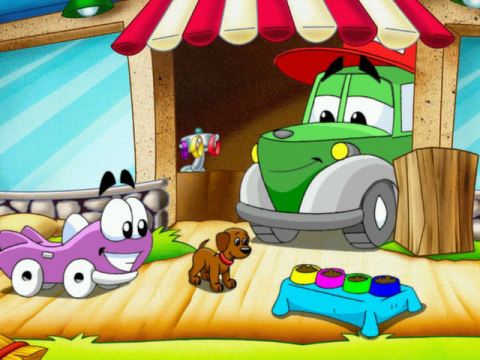 Despite this, the remnants of Humongous Entertainment released two final Junior Adventures in 2003, Pajama Sam: Life is Rough When You Lose Your Stuff and Putt-Putt: Pep’s Birthday Surprise. Both are considered low points of their respective series, and both are departures from the previous games. Perhaps most notable is the change of engine from SCUMM to YAGA, an Atari proprietary engine.

In the creative department, Laurie Bauman-Arnold, who’d written every prior game, is notably absent, leaving James “Kibo’ Parry to pick up the pieces. Parry is an odd choice for a Putt-Putt game. He’s best known as an early subversive figure of the 90s Internet known for, among other things, creating a cryptic fake religion called Kiboism. His script is a mix of puns, chicken jokes and awkward dialog. While Putt-Putt was never known for its breathtaking narratives, Bauman-Arnold’s absence is felt.

The plot seems to strive to appeal to fans of the series as a way to make up for the new staff and cast. It’s central conceit of Putt-Putt throwing Pep a surprise birthday party for the anniversary of the puppy’s adoption brings out a saccharin song that mentions both series mainstays as well as the the martians from Putt-Putt Goes To The Moon. If Putt-Putt is celebrating the dog he adopted, it seems like the largely new team is also celebrating the series they adopted. 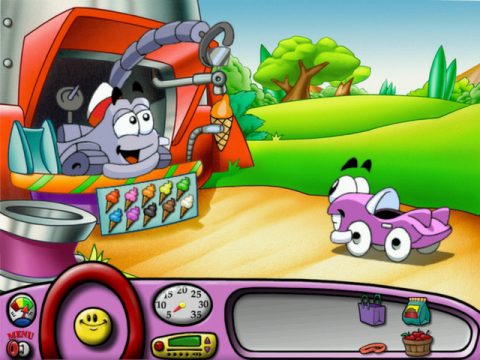 Fans of Humongous Entertainment might also recognize this plot as somewhat derivative of one of Humongous Entertainment’s first games, Fatty Bear’s Birthday Surprise, which similarly focuses on preparing a surprise birthday party. The resulting game looks like Putt-Putt, but doesn’t quite feel like Putt-Putt, and its take on Cartown feels much less cohesive than in previous games.

The game visually tries to follow its predecessors, although the animation is choppier than previous games. The HUD also mimics its series, but is clearly a new asset, with blurry, ugly soft-shading. Other assets are clearly recycled, including some music from Putt-Putt Saves the Zoo and several screens from Putt-Putt Enters the Race.

Alongside Putt-Putt, who is now voiced by Michele Thorson, almost every role has been recast. Some characters are even being played by the game’s artists, pointing to possible budgetary issues.

While other Humongous games have been kept in circulation with re-releases, those games all used the SCUMM engine and are easily played on newer machines. Those looking to play Humongous’ YAGA games must run the games natively on their computers, however. Little effort has been made to make the game compatible with newer technology, and even older machines are known to struggle with making these games work. Even when they do run, it’s often with performance issues. This isn’t to say the change of engine doesn’t have any benefits. The game’s audio lacks the harsh compression of its predecessors, for example, but by and large it’s an added hindrance to the game, especially for those who want to play it today. Perhaps it’s no surprise that of Humongous’ Junior Adventure titles, the YAGA games are also the only ones that haven’t received ports to other machines or mobile devices. While they are on Steam, they haven’t been supported with updates, and struggle to run at all. 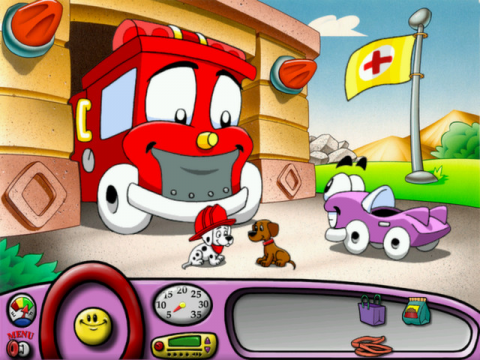 How does the game play though? Largely the same as previous entries. It’s again a game that can be solved the same way in every playthrough with a mix of item puzzles and minigames in a world of talking vehicles. Putt-Putt must get balloons, decorations, a new dog collar, a cake and a performing magician for the party. Like in the previous game and the first three entries in the series, these solutions are always found the same way. Unlike previous titles, players cannot skip game animations. All in all, it’s a clunkier experience than even the original title.

There are some nice touches to the game despite its technical flaws, too. Because the birthday party Putt-Putt is planning is a surprise for the puppy he takes everywhere he goes, the purple car begins most of the conversations in-game by finding a way to distract Pep, or by mentioning the party in secret. Some of the new characters are also fun, like the opera-singing librarian who is fittingly a library cart, or the hippie van who has a store of all free items. Some of them seem a bit out of place, however, like the humanoid balloon blowing cart who needs string to blow the balloons for the party.

When the player has finished all the tasks, the game moves forward to the next day. Putt-Putt and his friends surprise Pep with the party and Pep blows out the candles, shooting cake into Putt-Putt’s face. In the credits, the player can see photos from the party, and is asked if they want to play again.

All in all, Pep’s Birthday Surprise certainly could have been worse, but it’s hard to recommend, and marks an underwhelming ending for the series. It’s also Humongous’ last point-and-click title, perhaps fitting considering that Putt-Putt Joins The Parade was their first. With most of their initial creative staff absent, Humongous’s last games felt similarly “off” compared to their predecessors. By July 2006, the company was shut down, its name moved into a new Atari subsidiary called Humongous Inc.

Runaway: The Dream of the Turtle