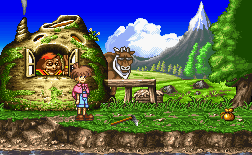 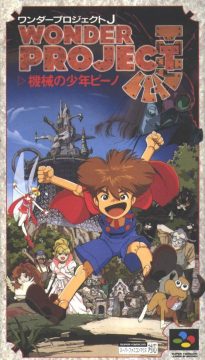 The origin of the “raising sim” is difficult to determine, but it’s probably traceable to Little Computer People in 1985. A rather nebulous term, raising sims actually encompass several different genres. Although arguably originating in the West, much like the RPG the Japanese took the idea and redefined it into something special, distinct from the more serious simulations which later cropped up; Japan has produced dozens of fantastic virtual life games, the majority of which were never localized.

One of the best and longest running is the Princess Maker series, mixing the logistics of raising a daughter with complex stat management and JRPG combat/exploration. Sega alone have been prolific in developing raising sims, producing some of the more zany examples, such as A-Life management in Nights, Chao raising in Sonic Adventure, Seaman on Dreamcast and PS2, plus never forgetting the utterly bizarre Roommania 203, also on Dreamcast and PS2. Then you have the Tamagotchi toy, Pokémon and Nintendogs to name just a few others. All of these are diverse examples in different genres, but all with the unifying trait of caring for something.

The two Wonder Project J games, although functionally similar to traditional point-and-clicks such as Monkey Island, are two of the better examples of raising sims, with sweet stories, beautiful 2D art, and a strong Osamu Tezuka (Astroboy) inspired aesthetic, plus a bit of Studio Ghibli thrown in for good measure. Neither was officially released outside of Japan, but both have been fan-translated into English and should be a priority for anyone interested in something unusual. 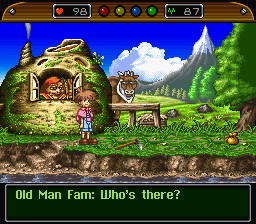 Developed by Almanic, formed by former Technos staff and who were also responsible for evolution-themed raising-sim EVO: Search for Eden on the SNES, Wonder Project J has you looking after a young robot (known as a Gijin), teaching him what it means to be human. The whole thing heavily channels the Carlo Collodi classic of Pinnochio, with the boy’s default name being Pino and his creator called Dr Geppetto (though the player can rename Pino should he wish). In order to raise the mechanical boy to be more human-like, you need to improve his stats, which constitutes most of the game. Pino has 16 personality stats in addition to stress, health and energy. Each stat falls under either Aggression, Athleticism, Intelligence or Sensitivity, with each augmented by repeating specific actions. Similarly to the Princess Maker games, different actions will raise some stats while lowering others; for example kicking a football is great for leg power, but lowers intelligence.

For those worried the game is too lighthearted, it actually has some very dark undertones. For the last 50 years humans and Gijin have lived uneasily together, with increasing bigotry directed at the robots. Humans sympathetic to Gijin are arrested, several on both sides are murdered, and the King even orders our boy sentenced to death because of his origin. Dark stuff indeed – combined with the unusual gameplay it’s unsurprising this was never localised! Here are some of the characters you’ll come across:

The young boy you’re in charge of raising. He’s rambunctious, irascible and prone to eating everything, including the very expensive items you buy to tutor him with. But over the course of the game his carefree spirit and deep-rooted good nature should endear him to you. He holds the mysterious Circuit J, which everyone seems to be after… What power does it hold?

A kind old inventor who dreams of building a Gijin that looks perfectly like a human, and he does a good job when creating Pino. All that’s left is to fill his 7 heart circuits and awaken Circuit J. Unfortunately Geppetto’s work doesn’t go unnoticed by the government. His background is further examined in the sequel.

A fairy that you control directly. In effect, an anthropomorphic mouse-pointer. Use her to pick up and drop items, plus communicate with Pino through praising, scolding or beating him round the head with a mallet (yup, it’s really no surprise this never reached the ultra-conservative West).

He doesn’t have the biggest role in the game, but this poor Gijin has nothing but bad luck. He starts out getting harassed, then shows up later on when certain unfortunate events happen, trying to protect others – make a note of him, because he turns up in the sequel, in a rather sad plot twist.

Not an important character in terms of story, but this guy sells everything you need during the game. A lot of items can also be found in certain areas, but generally this is where you go after encountering an obstacle.

This guy is a farmer, who Pino can work for to earn extra money… But is he hiding some kind of magical secret? He plays a major role in the sequel.

This Catwoman look-a-like is a thief in charge of a local gang (well, two misfit robbers anyway), stealing from the rich and giving to the poor Gijin. She warms to Pino and helps him out later on. Also appears in the sequel.

Known as Doro and Bou in the Japanese original, though the fan-translation cleverly anglicises the joke (“Robber” – geddit?). This hapless duo are Lynx’s accomplices. Seemingly never without their masks, they too turn up in the sequel.

Add is a treasure hunter who takes Pino to Treasure Island (left), while his friend Gamechi spends his time smoking a pipe dispensing advice at the docks.

A kind hearted owner of a café who likes and helps out Gijin. She also gives Pino a job as a singer, if he improves his skill enough. Unfortunately her good deeds don’t go unnoticed, or unpunished.

A Royal Guard at the castle, and one of the fighters in the Coliseum. She may look cute, but she will beat the snot out of Pino if he hasn’t trained hard enough. If Pino does beat her, then a one-eyed and bearded swordfighter named Gardy will face Pino, and he’s even tougher!

The King of Corlo Island, and not a nice guy. Astonished by the fact that Pino defeats his two best fighters in a tournament, he demands an audience with Pino where he discovers he’s a Gijin. After this, he orders Pino be executed for deceiving him. But is the King really evil, or just misguided?

The daughter of the King, she can’t understand why everyone else has such a dislike for Gijin – Messala tells her many lies about how they can’t be trusted. She’s kept safely away from the masses, atop a massive tower Pino must ascend. When you manage to reach her bedroom, she befriends the Gijin.

Prime Minister of Corlo with a shocking secret (which you’ll discover if you read the entry on the sequel, Wonder Project J2). Generally he’s a complete sinister bastard, makes everyone’s life miserable, and is very difficult to thwart. Contender for most detestable game villain ever. 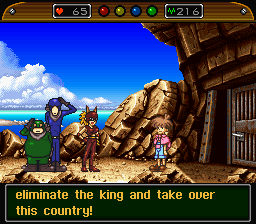 In purely mechanical terms, while WPJ controls similarly to a point-and-click, it differs in that instead of obtuse logic puzzles, progress is staggered by situations which require the boy learn some fairly obvious skills (such as picking a lock, or balancing on a ball), in addition to having the stats to perform it. Learning something requires repeating the action over and over, praising Pino when he does it correctly and scolding when wrong. So if you want to get a hole-in-one at the golf tournament, buy a club and practice his swing, then bring out the weights to build arm strength. If Pino gets upset, feeding him pudding will restore his mood, while special batteries will restore his HP and mental energy. Unlike other point-and-clicks, where you often need to solve complex puzzles to receive key items, almost everything can be bought at the local store for Pino to use.

The praise and scold mechanic is brilliantly implemented, since the boy has a personality of his own and is fairly autonomous, causing mischief until you correct him. Until he’s taught proper etiquette he’s quite likely to shred his grammar book and attempt eating the cat. Later on there are ingenious moments where you need to “unteach” various actions, by scolding the poor fellow for doing something previously taught as correct. For example whereas an early task requires he master throwing a ball, later on he needs to unlearn this otherwise he’ll throw it at a policeman with disastrous results. Each situation is still a puzzle like you’d expect in a point-and-click, except completion requires setting up domino pieces for a desired effect. You can retry failed attempts (permanent Game Overs are rare), and success proves immensely satisfying. 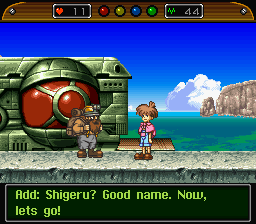 It’s not all passive interaction though, and there are a few dungeon sequences. In these Pino must be given a sword item so that he can automatically attack enemies, such as floating electric orbs. These tend to be quite easy as long as you’ve made him practise using the sword (or stick), and while there is a boss encounter, it too is quite manageable. There’s even a couple of arena fights, where instead of direct control you have to sit back and hope all the training pays off. Overall these more action-focused sections make a nice break from the monotony of making Pino repeatedly use everyday objects. Which is perhaps the game’s only intrinsic fault: teaching a child to balance on a bridge or climb a rope isn’t what everyone would describe as entertaining. Enjoying WPJ requires patience, planning and careful thought. It’s all about the characterisation and story, and building a personal connection both with Pino and Corlo island’s inhabitants.

Graphically it’s exquisite and some of the best on the SNES. Backgrounds are hand-drawn and characters have an abundance of animation – it’s not exaggeration to say there must be hundreds of frames of animation for all the detailed sprites. It’s also rather cinematic, with plenty of beautiful and lengthy cut-scenes which feel reminiscent of Osamu Tezuka’s Astroboy. The game manages to foster genuine emotion for the Gijin child; you want him to do well and, when he bests the competition at sport or swordplay, there’s a feeling of achievement. 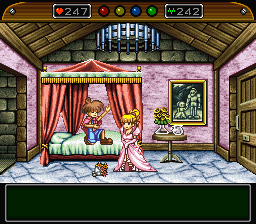 WPJ is almost unplayable to those who can’t understand Japanese. Some will argue otherwise, citing guides which walk you through it, but the real enjoyment of the game is in the character development and understanding the situation. Thankfully it was fan-translated in 2001, meaning everyone can now enjoy WPJ. Well, everyone who can read either English or Japanese, anyway.