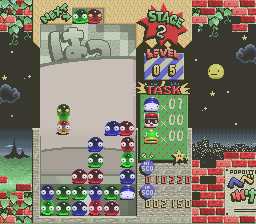 The third and last Hebereke title to be localized into English (and again, only in Europe), this game is similar to Hebereke’s Popoon from two years before, even if in practice it’s closer Dr. Mario, due to a small but substantial difference: the addition of “Poro-poros”, round creatures that look like (even more) super-deformed heads of the various Hebereke characters. These Poro-poros can be matched with three Popoons of corresponding color to erase them, but they wander around the game area, one space at a time, either up-down or left-right. This forces the player to think and act faster, because the normal Popoons stay in place when touching them (think the virus and capsules from Dr. Mario). To clear a level, all Poro-poros must be eliminated from the board.

There’s not much on offer in the gameplay options: only single player story mode and 2-player mode, wherein the characters gain special attacks when eliminating large numbers of Poro-poros. The difficulty level is the polar opposite to Popoon: the game never becomes too challenging and ends pretty soon because of that.

The only actually mildly funny part of the game is the intro from the Saturn version, where Utsu appears and tries to pass off the game as “Utsujin’s Popoitto”, before being cast aside by the real protagonist Hebe. Graphically the game is too repetitive, with the same exact background in every stage, and the glut of falling block puzzle games that were already available made this one go by pretty much unnoticed.

The game comes in three mostly identical versions: SNES, Saturn and PlayStation. The latter’s only major difference is the change of the title to Hebereke Station Popoitto. This version was re-released two times, in 1999 and 2001, as part of budget series. Like Popoon before, it was also ported to Japanese mobile phones.