It took less than a year after his debut as a helpful steed in Super Mario World for Yoshi and his colorful species to become a hit character in his own line of games. Working under Nintendo for the first time, Game Freak developed a puzzle game starring the lovable green dino for those who hadn’t moved up to the Super Nintendo quite yet. Taking cues from Tetris and Puyo Puyo, assorted Koopa baddies slowly rain down onto 4 lined plates which Mario (or Luigi, if you’re the 2nd player) much switch around to keep from stacking too high. The baddie blocks are Goombas, Piranha Plants, Bloopers, and Boos. Matching two of the same enemy on top of each other clears them away. The Yoshi element comes into play as halves of his shell occasionally rain down. Naturally, placing the top half of the egg on top of the bottom half forms a baby Yoshi, but thanks to the dinosaur’s voracious appetite, any enemy block inbetween the two halves gets scarfed away, leaving a larger Yoshi depending on how many blocks you clear. 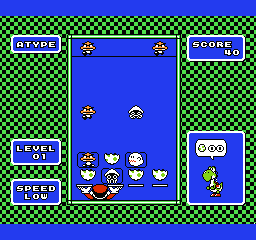 Sadly, this is the breadth of the challenge imposed for the puzzle game. The majority of the game is spent keeping the trays level with the amount of blocks, occasionally matching enemy blocks depending on luck until a top eggshell half appears to clear an ever-scaling tower of baddies. Considering there’s no penalty for switching trays with a high stack as a block is falling beside it, the game merely becomes more of a plate-spinning act until the luck of the blocks and egg shells play against your favor. Added to this is the limited options of playing endlessly or not. The 2-player mode merely allows two people to play at once until someone messes up first. There is no means for throwing more blocks to each other for better play or higher stacks gobbled away between eggs.

Yoshi‘s BGM’s are mostly forgettable filler, feeling more in line with music you’d hear playing within a castle or town in a B- or C-grade 8-bit RPG. The two exceptions to this are the tune played during 2-player matches and especially the Star Song, which has a catchy upbeat jaunt pace to it and would feel right at home in Junichi Masuda’s more popular tracklist in the first two generations of Pokémon. 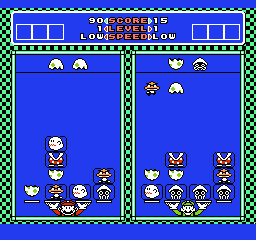 The Game Boy version suffers no major differences other than a lack of color, slightly degraded music, and needing a link cable for 2-players. Even the 3DS Virtual Console opted to have only the NES copy available. Funny enough, Nintendo seemed quite willing to just give this game away, releasing it for free to 3DS Ambassadors and having it available for 30 cents for one month on the Wii U VC as part of the company’s 30th Famicom Anniversay. As for the game itself, it’s far lacking the challenge and (arguably) the catchiness of Dr. Mario or even Yoshi’s Cookie as a puzzler, and merely served as an appetizer for later better titles centered around the cute dino. 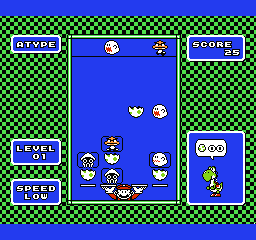