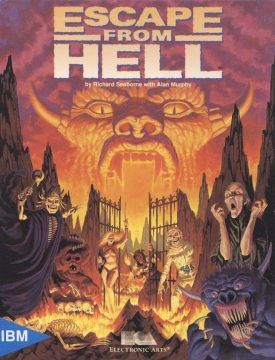 The old days of computer RPGs were mostly dominated by the fantasy genre, with titles such as Ultima, and Might and Magic being among the most popular. Every so often, a game would come out that tries to actively defy such RPG conventions. Escape From Hell puts its own spin on RPGs with a very outlandish concept, and tries to stand out with an irreverent sense of humor by setting the story in Hell. As to be expected from the era it really shows its age, but if you have tolerance for older RPG mechanics, then you can find yourself on an amusing and sometimes frustrating journey through Hell. 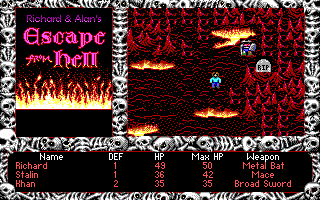 The story involves Richard and Alan, two real life employees at EA, getting sucked into Hell with Richard’s girlfriend, Alison. Richard has to save the two while fighting off the forces of Hell and eventually get back to Earth. Aiding him along the way are a variety of allies, ranging from evil historical figures such as Stalin and Ghengis Khan, to powerful rogue demons, to fictional characters such as Hamlet. The story never takes itself seriously at all, retaining a sense of humor the whole way through.

Throughout the game, you visit various locations through Hell. Much of it is based on the mythology surrounding Hell such as Limbo, the city of virtuous pagans. Other places are a bit stranger. You can go to a post office where demonic civil servants will attack you, a bar called Satan’s Speakeasy, and many other outlandish places. However, while there are normally seven levels of Hell, you only really get to see three of them, which makes the game feel unfinished. 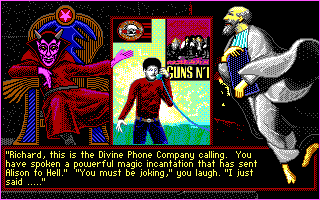 A scene from the short, but ludicrous intro

Combat is handled through menus. There are numerous weapons in Hell, ranging from maces and swords to pistols and rocket launchers, even to silly things like nail guns and hoses. Some weapons can break and others require ammunition, which cannot be replenished. If a weapon breaks or runs out in the middle of battle, you cannot equip a new one until you are out of battle. Early on, you also get the Holy Cross, a weapon that can only be used twice, and it instantly destroys whatever enemy it’s used on. It even works on the final boss, if you manage to keep it that long. 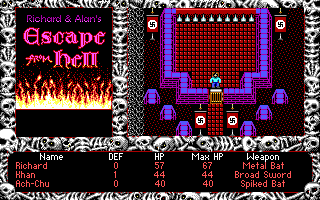 Every weapon and every enemy has a range. If you have higher range than an enemy does, you can attack them without any fear of being counter attacked, but if an enemy has higher range, you’ll be open to damage. The best strategy for this is to either run away to avoid the monster, or run and move on the map toward the monster until it’s in range and then crush it. Enemies with guns become more common as the game goes on, so knowing how to deal with ranged attacks and how to rush toward enemies until they’re in range is a crucial skill and is essential to even make it past the first world.

All characters have their own set of abilities too. Ghengis Khan and Hamlet, for example, are great at fighting. Other characters have skills that are pretty much worthless. Stalin has a high skill level in bureaucracy, which is pretty funny, but is never really useful. Some characters even have bad skills. Hitler will sometimes get into fights with your other party members, so while he comes with great equipment, he’s pretty much dead weight. Choosing your party members wisely is important, as you only get three party slots and one has to be occupied with Richard and later on, Alan, and some allies are going to be clearly better than others. 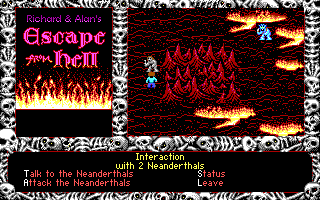 Besides making friends, you can pick a fight with just about anyone, even plot important characters. Each NPC has a “Friendly” or “Hostile” rating. If you fight a friendly character and kill them, don’t expect to come back and see them friendly again. No one stays dead in Hell and it only makes sense that someone would be sour after you caved in his or her skull with a metal baseball bat. Also, killing a friendly character in the presence of Hell Guards will get them angry. Getting in trouble with the law early on can make the game impossible to complete, so it’s probably not a good idea to go around randomly killing everyone you see, just the people that hate you. There is no shortage of people that hate you in Hell, so everything should balance out.

There are also some strange miscellaneous quirks throughout the game. You can talk to tridents jutting out of the ground. They will usually spout nonsense, like comparing the fumes of brimstone and Stenchbeast to the smog clouds around Los Angeles. Other times they will do important things such as shutting down all advanced weapons, disabling stuff like guns or change the landscape. Some enemies use guns, so doing this can be a strategic advantage. 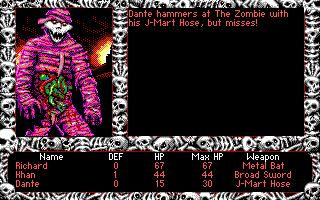 Unfortunately, the game is brutally difficult, so much in fact, that having a guide is pretty much required. It’s very easy to make the game impossible to win. Party members will come and go, taking all items they are holding with them, including essential ones that advance the plot. There are also seemingly useful items that have absolutely no use. With limited inventory and no indication of what items you need and what items you can trash, Escape From Hell can truly feel like Hell. The open ended nature of the game can also be very intimidating, giving the player very little direction as to what they need to do next, possibly off to wander into monsters that are far too strong to be fought immediately. It’s a bit grindy at times too, as most players are going to have trouble finding easy fights early on. These issues are typical of RPGs from the era, of course 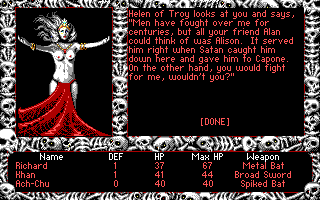 It’s also disappointing that there’s barely any sound. Music appears only once through the whole game and it’s on the title screen. Sound effects are very limited and appear only when enemy attacks hit. The game is mostly silent, which would have been a great thematic choice if Hell were a solemn and dismal place like in other portrayals. Escape From Hell, however, is more comedic wacky, making it seem a little bit incomplete. Unfortunately this is due to the game being released on the PC in 1990, before sound cards really took off.

There are also a number of irritating bugs. If you open a chest and take its items, then reload an earlier game, it will stay empty, even if you didn’t save the game. Some chests contain essential items, which complicates things even more. The only way to fix this is by deleting the game and installing it again. Some NPCs will follow you around and trap you against walls or corners that you cannot get out of. It can be very annoying and makes the game as a whole feel less user friendly. Also, monsters respawn if you save and then quit the game. If you save in a bad area, you could end up surrounding yourself in a fight you are unable to win. While the game itself is not perfect, it’s still a very enjoyable game. 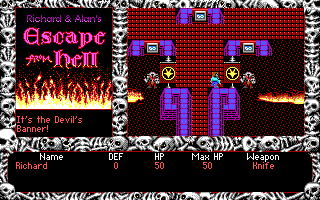 Escape From Hell shares the same game engine as Wasteland and its pseudo sequel, Fountain of Dreams. However, it has nothing to do with either of those games.

Escape from Hell had a lot of notable people working on it. Richard is named after the game designer, Richard L Seaborne. He designed and programmed the cult “classic” Awesome Possum Kicks Dr. Machino’s Butt. And Alan is named after Alan J Murphy, who did the graphics for Escape From Hell. His career is pretty expansive, including Atari ports of Hard Drivin’, Gauntlet, Xevious, Pac-Man, Defender, Blasteroids, and many others. He also worked on Fountain of Dreams, Frequency, B.O.B., Awesome Possum, and lots of other games from before EA became the sports juggernaut it is today. The producer was Dave Albert, who was also the producer of Wasteland, The Bard’s Tale III, and the executive producer of Gex: Enter the Gecko on the N64. He also designed and programmed Fountain of Dreams. 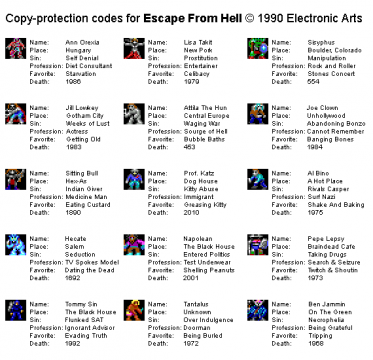 This game also has some cool copy protection. You have to look up various character bios, including their name, when they died, what their sin was, and their favorite way to torment people.