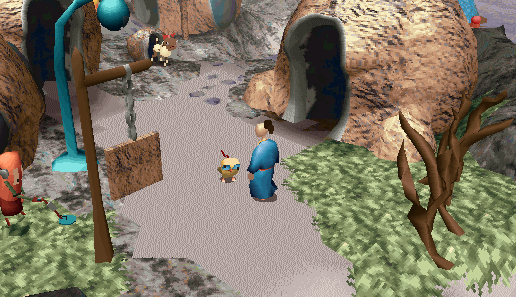 Following the completion of the original game, Adeline Software pursued a different project known as Time Commando, which was released in 1996 on the PC, with Saturn and PlayStation ports appearing slightly thereafter. Time Commando was a side-scrolling brawler, which used video-based backgrounds and geometric characters. It was an interesting experiment, which unfortunately holds up very poorly today. Alongside Time Commando, however, the original team was busy working on a sequel to Little Big Adventure. Known as Twinsen’s Odyssey in the US and now published by Activision, Little Big Adventure 2 set out to deliver a much larger adventure that would take place across multiple planets, while introducing refinements to the graphics engine and gameplay mechanics. The result was an experience even more memorable than the original game. 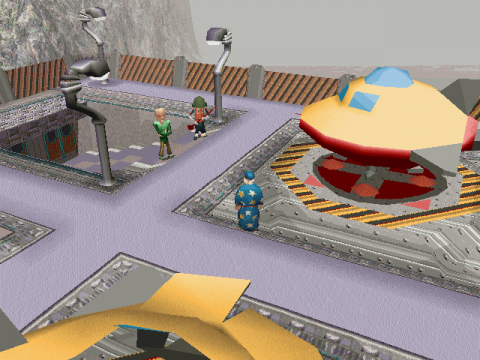 Following an introduction narrated by Twinsen explaining the events of the first game, LBA2 begins when the usually calm weather of Twinsun is disrupted by a sudden and violent storm. On Planet Twinsun, weather wizards are responsible for stabilizing the climate so a storm of this magnitude is simply unheard of. Unfortunately, Twinsen’s trusty DinoFly is caught in the storm and crashes nearby, leaving Twinsen with his first objective; employing the services of a healing wizard. In order to reach the healing wizard on Desert Island, however, you first have to end the storm with the help of the local weather wizard. As soon as the clouds are eventually cleared, however, strange aliens who call themselves Esmers appear under the guise of a diplomatic mission. They offer to share their advanced technology in exchange for help from the wizards of Twinsun. Their home planet Zeelich has become plagued by toxic gasses rendering the surface unlivable and driving them to build structures into the sky. They claim to require the help of Twinsun’s wizards in order to help restore their planet. Shortly after their appearance, however, both the wizards and their children begin to disappear. Suspecting foul play, Twinsen trains at the School of Magic in order to become a wizard himself and accept the Esmers’ offer to visit their home planet. As Twinsen soon discovers, the Esmers are planning to use the kidnapped inhabitants of Twinsun as a sacrifice in order to revive the great Dark Monk who is supposedly capable of restoring Zeelich to its former glory. Upon arriving on Zeelich, Twinsen is arrested and thrown in prison. With the help of a fellow inmate, Twinsen manages to trick one of the guards and escape to the shuttle bay in order to return to Twinsun. After crash landing on Citadel Island, Twinsen emerges from his craft only to discover that his planet has been conquered by the Esmers and all citizens have been placed under martial law. With the help of his friends, Twinsen must save his own planet once again and put a stop to the Esmers’ plan.

As with the first game, progress through the story is linear, but the player can freely explore the world. The puzzles this time tend toward the more task-focused with NPCs asking Twinsen to retrieve items or perform actions in order to progress. Early on Twinsen gains access to a hand radio allowing communication with NPCs anywhere in the field, which provides updated objectives without the need to return to its originator. The game is, for all intents and purposes, broken up into different acts with the jump between planets acting as a bridge. The first act on Twinsun is a mostly upbeat affair with plenty of dialogue sequences, fetch quests, and mini-games awaiting the player. Just as you become comfortable with the wealth of dialogue and cheery atmosphere, the game whisks Twinsen off to the alien planet Zeelich which is almost completely devoid of NPCs capable of communicating with Twinsen. You see, the native inhabitants of Zeelich don’t actually speak Twinsen’s language, and without the translator you receive later, their text appears as a series of random characters. In that sense the game really delivers the feeling of travelling to a faraway planet. By the third act, when you return to a now conquered Twinsun, things change even more as you must now rely more heavily on stealth and speed to travel about areas you freely roamed just hours before. The shift in atmosphere each time you travel to a different world really helps build a genuine sense of progression and place. 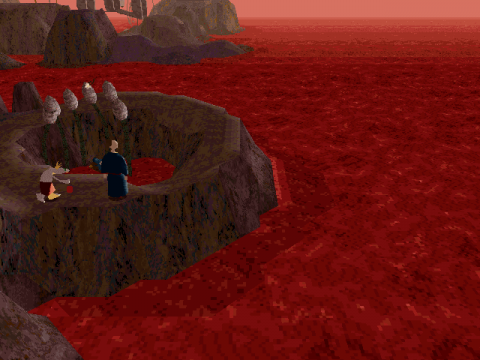 The core gameplay mechanics remain much the same as the original game, with a handful of improvements here and there. The tank controls and behavior system from the original make a return but the addition of a dedicated use button solves the issue of needing to constantly change behavior modes. Movement is smoother with Twinsen now able to run into walls as much as he likes without taking damage. A sidestep maneuver was also added, enabling the player to avoid some enemy attacks in combat, though it’s a bit too sluggish to be of any real use. An improved holomap system is available, offering detailed views of each island you may be visiting along with objective markers pointing out your next destination. It’s much easier to determine where you should be heading next and a lot more fun getting there thanks to the addition of drivable vehicles. That’s right, this time around you can actually make use of alternate forms of transportation including a desert buggy and a jetpack.

You’re certainly going to want to use them, too, as the world itself has been expanded greatly in all directions. Despite this increase in size, however, there’s also a similar bump in density. There’s simply more to see around every corner. Perhaps what contributes most to this new sense of wonder are the greatly improved visuals. While indoor scenes retain the same isometric viewpoint of the original game, a new 3D graphics engine was created for the display of outdoor maps. This allows for more complex terrain, supporting more than 10,000 gouraud shaded and textured polygons per scene. As with the first game the camera doesn’t actually move along with Twinsen. The choice to redraw the scene only when the camera is adjusted allows for much more complex 3D environment than would otherwise be possible with 1997 technology. It achieves the same dramatic camera angles that would be expected from fully pre-rendered backgrounds while allowing the player to change the camera angle at any point. The change in rendering technology fundamentally changes the way maps can be designed and greatly increases freedom of exploration. 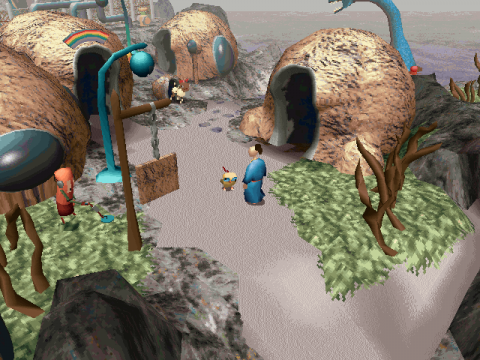 Unfortunately, this freedom also leads to some control issues. Jumps can become more difficult to line up with the new camera system and enemies can become obscured by the terrain. Natural obstacles such as water and lava remain, posing more of a challenge this time, particularly when one is asked to jump between narrow, moving platforms. The jetpack you obtain halfway through the game helps eliminate some frustration, but it’s still not always clear which areas can be safely traveled. The magic ball returns and is just as frustrating to aim as in the first game. When coupled with more numerous enemies and less predictable camera placement, it can be difficult to dispatch of your foes effectively. Twinsen eventually gains access to a saber and a laser pistol, both of which improve combat a bit, but do little to ease frustrating moments.

The score was once again composed by Philippe Vachey and is perhaps even more memorable than his work on the original. MIDI was ditched entirely in favor of digital audio tracks alongside the Redbook audio, allowing the quality of the music to remain consistent from area to area. The entire game is voiced once again by much of the same cast and remains as amusingly strange as ever. 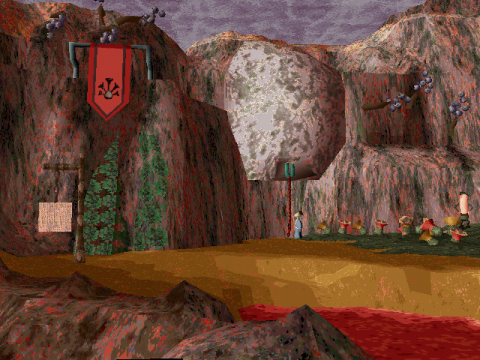 The game was released with both Windows 95 and MS-DOS executables on the disc. The 16-bit Windows version of the game isn’t compatible with modern 64-bit versions of Windows without resorting to a virtual machine. Without a source port available, most gamers will need to rely on programs such as DOSBox in order to properly run the game. Fortunately, DOSBox performs admirably and is able to run the game without any problems. No console port was released, unfortunately, and the game itself remains fairly rare on disc, leaving digital distribution options (such as GOG.com) as the easiest method of procurement.

When you reach Island CX near the end of the game it is actually possible to uncover a secret room where you will discover one Stanley Opar, the main character from Time Commando. He puts up quite a fight, however, so be ready.