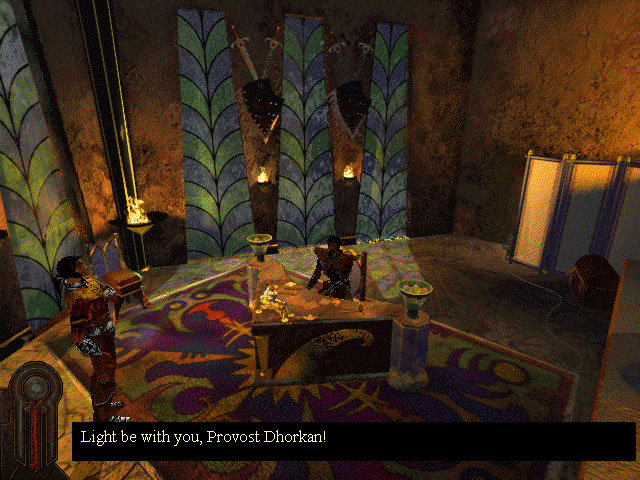 In 1997, a year in RPG history, the year of Fallout and Final Fantasy VII, there was another post-apocalyptic steampunk RPG contending for the genre’s throne – a fully voiced, genre-bending gem, overshadowed by its massive peers. Now long forgotten, banished to the recesses of the internet where games without a Metacritic score and insufficient GOG-votes dwell.

Dark Earth is a post-apocalyptic RPG in the body of an Alone in the Dark-style action-adventure. It was developed by French studio Kalisto Entertainment, formerly Mindscape, as the first of an intended franchise. It’s light on the stats and action of each respective genre, but heavy on the story and puzzles. It also has that slight Survival Horror flavor, not only in look and feel, but also due to some stealth sections and the occasional fights. But where the game truly shines is in its expansive backstory and unique setting. The attention to detail in the pre-rendered backgrounds, the design of the characters, the scrolls of Sunseer lore, they all work together to really bring the Stallite Sparta to life, helped by the superb voice acting and smooth dialogue.

A great disaster struck the Earth, now known only as the Great Cataclysm, enveloping the planet in an ever-growing black miasma. The few survivors that were left managed to find refuge at the top of a large plateau peaking above the everlasting sootclouds. They called the stallite Sparta, in honor of the Sun, and made the spire their home. Many generations later, the Sunseer civilization is ready to cautiously explore the Darklands of the blackened earth below. 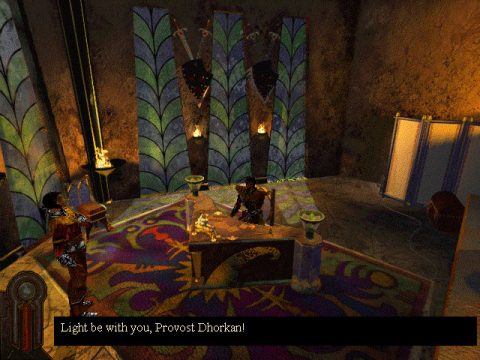 You are Arkhan, son of Sunseer Rhylsadar. As you awaken next to your girlfriend from the lower-quarters, Khali, you lament your existence as child of a high priest. Doomed to a life in servitude to the Sunseer’s protectors, the Guardians of Fire, Arkhan dreams to be like his friend Zed, adventuring through the Outlands in search of treasures from Before. But alas, Provost Dhorkan rudely reminds him of his responsibilities. But on his first mission to defend the palace gates, assassins of a rebel faction, the Konkalites, attack. In his defense of the Sunseers Arkhan gets hit by a mysterious poison, Shankr Archessence, infecting him with the Black Rot, which slowly turns him into a monstrosity.

As Arkhan you can function in three modes – friendly, aggressive and (after infection) monstrous. This mode influences not only his attacks, but also his interactions, with the world and the characters inhabiting it. Normally Arkhan will use a doorknob, but in pissed-off mode he’ll kick that door down. A friendly inquiry will sound like: “Excuse me, miss, could I bother you for some information?”, while a forceful growl gives you an; “Information, bitch, now!”. It has an effect on Arkhan himself as well, being more monstrous also hastens his hideous transformation, putting a nifty use-limit on your acts of coercion and senseless aggression. This forces you to maintain a balance between combat and conversation. 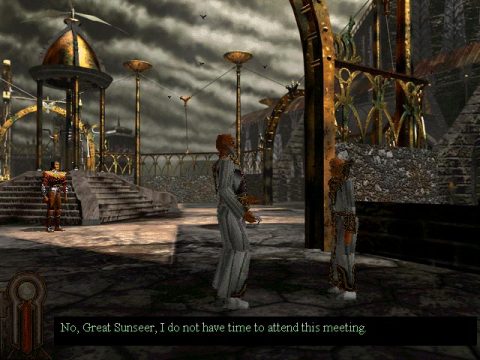 The real-time battle system, featuring hand-to-hand, melee weapons (swords, clubs and axes) and later gunplay, feels brutal, but old-school clunky. Arkhan will first have to change into his fighting stance, changing the movement style from tank-like to strafe-step, then press and hold the attack button and finally press a direction to attack. Forward is a forward slash, left is a left hook, back is a kick, etc. It takes getting used to, and leads to slow, stumbling, caveman-ish fights, but the hits have decent impact and every weapon type has slightly different movesets. Aiming with projectiles is a painful precision process. But the unpredictable combat, in combination with the gradual shift to firearms and limited ammo (which you have to smelt yourself), reinforces the survival horror element.

But the game’s main focus is its story and puzzles. After the introduction you’re free to wander around the upper levels of Sparta, explore the detailed environments and interact with its denizens. Before you partake in your first mission and start your adventure, you can already uncover a great deal of information about the world’s history and hierarchy. There is no handholding and the path to the plotpoints are for you to find through cryptic clues and pure exploration. 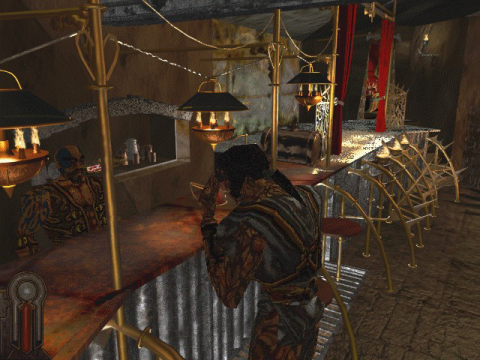 The puzzles range from adventure-style dialogue, inventory and panel-puzzles, to RPG-ish item-hunts and environmental challenges. Most of them are fairly straightforward, but there are some doozies thrown in. One of them is the infamous Yong match, a Go-type boardgame against an insanely good AI, resulting in only two correct possible movepaths. Most are less static and more intricate, but easily understandable. And you can always ask the blind old Archivist for info about your acquired items.

Your inventory is quite expansive. There are quest items to find, hint scrolls to read, food to scavenge and flasks to fill. Every character you kill also drops the weapon he was wielding. An item can be examined, combined and held. Using the action button to wield, use or consume what’s currently in your hands. Making drinking that Stohl Gourd to heal during combat pretty problematic. Luckily you can assign the number keys to your favorite weapons and items, for a much needed quick select, especially since the weapons in Dark Earth degrade rather quickly. When swinging your mace about like a madman, hitting more wall and floor, than meat and bone, it won’t take long before it breaks and you’re poking your opponent with a handle. 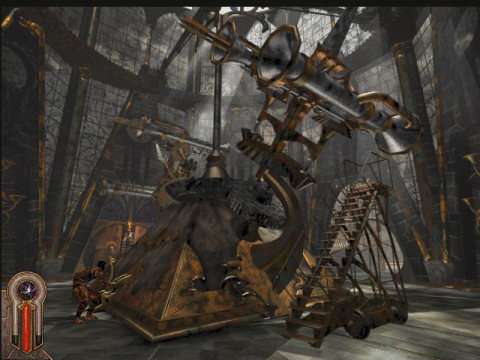 Aside from brightness, colo- and volume-sliders there are no options. And getting the game to install and run smoothly on any system after XP is, even for an experienced emulator, a patch-heavy nightmare. There is a character model viewer though, where you can switch between three different shadow and lighting types, or leave it on auto and let it adjust itself to the setting.

Saving is done at Sun Seals, scattered generously throughout the Stallite, by asking the Sun-God to bless you with his rays. And apart from a weird fourth wall break early on (a storage room in the early area which serves as the opening credits), the attention to detail help to immerse you further into its world. Also helping immensely in that department is the sound design. Well done and perfectly timed voiceacting, nice ambient effects and occasional splashes of music help give weight to the entire experience.

As your main quest shifts between seeking revenge on the Konkalites for poisoning you and finding a possible cure, you’ll quickly become involved in a larger power struggle plaguing Sparta. And it’s up to you how to uncover the clues, through conversation, coercion, stealth or brute force. Most situations support multiple methods, extending as far as simply killing all Guardians and friends you encounter. You can even attack the extremely helpful wheelchair-bound mechanic of the lower-quarters, Danrys, who repairs and scavenges items for you, although the fight may be harder than you can handle. 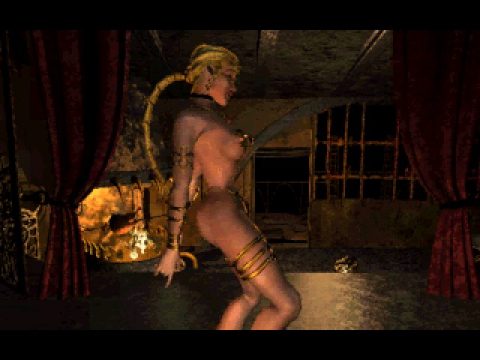 Many characters offer different information when approached friendly or angrily, however, but even horrified or alerted guards can sometimes be persuaded to sheath their swords. This approach is not as effective against bow or blunderbuss wielders though, even less so against the beasts dwelling in the darkness below.

To summarize this hard to define hybrid: The deep story and lore of an RPG? Check. The puzzles and exploration of adventure games? Check. The clunky, but strangely adding to the tension, survival horror combat? Also check. It inhabits a sweet spot between overlapping genres, where it builds a vast city, divided in sections, each with their own atmosphere and style. But it’s ultimately cut-off from the world, doomed to solitary, engulfed by the black shroud… 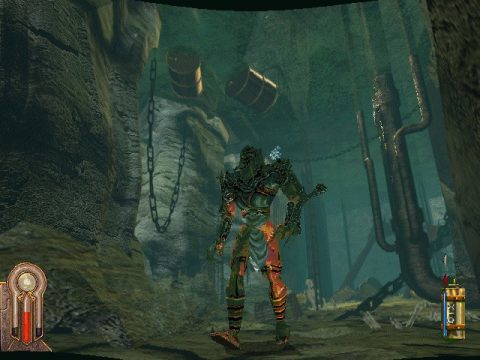 Alas, this was the first and last game of the series. Dark Earth launched to positive reviews, but average sales. Despite interest in the IP, the PS1 port fell through. A PlayStation 2 sequel, Silent Chaos, was in the works (with the aid of Squaresoft), but it got cut early in development, as a result of the overproduced and underachieving Nightmare Creatures II. Two years later, Kalisto closed their doors. And the rich world thought up by Guillaume Le Pennec and designed by Sylvain Dousset and Frédéric Menne, was doomed to obscurity. It did spawn a semi-successful pen and paper RPG though, with sourcebooks, adventures, novels, the works!