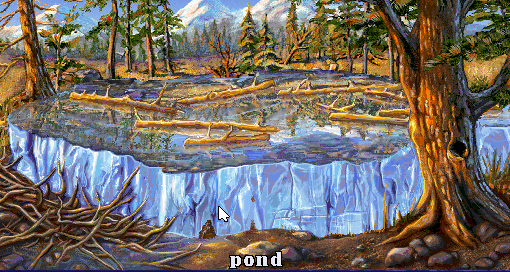 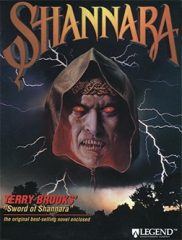 Terry Brooks’ Shannara series is one of the most prolific of modern fantasy novels, consisting of over twenty entries over the course of nearly thirty years. Legend Entertainment, fond of creating graphic adventures based on books, developed their own entry into the series, simply dubbed Shannara. It’s technically an original story, although it functions as a sequel to The Sword of Shannara, the very first book, a copy of which was bundled along with the packaging. In the game, you play as Jak Ohmsford, son of Shea Ohmsford and hero of the first novel, who learns of the return of the Warlock Lord Brona, commander of the undead. He can only be defeated with the Sword of Shannara, which has, as luck would have it, been broken and rendered unusable. Only by venturing through the land can Jak and his companions reassemble the sword and defeat Brona once again. Your quest is doubly important, because Jak’s life is inadvertently pledged to Brona during a summoning ceremony, dooming his eternal soul unless the nefarious lord can be stopped. It’s easy to jump into the story if you’re unfamiliar with the series, because while there are numerous references to The Sword of Shannara, it’s never completely reliant on it. 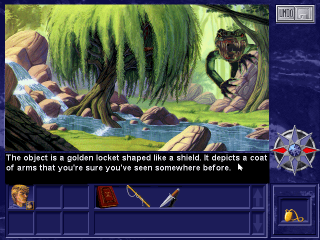 When Brooks first published The Sword of Shannara in 1977, he was heavily criticized for blatantly ripping off J.R.R. Tolkien and his Lord of the Rings books. The game hews closely to those themes, and thus it never wanders from the established fantasy tropes. Jak is accompanied by his lady friend (and obvious love interest) Shella, as well as a spritely elf sage named Davio, a stumpy dwarf named Brendel and a troll named Telsek. Each new village brings the group together with another race, whose traits should sound more than familiar. The dwarves are stout and hairy, the trolls are violent and stupid, the elves are snobbish and pompous, and so forth. During your adventures, you’ll have to defuse the war between trolls and elves, uncover the secrets of the legendary Elfstones, solve a mystery with the dwarves involving a missing axe, and save a castle from a marauding horde of zombies. There’s little to set it apart from any other fantasy universe, which makes the proceedings feel somewhat bland.

It doesn’t help the game feels remarkably stripped down compared to Legend’s previous games. Since their graphic adventures evolved from text-based games, their eloquent and detailed writing helped set it apart from the crowd. Their previous titles, Death Gate and Companions of Xanth, both based off other fantasy novel series, contained far more descriptive text, and much, much more dialogue. In Shannara, conversations are sparse and straightforward, and you can’t talk to anyone beyond what’s relevant to the plot, making the world feel strangely empty. When tragedy befalls your friends, it’s hard to feel much for them, because they barely have much in the way of personality. The world is quite pretty, at least – the lush, colorful SVGA graphics are a huge leap beyond any of Legend’s previous games, and the detailed character portraits when talking are much improved – but it hardly makes up for its deficiencies. The game is essentially broken up into small chapters, and each chapter is rarely more than a couple screens in size – the standard automap function from other Legend games is gone, because it clearly just isn’t needed. 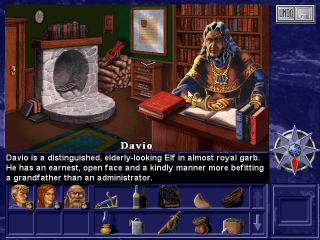 To differentiate itself, Shannara is set up a little bit like a role playing game. You travel between towns via an overhead map, not too dissimilar to Ultima or other classic RPGs. It’s really just an illusion of freedom, though, because your quest is quite linear. Venturing off the path will either result in your party members redirecting you, or plunging you right into a group of monsters. There are a number of fight scenes, with CG-rendered enemies taking the center stage, but beyond a few specific areas where you need to use special items, there’s no strategy other than continuously hitting the “Fight” command. There’s no point to combat either, since there’s no experience system or any upgradable equipment. These parts feel like a dumbed down version of Superhero League of Hoboken, another Legend game which is a RPG/adventure game hybrid. During the adventuring segments, your party members’ portraits appear at the bottom of the screen, but other than a few specific instances – Shella can shoot things with her bow and arrow, Telsek can lift and smash stuff, and Davio can use his Elfstones for magical purposes – they’re little more than expanded inventory slots.

All of this is particularly disappointing, since the game was designed and written by Corey and Lori Cole, the husband and wife team behind Sierra’s Quest for Glory series. These were extremely innovative games that melded RPG mechanics onto graphic adventures, and it would logically seem like they’d be the best folks for the job. But not only are all of the RPG elements in Shannara tacked on and pointless, but the text is totally missing the devious humor that made Quest for Glory so amusing. The writing isn’t bad, but since it follows after Brooks’ style rather than their own, it’s pretty flavorless and lacks distinction. At least the convincing voice acting helps the text from becoming too droll. 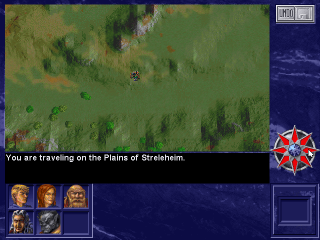 The whole package seems like it’s aimed towards novices, those familiar with the Shannara novels (or at least fantasy fiction in general) but unfamiliar with the adventure gaming genre. As much as Legend’s games have usually been quite excellent, they could get quite difficult, and the text could become overwhelming. By cutting those back, Shannara makes itself welcoming to newbies, but beyond the pretty graphics, it’s missing what makes Legend’s games so worthwhile. The result is something remarkably average. 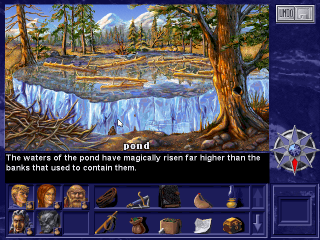