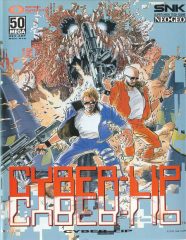 It’s hard to imagine a time when the Neo Geo wasn’t all about fighting games. But before SNK caught the Fatal Fury / Art of Fighting / King of Fighters bug, their library spanned most of the popular genres of the early 90s. Cyber-Lip was their tribute to side-scrolling run and guns like Contra, and feels like an obvious predecessor to Metal Slug. 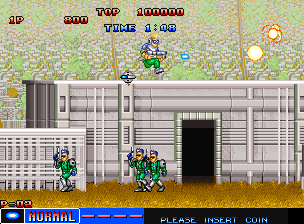 The storyline is unabashedly stolen from The Terminator – it’s the future, and humans are stupid enough to build a sentient super computer to protect their space colony from outside invaders. This computer is named Cyber-Lip. Now, we’re all familiar with how the Japanese will stick some random English words together without any regard to their meaning, but Cyber-Lip is literally a gigantic talking mouth. Except it’s equipped with lasers and missiles and poor spelling, per usual SNK standards. In any case, as to be expected, Cyber-Lip decides to go mad and unleash an army of cyborgs to crush and kill everything in site. They do a pretty good job, evidently, since you see the destroyed remains of the Statue of Liberty in the background of the first stage. As one or two commandos – named Brook and Rock – it’s your Earthly duty to put a stop to the evil computer and blow a lot of things up along the way. 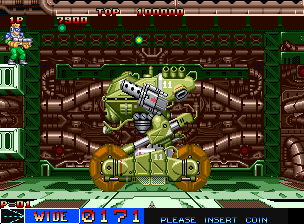 For the most part, this is all stuff we’ve seen before. The only difference between this or Contra or any other similar game is that you can stockpile weapons and switch between them at any time. Even if you get killed, you can just switch back to the flamethrower or bazooka or machine gun. There is limited ammo, so you need to be smart about conserving unless you want to get stuck with your dumpy little pea shooter default gun, but there are plenty of power-ups to be found, including Rolling Thunder-style reload rooms. You can also get little orbs that rotate around your guy and help protect against bullets. About the only problem is that you can’t shoot diagonally. 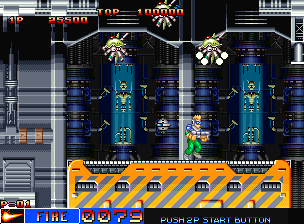 Like many Neo Geo games, there’s a gratuitous use of voiceovers, as if to brag “look how much space we’ve got on our cartridges!” The bad guys occasionally shout out vaguely coherent taunts like “you’re doomed!”, your guy while screams “I’m a goner!” when he’s lost his last life, and an omniscient voice occasionally tells you to “look out below!” when crossing over precarious chasms. Unfortunately, the music quality is pretty bad, and just plays quietly in the background, hoping no one will notice how crappy it is. Similarly, the graphics are just kind of okay – even for an early Neo Geo game, it doesn’t stand up to the likes of, say, Magician Lord. There are some impressive looking bosses, including one that’s a pretty obvious ripoff of the huge alien head from the original Contra. However, Contra: Shattered Soldier seemed to repay the favor years later by featuring a boss where you’re hanging on a pipe and need to fire straight downward into the enemy’s weakpoint – which is almost exactly like one in Cyber-Lip. 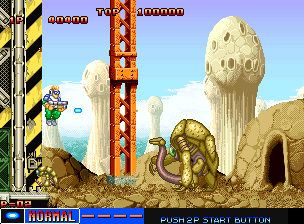 Cyber-Lip is a decent game, but there’s little here that hasn’t been done better in other games, especially Metal Slug. So, oddly enough, it’s the game’s story – or, rather, the ending – that sets it apart. After each level, you’re given orders from the President (presumably American, since he speaks English even in the Japanese version.) When you finally reach the evil computer, he confesses that he is not “insain” but has rather been “evilly reprogrammed”. You obey your orders and kill it anyway. On your trip back to Earth, your commander congratulates you on a job well done. But then he starts talking craziness about how “there are no more obstacles in our way” and “the earth is ours”. Then his eyes glow red and the credits start to roll. It then hits you – you’ve just been a pawn. It’s never spelled out directly, but the aliens had introduced a virus into the Cyber-Lip computer, causing it to attack humanity, and you’ve been manipulated into destroying it so the aliens can finish their invasion. Contra III ended up with your heroes landing in the middle of a crowded city, lauded as the savior of humanity. Cyber-Lip never gives you a “welcome home” parade – you just continue your trip through space, unaware of whatever kind of terrors you’ve inadvertently brought onto the human race. It’s a little bit heavy for a game like this. 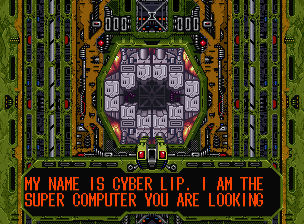 Cyber-Lip was never ported to any system other than the Neo Geo, even though the SNES probably could’ve handled it. Although it’s an early Neo Geo cart, both the home cartridge and Neo Geo CD version still tend to fetch a bit more money than the average game from around that time. 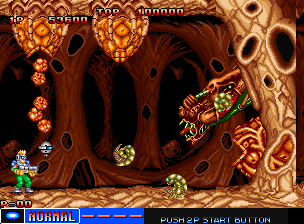 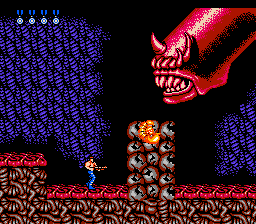 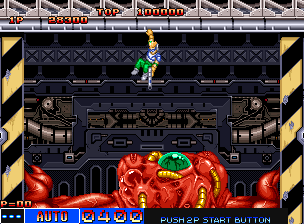 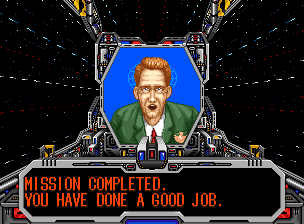 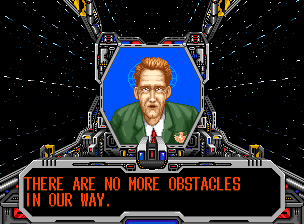 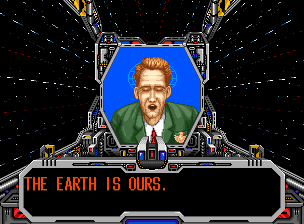 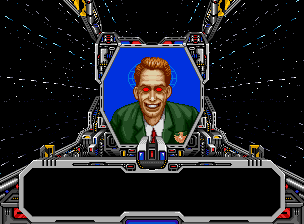