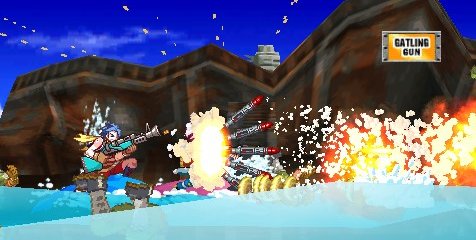 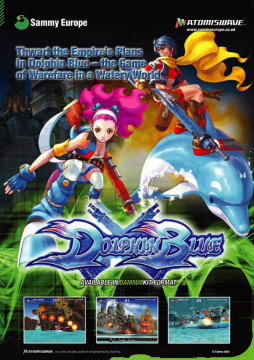 Dolphin Blue is a bit of an oddity. Developed and published by Sammy for their Atomiswave hardware, it’s a run-n-gun arcade game released in 2003, at a time when run-n-guns were mostly out of the mainstream. It’s also very obviously inspired by Metal Slug, which was, not coincidentally, the only other run-and-gun series that was still on the marketplace at this point. 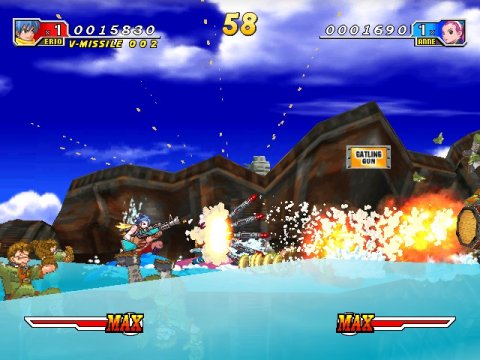 You play as one of two characters – Eiro, an arms dealer who is looking for some action, or Ann, a soldier who is out to protect the local kingdom. Each of them also have their own pet dolphins, which are blue and pink, respectively. The game is set in the future, and a major incident has transformed what used to be a peaceful nation into a troubled land of waste and ruin, damaging the Earth’s surface and immersing most everything underwater. The heroes have to protect the Earth’s remains from an evil empire that wants to take over the world, and rescue a princess figure in the process. The premise was almost definitely inspired by Waterworld, a movie released a decade earlier.

Dolphin Blue‘s five stages are divided over three different styles of gameplay – on land, over the water, and underwater. The land sections are the most reminiscent of games such as Metal Slug. The above water sections are auto-scrolling as players ride their dolphin above the waves, and are similar to the vehicle stages in Contra. And the underwater sections are much slower and similar to horizontal shoot-em-ups. Enemies range from standard ground troops to armored tanks and even battleships and dropships. There are extra weapons too, with limited ammo, including Gatling guns, heavy Gatling guns, two different types of missiles, and a gun called the “melt gun” that shoots flares like a machine gun. Like Metal Slug, you can also stab enemies if they get close enough. 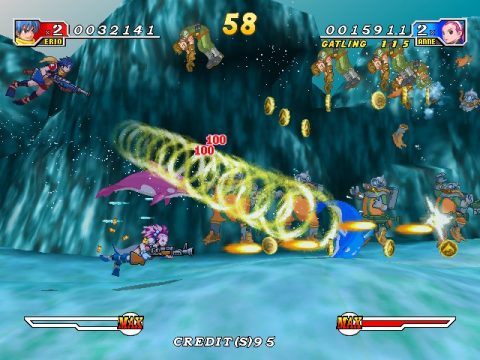 In addition to your equipped weapon, you can also use a special attack. On land, your character dashes forward, launches up in the air, and shoots a few missiles at the enemy. It’s a useful maneuver to attack enemies from behind cover. Over water and underwater, it makes the dolphin launch forward straight and boomerang back to your character. This isn’t quite as effective since it’s hard to control its trajectory. This special attack is powered by a meter, which fills up to three levels automatically over time. You can use the special attack whenever you want, but it will be more effective based on how full it is.

The world of Dolphin Blue takes on the look of a city devastated by war and immersed in water. Once vibrant Japanese towns are now in shambles with nary a civilian in sight. Warships roam rampant over the new oceans. The players and enemies are drawn with sprites, while the backgrounds and larger vehicles are modeled with polygons. It’s similar to Capcom’s Strider 2 from a few years prior, though it looks much cleaner thanks to the arcade board’s higher resolution. The style is also reminiscent of Hard Corps: Uprising by Konami, which was released several years down the road. The characters are drawn in a bright anime style and are quite well animated, consisting of many little touches, like the diver enemy’s suits inflating when you shoot them. The polygons have that certain classic Naomi charm, where they’re not as shimmering as the PlayStation or blurry as the Nintendo 64, but still simple enough to be considered low-poly (although the water effects do look a bit antiquated). There are a number of cool details throughout, like your dolphins appearing far in the background as you fight on land. Many of the levels have you chasing the enemies as they escort the kidnapped princess to their base, giving a sense of urgency to the action. Though many of the bosses ride assorted vehicles and machinations, they’re introduced by portrait at the beginning of the stage, giving the game some extra personality. 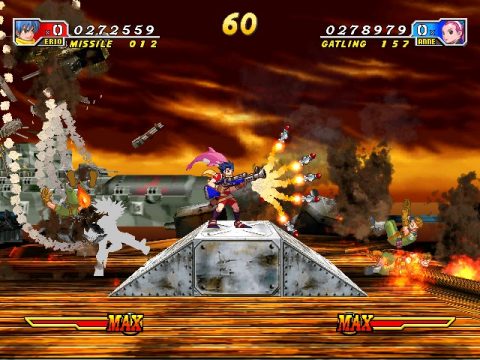 The soundtrack does a really good job of building up tension and action as well, consisting of orchestral scores that almost sound like they’re lifted directly from the Metal Slug series. It should be no surprise that the composer, Akihiro Uchida, was a composer for SNK (though he mostly did music for The King of Fighters games and never worked on a Metal Slug game). The sound effects are alright, although the death screams of the player characters can get a bit annoying after a while, especially for how frequently they happen.

As expected for an arcade run-and-gun, Dolphin Blue is extremely difficult, often even more so than the Metal Slug games. You start with three lives, you die in a single hit, and there are no shields or extra lives. Weapon power-ups are not as prevalent as they should be, and your main weapon is ineffective for anything but the simplest enemies. And since there is no automatic fire, you need to hammer the fire button to get a constant steam of bullets. Additionally, the special attack that replaces the grenades/shells in Metal Slug is not nearly as useful, since it directly puts you in danger, plus it can’t be used as often. As a result, unless you play perfectly, you’ll be constantly overwhelmed by the enemy forces. 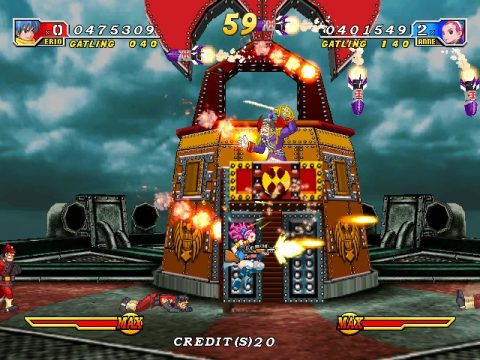 Despite the unique setting, there’s nothing particularly original about Dolphin Blue other than, of course, the dolphins. Pretty much everything else it does can be found and executed better in the Contra and Metal Slug games. However, even if it’s somewhat unpolished, it has a great visual style, and it’s still worth checking out for anyone interested in an offbrand run-and-gun. It was never ported to any consoles, and it’s reasonable to assume that it was probably a commercial failure – after all, it was definitely a fish out of water in the mid-2000s arcade marketplace.