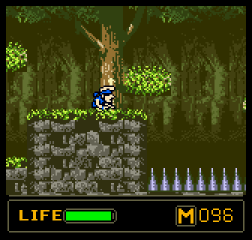 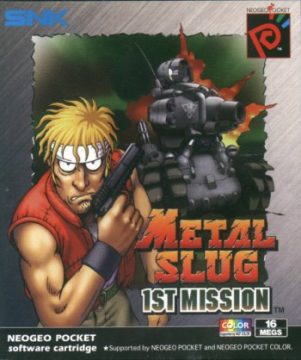 The Neo Geo Pocket Color may not have lived long, but the quality-to-crap ratio is astoundingly high. It’s especially surprising that most of the games for it were downscaled versions of arcade games from a monumentally more powerful system. But SNK handled their properties quite well, resulting in quality portable versions of King of Fighters, Samurai Shodown, Last Blade and others. They looked and played quite differently, but still managed to be remarkable. Metal Slug also got this same quality treatment – it’s structured differently from the arcade installments, but manages tailor the experience to a different audience. 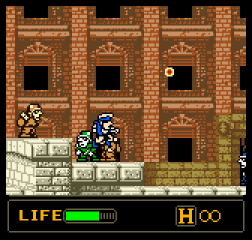 Obviously, the game doesn’t look or sound nearly as good – the backgrounds are okay, but the characters suffer from the NGPC color limit for sprites, which in this case, was mostly done to support compatibility with the original Neo Geo Pocket. The gameplay is pretty much the same, though it’s lacking a lot of weapons, and tossing grenades requires that you hit the Option button to switch weapons. You also have a life meter and can sustain multiple hits, but only have one life. There are no bottomless pits, but there are spikes, which are definitely out of place. There are also a lot more auto-scrolling vehicle stages. However, SNK added a ton of replayability by including non-linear levels and branching paths. There are over fifteen stages in the game, some of which are maze-like and require a bit of exploration to reach the end or find all of the prisoners. Your performance in one stage can effect which level you visit next. For instance, if you die in a certain level, you can end up next in a prison camp, forced to fight your way out with only a knife. There are other cool scenes too, like parachuting segments. So even though it can’t replicate the graphics or even the intense action of the primary Metal Slug games, it provides a unique experience that stands on its own merits.