The third Metal Slug is heralded as the apex of the series. Why?  For starters, there’s a huge amount of creativity in practically every level. More than just soldiers (and aliens), there’s an even greater variety of weird enemies to fight. The first stage pays tropical island filled with giant grabs and some of the most beautifully animated flying insects you’re ever likely to find. If you travel under water, you’ll swim next to giant mutated eels, each inhabiting a cage displaying some feminine name, as if they were vicious pets of some sick and twisted mind. The second level features a zombie attack – much like the mummies from the second game, you can get turned into a zombie if they vomit on you, which means you can unleash a wave of destruction by spewing waves of bloody vomit all over the screen. You fight yetis for some reason and save a slew of frozen POWs. Some of the captured fellows you save here are actually Morden soldiers, but they’re so grateful for being saved that they’ll reward you and run away like regular POWs. In this same stage, you get a weapon called the Thunder Cloud, a storm cloud which follows you around and zaps everything in your path. In the same stage, you can rescue an ape, who wears a diaper and wreaks hell with a pair of Uzis. The boss is an orb that zaps you with electricity and drops monoliths on top of you. 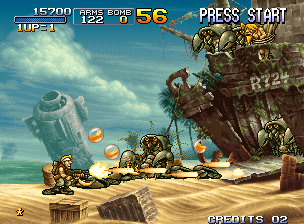 There are only five levels here compared to the six of the previous two games, but each is also much larger than before. Almost all of the stages have branches that take you to completely different parts of the level, and some even have branches within the branches. At the first stage, you can choose the upper route to fight above a river, or take a lower one to dive through the ocean. Though the level bosses are always the same, it allows for a huge amount of diversity for multiple playthroughs. However, some areas are definitely longer or more difficult than others (there’s no real advantage to visit the ice stage in area 2 other than prolonging the experience because it doesn’t skip over any area.) The subterranean hideout, filled with sword-swinging, suicide bombing warriors in stereotypical Japanese garb, is way harder than the other route in the level.

There are tons of new Slugs, including Elephant and Ostrich Slugs (guns strapped onto these animals), a mecha called the LV Armor, and the Slug Driller, which can increase its height to avoid enemy fire. There are also more vehicle segments where you can pilot subs underwater (shades of In The Hunt, an Irem arcade game from the same development team), fly through the sky in the Slug Copter and Slug Flyer, and rocket into space with the Astro Slug. 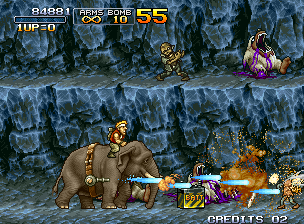 Yes, you get to rocket into space. After the European warfare of the first game and the world traveling mayhem of the second, Metal Slug 3 goes big with the final level, expanding greatly on the alien encounter from the end of the previous game putting you on an epic journey to take down the alien mothership. This final stage is one of the most massive triumphs of the human spirit and is almost as long as all of the prior stages put to together, which features a shoot-em-up sequence as your heroes blast into the skies, and a huge fight against clones of your captured comrades, before fighting with the hideous mother alien in a spectacular death defying mid-air battle. 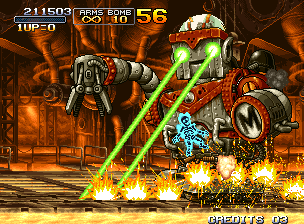 For as monumental as this last stage is, it’s also arguably the game’s biggest issue – it goes on for way too long. This single stage can take up to half an hour to complete, which, when tacked onto the previous levels, making a whole playthrough take about an hour, which is a little long for these type of games.

The other major criticism is the difficulty. Metal Slug 3 is substantially more difficult than the previous games, with bosses that have huge amounts of HP and ridiculous attack patterns. The robot boss at the end of the third stage, Jupiter King, has such a quick laser attack that it’s almost impossible to dodge unless you’re already moving away from. The flying sun god and boss of the fourth stage, Sol Dae Rokker, has dense bullet patterns that are incredibly difficult to dodge. Much of these issues are mitigated by the lower difficulty levels, which greatly reduces their HP so their faster attack patterns won’t show up, but on the default level, it’s almost comically difficult. 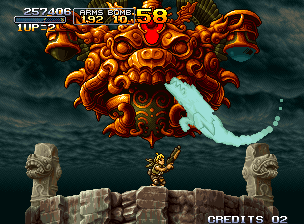 Metal Slug 3 is richest entry in the series, both in its amount of content and the amount of care puts into even the smallest details. It really just jams almost everything from the earlier titles together, and then adds even more goodness on top of it. Alas, subsequent games never quite reached its height for a variety of reasons – this is the last one developed by SNK before running into bankruptcy and handing the reigns to different teams. Plus the later games obviously didn’t have the budget (or care) put into this title, and it was clear that there was just so much stuff packed in here that it’s hard to really expand on it. 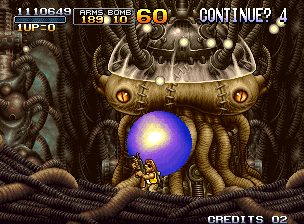 As a result of its beloved status, Metal Slug 3 is also the most widely ported game in the series. It was released on the PlayStation 2 in Japan and Europe, and featured unlimited continues from where you died. It was scheduled for American release but was blocked by the awesome chaps at SCEA for being too old looking. Thankfully, Microsoft allowed SNK to publish this on the Xbox. While you get unlimited continues in both of these ports, losing all of your lives in the Xbox version sends you way back to the beginning of the stage, forcing you to master all of the levels before you can proceed. In theory, this isn’t a bad idea, especially considering how many gamers/reviewers complained that the PS1 Metal Slug X was too easy since you could continue indefinitely and without penalty. However, this system doesn’t take into account that the final level is completely huge, and incredibly difficult – even if you die at the last boss, you need to start the whole twenty minute ordeal from scratch. It’s rough, and only a few die-hard souls have ever made it to the end. 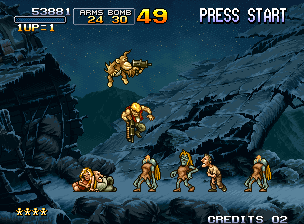 Both of these ports feature two extra mini-scenarios once you complete it. “Storming the UFO Mothership” sets the stage in the final level puts you in control of one of three enemy soldiers – a “Normal” guy, a “Bazooka” guy, and a “Shield” guy. As you plow forward, a whole army of Morden’s soldiers will tag along and start killing enemies along with you. You can also call Sgt. Allen O’Neill to help clear the screen. “Fat Island” is a two player game where each compete to eat as much food as possible. 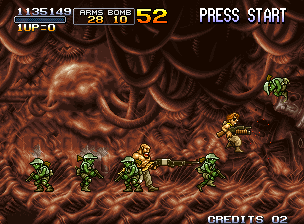 The Xbox 360 port on the Xbox Live Arcade is a straight port of the arcade game, featuring online play and some smudgy “upgraded” HD visuals. It lacks the extras of the Xbox port but at least allows unlimited continues from where you died. The later PlayStation 3/4/Vita ports by Code Mystics are basically arcade perfect, offering various display options and unlimited continues, though with some sketchy online play. The Windows version by DotEmu is just a standard emulation, though its emulator is of lower quality than MAME.