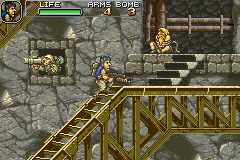 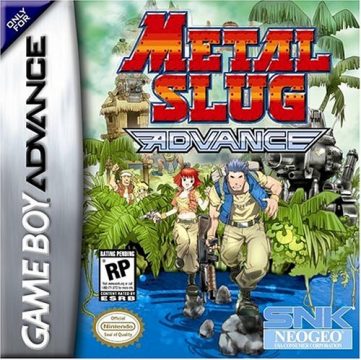 On the surface, Metal Slug Advance seems to emulate its arcade brethren perfectly – the graphics look spectacular, it plays almost exactly the same, and the sound is practically identical. But once you play, it begins to feel a bit off. The animation has been cut back severely, to the point where it’s worse than the PlayStation ports. Enemies only have one dying animation and don’t bleed at all, not even white sweat. The levels are about as pedestrian as a Metal Slug can possibly get, and all of the graphics and bosses, save the two new characters, have simply been imported from other games in the series. The whole package almost makes Metal Slug 4 look good. 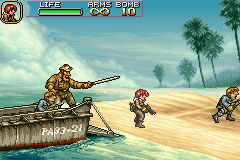 Unlike the NGPC games, there are only five missions, and most of them are strictly linear. In order to add some depth, there are tons of cards to be found, either hidden in out of the way areas or found by rescuing hostages. Some of these are merely for collection purposes, but many provide power-ups, such as upgraded weapons. The problem is, in order to actually keep a card, you need to beat the stage without dying, which is insanely obnoxious. Much like the other portable games, you get a life meter, and only one life. Continue points are generous, but the difficulty isn’t exactly balanced in any way that makes sense. Since getting hit won’t replenish your grenade supply, boss battles often drag on, made worse by the general lack of weapon power-ups. The small screen makes for lots of cheap hits, especially with the respawning enemies. In the end, it feels immensely sloppy. Back before the Metal Slug Anthology for the PSP, this was a decent deal to get near-authentic Metal Slug on the go, but it really is just a mere patchwork that’s not really worth it anymore.