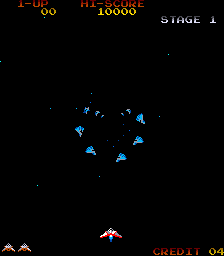 Gyruss, one of Konami’s more popular games in the early 80s, is a “tube shooter” similar to Atari’s Tempest, although it also borrows heavily from Namco’s Galaga. The viewpoint rests behind the player’s ship, which travels along a circle on the playing field. Enemies pop out in waves and fly towards the end of the tunnel, floating until they strike back at the player. Naturally, your job is to kill them all before moving on to the next stage.

It’s an impressive bit of technology for 1983, since it uses sprite graphics rather than vectors like Tempest. It’s also notable for its fast paced arrangement of Bach’s Toccata and Fugue in D minor. 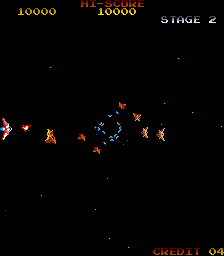 But unfortunately, Gyruss is stunted by some poor control issues. Tempest eschewed the traditional joystick in favor of a control knob, which made sense given the circular movement. Gyruss didn’t do this and the result is rather confusing, since the directions are relative to your position on the screen. When holding the joystick in any direction, your ship will get stuck at the 12 o’clock, 3 o’clock, 6 o’clock or 9 o’clock positions, requiring that you change direction on the stick. You can switch over quadrants smoothly with practice, but it’s still far from ideal.

Ports for Gyruss appeared on for the Atari 2600, Atari 5200, Atari 8-bit, ColecoVision, Commodore 64, NES, Game Boy Advance and Xbox 360. The Atari 2600 isn’t too bad despite its choppiness, and manages to fit in a simplistic version of the theme song. The Atari 5200/8-bit version is a bit improved from this one, with more defined graphics, smoother action and better sound. The ColecoVision version is roughly on par with the Atari 8-bit versions, but the best is the Commodore 64, which has smooth gameplay and excellent music. 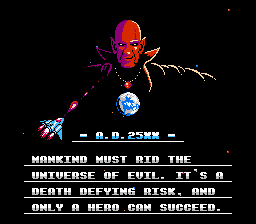 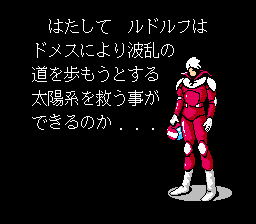 The Nintendo version, released for the Famicom Disk System in 1987, and in cartridge format for the NES in 1988, is greatly refined, and plays more like a sequel than a port. Changes include improved graphics, better music (which sounds a bit different between the NES cartridge and Famicom Disk versions, due to the wavetable synth hardware in the latter), extra songs, a powerful super blaster weapon that has limited charges, new enemies, several extra stages (you travel through all of the solar system, including Pluto and the Sun, as opposed to simply starting from Neptune), an intro and ending sequence (which is more expanded in the Famicom version), “chance” stages after each planet that allows for bonuses, mini-bosses in certain stages (which are usually just orbs that hover at the end of the tunnel), and larger bosses at the end of each planet. The bosses add much more variety, but they occasionally prove to be a bit of a pain due to the lack of depth perception. 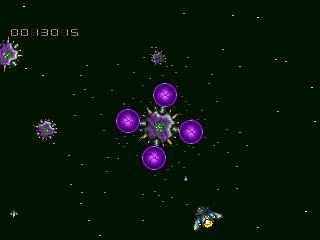 Gyruss is also a hidden mini-game in the PS1/Saturn game Contra: Legacy of War. On the surface, it actually looks and plays alright – it’s based somewhat on the NES version, complete with its improved controls, super blaster weapons, and bosses. It’s a bit condensed, seeing how there’s a boss after every stage instead of every three stages. For some reason, though, even the smallest enemies take several hits to kill. It’s easier once you get the twin blasters, but it still almost ruins the game, especially if you get hit too many times and your weapon is downgraded. 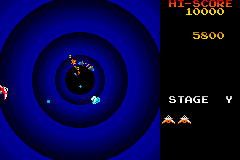 The Konami Collectors Series: Arcade Advanced for the GBA has a port of Gyruss which scales down the action to fit the small screen, and fits the status bar on the side. If you input the Konami Code, you play a retrofitted version that includes three new levels at the beginning – Zone X, Y, and Z. These take place in a warp and are actually quite difficult, but once you beat them and get to the “real” game, you get to keep the twin blasters indefinitely. The Xbox 360 version features an option for updated graphics, which only look okay, but also has a new remix of the theme song, which is pretty decent. 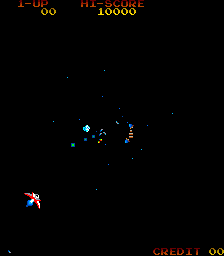 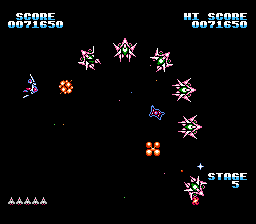 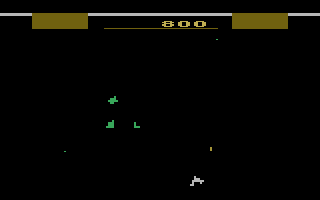 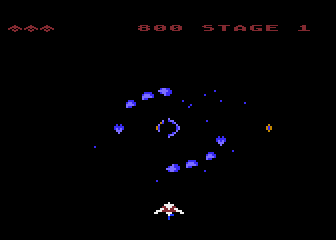 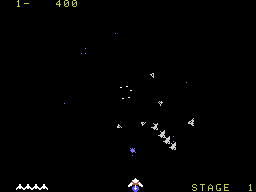 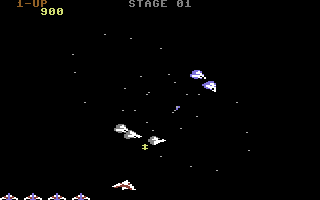 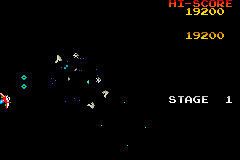 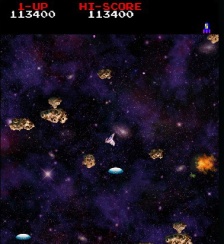 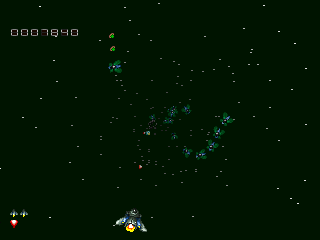