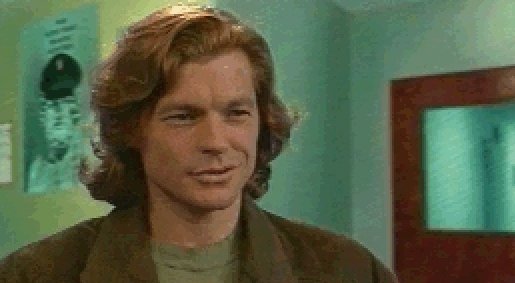 The Beast Within: A Gabriel Knight Mystery - IBM PC, Windows (1995) 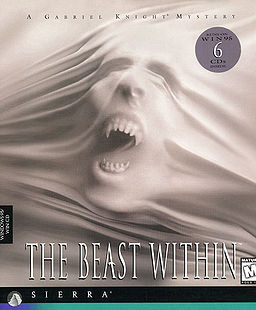 The Beast Within: A Gabriel Knight Mystery picks up roughly a year after the end of the first game. Gabriel has moved to his family castle in Germany, and is living off his first successful book: The Voodoo Murders, starring one “Blake Backlash,” who is very transparently Gabriel himself. His family reputation as demon hunters is soon revealed, and the local townspeople beg him to investigate a series of mutilations. They appear to have been caused by animals, so naturally the blame is placed on a pack of wolves that escaped from the local zoo. Further investigations, however, reveal the entanglement of a local hunting club, a secret animal smuggling ring and, most intriguingly, werewolf lore. 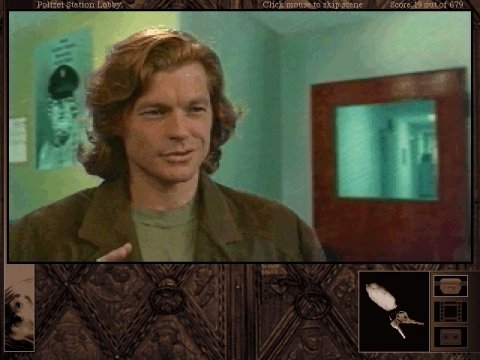 Meanwhile, Grace decides that she’s wasting her time back in America and flies off to Germany, only to find that Gabriel has left his castle for Munich. Frustrated, she sets off on her own research, slowly uncovering the mystery of Ludwig II, the “last true king of Bavaria,” as the locals call him. Ludwig II was a bit of an eccentric, often dismissing state matters in favor of living a lavish fantasy life, and constructing castle after gorgeous castle. The government tried to declare him insane and remove him from power, but shortly thereafter, Ludwig was found mysteriously drowned in a nearby lake. Whether it was murder or suicide, nobody quite knows, but it’s a long standing national mystery in Germany. Grace is determined to prove that werewolves were somehow involved with Ludwig II, and ends up discovering a long lost opera composed by Richard Wagner, a longtime friend of Ludwig.

The hero, once again. Played by Dean Erickson.

Grace takes a much more active role in the sequel, although she doesn’t interact with Gabriel until the end of the game. Played by Joanne Takahashi.

A wealthy baron who runs the hunting club. He sees much promise in Gabriel and they share many of the same interests – wine and woman, in particular. His role sort of mirrors that of Malia Gedde in the first game and while their relationship is not overtly romantic in nature, there are some vague homoerotic undertones. Played by Peter J. Lucas.

A prominent member of the hunting club that begins to resent Von Glower’s attention to Gabriel. Played by Richard Raynesford.

Gabriel got a lot of help from the local police department back in New Orleans, but the German police department, led by Kommisar Leber, isn’t quite as cooperative. Nevertheless, their goals are more or less the same as Gabriel’s – to catch the culprit behind the wolf killings. Played by Nicholas Worth. 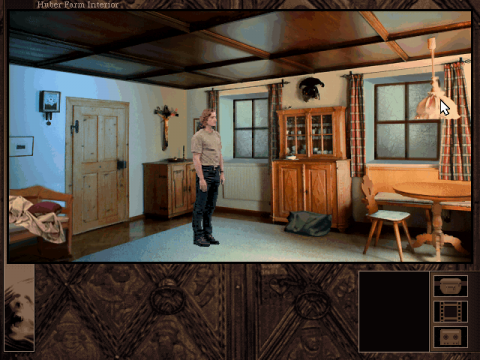 The first chapter begins with the player controlling Gabriel, then the view alternates between Grace and him for the next few chapters, until their stories and paths meet in the sixth chapter at the end. The game is spread over six CDs, generally one chapter per CD, but there is some disc switching for certain scenes. Apparently the original design documentation called for eight chapters, with at least one of them putting the player in control of Ludwig II, as he tries to hide the opera scrolls, but unfortunately that was cut out in the planning stages due to budgetary constraints.

The Beast Within runs on the same engine as Phantasmagoria and uses many of the same techniques. Every interaction is shown with full motion video, which accounts for the number of discs. By default, the video is interlaced and looks rather ugly, but a fan made patch can disable it. (The screenshots in this article were all taken with the interlacing disabled.) There are still some compression artifacts, but in general the video quality is actually pretty good. The less said about the CGI werewolves, though, the better. 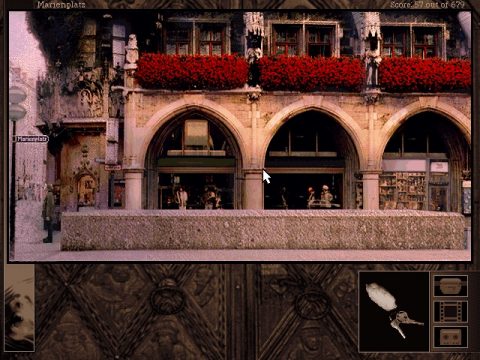 In most of the scenes, you don’t directly control Gabriel or Grace, although they’re present on the screen. Instead, you simply click on an area to investigate it or walk to a different screen. The backgrounds are all high resolution photographs, which look fantastically gorgeous – it may as well be a promotional device for the German tourist industry, because like the New Orleans feel of the first game, The Beast Within completely nails the modern German atmosphere. However, in spite of its visual splendor, it still feels like there’s a strange disconnect between the characters and the scenery. There isn’t nearly as much to interact with or comment on as in the first game, leaving each screen feeling hauntingly beautiful yet depressingly empty.

Of course, the deciding factor of any full motion video game is the acting, and this is where The Beast Within hits some shaky ground. Dean Erickson certainly looks the part of Gabriel, and while he’s significantly less boorish, he’s also a bit duller. Joan Takahashi plays Grace, and while she’s too cold and unlikable in the early chapters, acting openly hostile to Gabriel’s live-in maid, she eventually warms up as the story progresses. They both do a decent job, but their personalities just aren’t as lively as they were in the original. Still, in an era where most FMV games barely surpassed high school drama level, The Beast Within is a shining beacon. 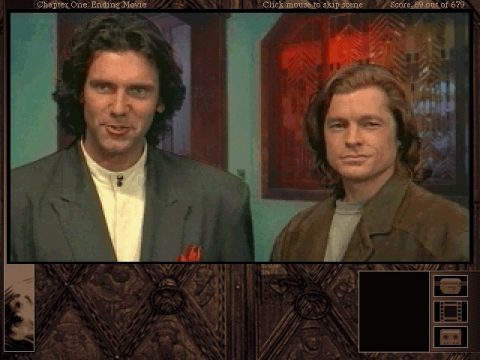 More problematic is the issue of direction and pacing, because some scenes just go on way too long. There’s a reason why exposition scenes in TV and movie are brief – it’s because watching talking heads discuss various issues for five minutes straight just isn’t all that engaging, especially when there’s no music. When using live action, you need somekind of dramatic tension, especially when there’s so much video, and it just isn’t here.

Like the first game, you spend a lot of time interrogating various people. There aren’t quite as many topics to dig into, because that would simply require far too much video, but that’s ultimately for the better. When you’re just reading text and listening to voice acting, you can click through the dialogue to speed things up. You can’t do that with video – you either watch the whole scene or skip it entirely. (Thankfully, this is one of the boons of the game – there’s an FMV scene with almost every action, but they can be easily bypassed with a single click.) There are no subtitles either, although another fan made patch has added them, at least in the Windows version. All conversations are recorded for later playback, so you can review them if you’ve lost track of something. 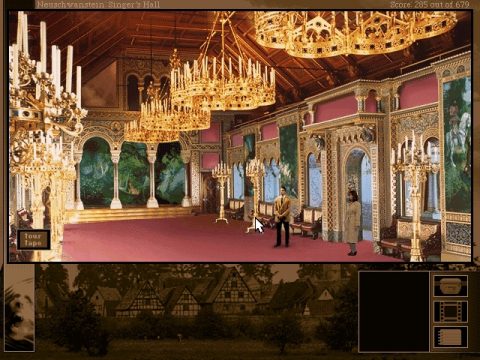 Even more annoying is that large parts of the game are simply hunt n’ click fests. There’s one whole chapter where you play as Grace, simply walking around museums and looking at things. That’s fine, but the area layouts are quite confusing, making it extremely easy to miss one of the many, many triggers. If you miss even one, you can’t proceed, which is liable to drive anyone nuts, You’re then forced to comb and re-comb the same areas over and over, trying to find the one semi-visible part you missed, and then interrogating the same people over and over in hopes that new conversation topics have popped up. There’s a vague hint system which lets you know which locations still have tasks to be accomplished before you can move on to the next chapter, but it’s still easy to feel frustrated and aimless.

While some of the puzzles can be pretty difficult throughout, the most annoying ones are right in the first chapter. Early on, Gabriel needs to impersonate someone by splicing together bits of a previously recorded conversation. Of course, there are numerous lines of dialogue to comb through, so the hint function is really the only way to get the precise wording that the game demands. This one at least makes sense – near the end, you need to infiltrate a sporting club by distracting the maitre d’ by buying a cuckoo clock and hiding it behind a plant. 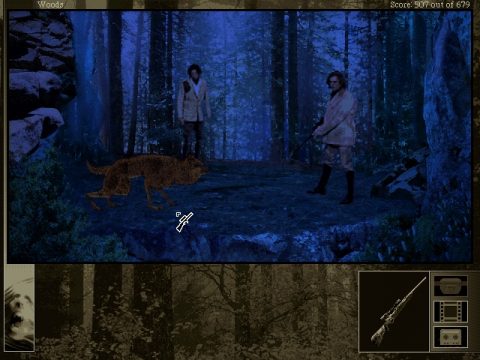 The final chapters are far more dramatic, and include a wolf hunt through a darkened forest – which, despite its tension, is little more than a “choose the right path or die” sequence – and a rather bizarre real-time puzzle/strategy segment where you morph into a werewolf and need to hunt down your opponent in an enclosed space. It’s actually pretty cool, as the whole segment takes place from the first person perspective, complete with off-colored visuals.

Robert Holmes returns to supply the score, along with some additional helpers. Many of the themes will sound familiar to fans of the first game, but they’ve been arranged for orchestral quality, and all sound fantastic. The highlight is the “lost” Wagnerian opera, which is certainly an accomplishment. Despite its high quality, a huge majority of the game is played in silence, with only sound effects and character voices. Indeed, the most impressive is the opera scene, which tries to mimic Wagner’s style. It’s only one act of it, so it’s obviously pretty short compared to a real opera, but it’s impressive to see the lengths that Sierra went to make this feel authentic. 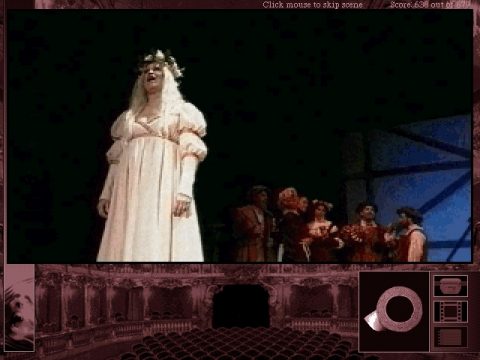 In spite of its pacing issues and apparent hollowness in the scenery, The Beast Within still manages to be engaging. Jensen once again is clearly enamored with the subject material – German castles and the conspiracies surrounding them, long lost operas, werewolves – and does a fantastic job in sharing them with the player. Even though it can be slow going, the mystery itself is well written enough to be engaging, as long as you have the patience for it.