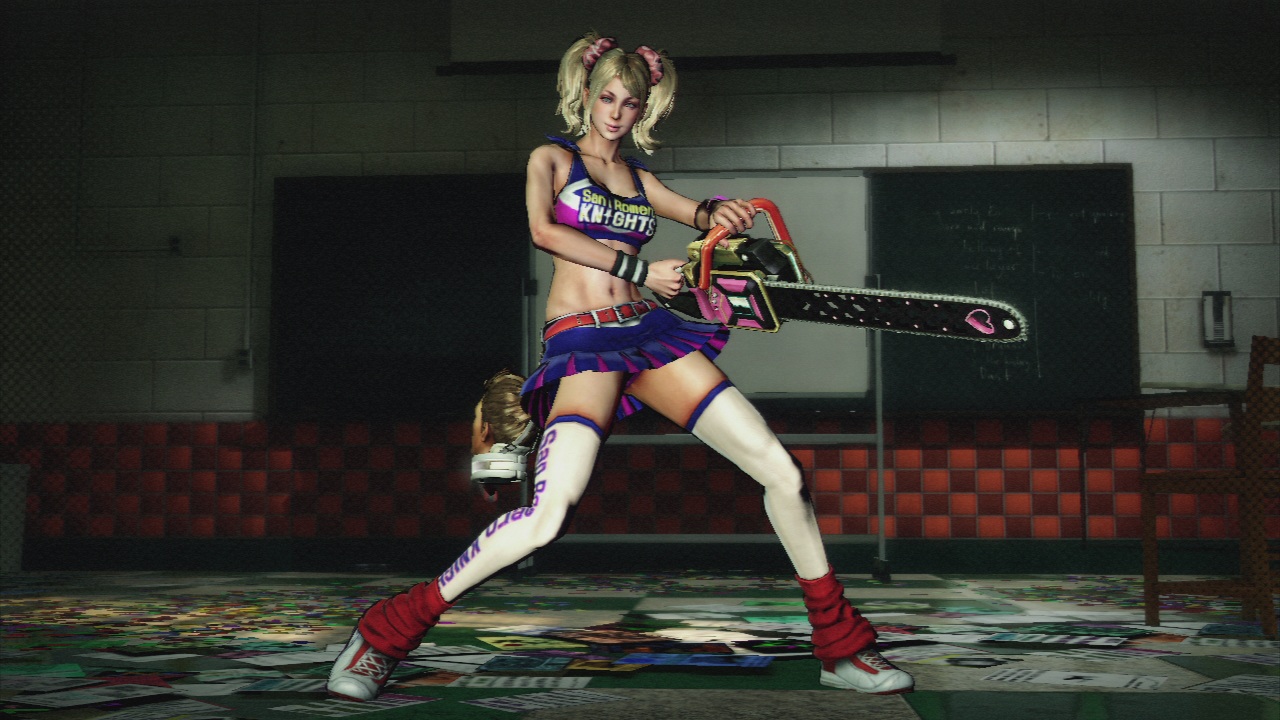 This could be explained by looking no further than the title’s writer; Hollywood director James Gunn, at the time being known for his work at Troma, and the films Slither and Super, well before his more well-known work on Marvel’s Guardians of the Galaxy movies. Unlike SotD however, LC would be directed by a Japanese designer from the company, this time being Tomo Ikeda, who previously worked on Rule of Rose and Little King Story as a designer. Akira Yamaoka would return as composer, but this time would be joined by Jimmy Urine, the lead singer of the band Mindless Self Indulgence (also doing voice work for the game), as well as a large selection of licensed music from the likes of Toni Basil, Dragonforce, and even including the song “Pac-Man Fever” by Buckner & Garcia. Yamaoka would share music real-estate with the licensed tunes in the menus and stages proper, while Jimmy Urine would compose each of the game’s boss fights. 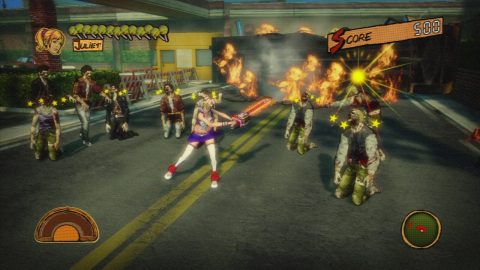 If it wasn’t obvious from the name itself, Lollipop Chainsaw is schlock, and it revels in it in all forms. The story begins on our lead character, Juliet Starling’s 18th birthday on her way to San Romero High School for class, however there are zombies everywhere, especially in her school. Thankfully, she has her trusty chainsaw! She finally reaches her boyfriend Nick, but he’s bit, which in haste leads her to perform a ritual to keep him alive after removing his head, from his infected body, Nick becomes your partner in crime and literal talking head, very much like Johnson in SotD.

After the two of them make their way through the school, they find the cause of all of this chaos, a bullied student named Swan reciting incantations to bring the recently deceased back to life, including a small handful of incredibly strong, clique themed students known as the Dark Purveyors. Zed, the obscene Punk Rocker; Vikke, the Viking; Mariska, the hippie; Josey, a man of Funk; and Lewis Legend, the Heavy Metal, rather “ELEPHANT ROCK” guitarist. Juliet and Nick go through farms, an entertainment center, and eventually an under construction chapel to find and defeat these Dark Purveyors, meeting up with members of her family, known zombie hunters, along the way. After each of the Dark Purveyors are taken out, they recite a Latin chant, very much like what Swan did previously. Juliet and Nick question, but ultimately push off the chants, until it’s revealed after Lewis’ defeat that it was Swan’s plan all along for the Purveyors to be taken out to bring the return of Killabilly, the King of zombies, even more appropriate given his resemblance to Elvis. 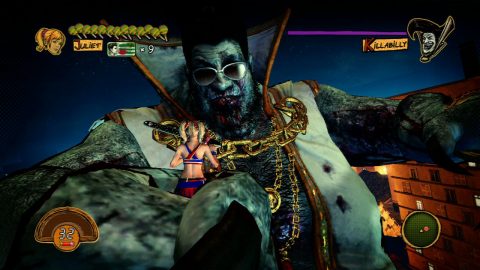 On the gameplay spectrum, Lollipop Chainsaw is in the style of a “character action” game, a genre that Grasshopper was quite familiar with at this time with the likes of No More Heroes. Strong attacks, weak attacks, dodge buttons, and shops to buy not only upgrades for your character, but also new attacks and combos are all present. Like other games in the genre, you are also scored and graded depending on your performance, however style, nor combo are the big ways to get the high score, but sparkle points. You kill zombies by decapitating them, but just killing one after the other gives diminishing results. Instead, you’re incentivized to decapitate as many as you can at once, which also gives out the game’s form of currency, Gold and Platinum coins, both of which count towards your final score. Juliet’s family give her birthday gifts throughout the story, which get added to her chainsaw as new abilities, like a gun attachment, or an engine to enable a dash.

As a whole, Lollipop Chainsaw is a very simple, easy to get a hold of action game. Even with the variety of moves you can purchase, combos are never complex, with most only adding on another heavy attack to a combo. Combos for the most part exist only to give Juliet a larger radius for potential decapitation, getting straight to the point of getting more Coins and Sparkle. The hordes of undead you find throughout the levels do come in a number of forms to keep from getting too bland, with standard, slim bodies, slower, fat bodies, rockers, cops with guns, even branching out to ones that fly. Named zombies occasionally show up, but are simply just more powerful versions of zombies already killed, using the same animations and models. Much like No More Heroes before it though, Lollipop Chainsaw‘s real excitement comes from the boss fights; alphabetical letter and swear words as obstacles, hallucination induced tractors and clones, wars of attrition with a mechanical elephant, and even a giant Elvis hungry for cheerleader. If the lack of variety in the regular fights during the levels is a little boring, the boss fights make up for that in spades. 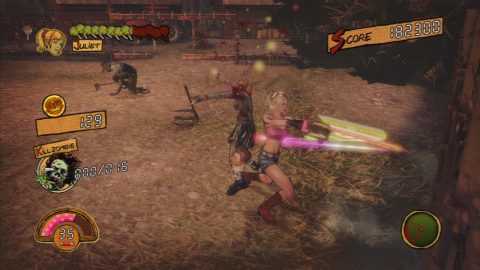 With five stages (including the short tutorial level and figurative hallway that leads to the final boss), the game ends up feeling very short, though the stages themselves take a half an hour or more to complete. As a result, it has a very arcade-like feel. Even more so, because the game wants you to replay the short story multiple times, especially on harder difficulties, which have exclusive Lollipops to collect (for no reason but to collect), and additional named zombies that are more of the same as lower difficulties. On top of upgrades, you can also purchase art, music, and what most people will get right away, different outfits. Save up your Platinum coins and you can dress up Juliet in seashell bikinis, casual wear, putting on a helmet, a mascot bunny, or even “Not” Ash Williams. Thanks to connections with Kadokawa the game also has a number of crossover outfits from anime such as Deadman Wonderland, Highschool of the Dead, Manyuu Hiken-chou, and Is This a Zombie? for Juliet to dress up with. Unfortunately, the game had an issue that plagued many other games published by WB at the time, store exclusive, preorder DLC. This came in the form of a handful of costumes, including the previously mentioned Ash Williams outfit. If you’re in the west, there was no way other than preordering from a certain retailer to obtain these outfits, which essentially makes every western copy of the game incomplete. Fortunately, in Japan, the game had the special edition “Valentine Edition” released on Valentine’s Day in 2013 which would include a perfect unlock code, granting access to every outfit.

Grasshopper’s partnerships with Western publishers had both their lowest lows as a developer as well as their highest highs. Shadows of the Damned despite good reception failed to fly off shelves like EA would have wanted, with Shinji Mikami saying the best part of development was Grasshopper learning how to use Unreal Engine. Meanwhile, Lollipop Chainsaw would be their highest selling release, making the studio into a household name. Where EA’s attempts to stifle Grasshopper’s vision led to a unsuccessful game rife with development issues, WB and Kadokawa’s hands off approach led to a much smoother development and their best selling title. 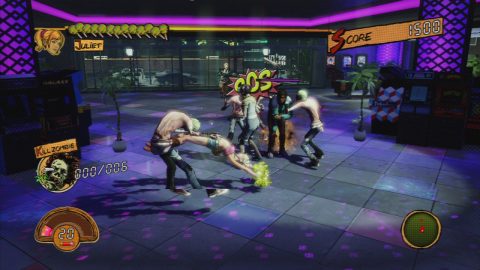 To many players, or even the outside audience who would see this title, the very sexual nature of Juliet comes off as a cheap, easy ploy to sell the game. However, this is only true on a skin deep level. To the average bystander, Juliet is a ditsy, scantily clad, generic blonde, the game subverts those thoughts throughout the story for those willing to put up with the first impression. Coming naturally from her family’s business, she’s a talented and experienced hunter of the undead, on top of that, she shows skill in black magic when she revives Nick as his disembodied form, surprising him that she would even know such things.

Juliet, despite being a sexual character, is not objectified to the same extent as Nick, though to different ends. A head, being tossed around like a toy, placed on bodies, being shot and swung around as a weapon, even being dehumanized by Juliet’s family members, with “it” and “thing” tossed around, avoiding his name, only seeing him as the talking head. In a way, Nick, who comes off as a straight man throughout the game can be seen a stand-in for the player. He, like someone who would start the game for the first time coming for just the T&A (in his case, dating her because she’s the head of the cheerleading team), would be taken for a surprise to find Juliet being deeper than first thought. His responses to events during the game more often seen more realistic and grounded compared to Juliet’s, who seems to see many of the odd occurrences lightheartedly, as if it’s just another day. Their random little bits of dialogue are some of the shining moments in the game. 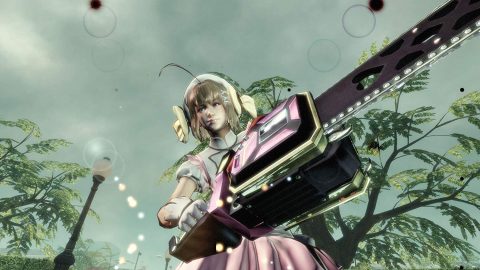 Like previously mentioned, Lollipop Chainsaw received a large amount of promotion and advertisement, moreso than any Grasshopper title before. One notable example was a promotion that IGN held, where cosplayers would audition to be the official Juliet Starling cosplayer and spokesperson at events, with the winner being Jessica Nigri. While attending PAX East in 2012 to promote Lollipop Chainsaw, Nigri was asked to change her outfit (the pink skintight outfit in the game) due to complaints, she would change into Juliet’s default outfit, but that too was considered too revealing and was asked to leave. On a more personal to the game itself level, trailers were also made to showcase both Akira Yamaoka and Jimmy Urine’s music as well as the game’s voice actors.

The Japanese version offers both English and Japanese language dubbing. Juliet’s English voice is played by Tara Strong, while the Japanese version has two actresses depending on the version. For the Xbox 360 version, the default actress is Eri Kitamura, while for the PlayStation 3 version, it’s Yoko Hikasa. The Japanese version also has two violence modes: “Zakuzaku” (“slice and dice”), which is just as gory as the international version, and “Kirakira” (“sparkling”), which replaces all of the blood with glitter and other bits of cutesiness. 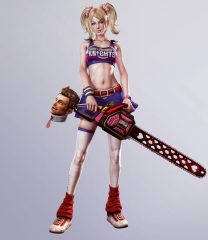 Head of the cheerleading squad, has a hot, jock boyfriend, and is a zombie slayer extraordinaire. This girl has it all. 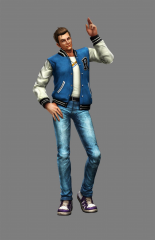 Juliet’s Boyfriend. Unwilling sidekick on the adventure. A decapitated head. 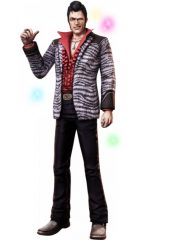 Juliet’s dad, real name Gideon. A veteran hunter, shown to be quick on his feet and is used as Juliet and Nick’s form of transportation to the arcade. 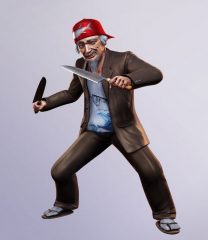 Juliet’s teacher, teaching her everything she knows in the art of slaying the undead. A bit too perverted for his own good. 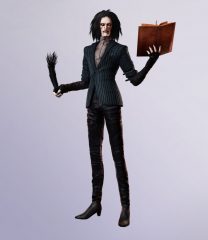 Swan
An outcast, the stereotypical goth. Brings the Dark Purveyors back to life to do his bidding. 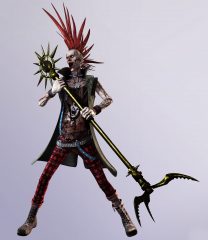 Punk Rocker, has an incredibly dirty mouth and is crude as a whole. Gets off on being cut up by Juliet. 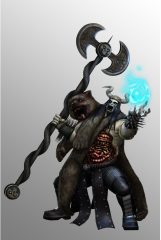 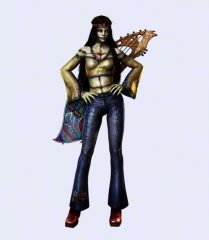 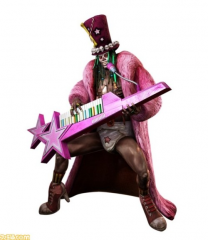 Funk Rocker, hangs out in the town’s arcade, loves classic games, and ends up subjecting Juliet to plenty. 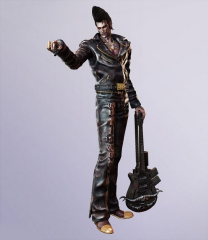 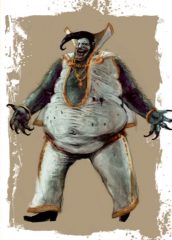 The King of Zombies! Oddly infantile.

Shadows of the Damned