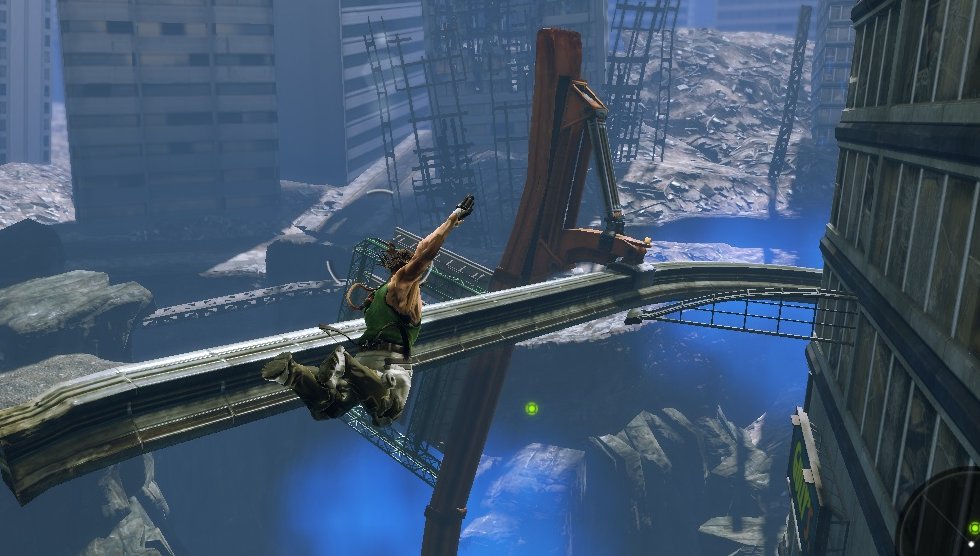 One year after the spectacular Bionic Commando Rearmed, the long-anticipated build-up to an actual all-new game in the series finally came to fruition. Rearmed was awesome enough to stand on its own and not merely feel like a gigantic plug for the upcoming game, but it’s obvious that the game’s plot was designated to set the backstory for what was due to come. Grin has done a fine job of bringing a new dimension to the adventures of “Rad” Spencer.

First off, the setting is likely to turn off devoted fans right away due to the “darker and edgier” tone given to the plot and the protagonist. Soon after the destruction of the Albatross, Nathan “Rad” Spencer and Joseph “Super Joe” Gibson were hailed as heroes, and bionics became high in demand for military use. However, over the years, public opinion of bionic appendages began to turn, and the populace decided they had too much power, beginning the “Great Bionic Purge”. Pro-bionic extremists, former bionic soldiers, and even remnants of the defunct Imperials founded the terrorist group BioReign and declared war against the Federal States of America. During this time, Spencer had been imprisoned for failing to follow military orders, but he is busted out of jail by his old friend Joe to take down the terrorists. 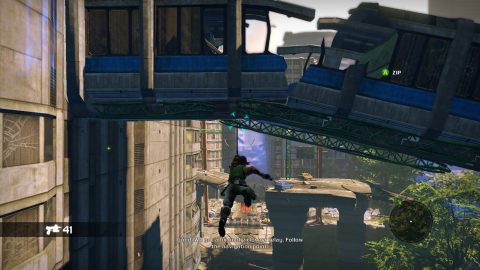 There’s an incredible amount of backstory for what amounts to what appears to be a standard action plot. It’s undeniably darker and edgier than the straightforward story of the original NES game. Furthermore, the graphic style is sure to test the loyalty of longtime fans, primarily due to the redesign of Spencer. Ten years have changed the freedom fighter from a vaguely Duke Nukem-esque patriot to a gruff dreadlocked ex-convict. The change is jarring, though he fits the game’s darker atmosphere. For those who prefer the old look, there’s a secret code that gives him his classic character model.

The scenery is fantastic. Ascension City looks the part of a New York-style skyscraper graveyard with crumbled buildings, scorched earth, broken highways, and corporate billboards to boot. You see all sorts of ads for Pepsi, Nvidia, and other logos for various wares, which is a bit annoying and cheapens the game’s validity. The background music is just about what you would expect for a game of this scale; a fine mix of orchestral and electronic sounds that comes off as dramatic and adds a lot to the overall atmosphere. When it comes time to kick ass, the volume inflates and the tempo flares up to match the action. If you keep an ear out, you will even hear several remixes of old Bionic Commando music that are done beautifully. 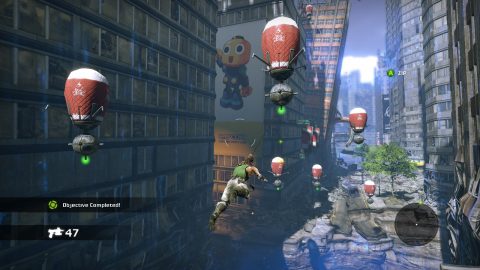 The voice work also deserves some recognition. Mike Patton, the eclectic vocalist of Faith No More, Mr. Bungle, and Fantomas provides the incredibly angry voice of Spencer. He deliberately makes Spencer into a cocky, sarcastic, rage-filled son of a bitch who goes over the top with yelling at the enemies he kills.

Veteran voice actor Steve Blum is Super Joe. Even if he pretty much uses the same voice for 98% of all his characters, it fits the gruff, middle-aged Joe. The most insane voice among the main cast is that of returning villain Gottfried Groeder (Scott MacDonald), who hams up his role to high hell every time he pipes in with his wacky “totally not an ex-Nazi” tone. 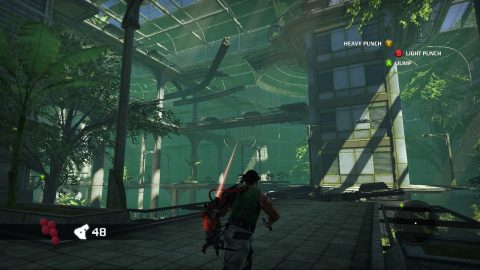 The aesthetics hold up well enough, but the bread-and-butter of the game centers on the bionic arm. All control of the arm is handled by the L-trigger/L2, where the simplest application is to point your aiming cursor at the nearest surface and hold onto the button to fire your arm. While swinging forward, two blue lines appear to indicate the optimal time to swing for maximum distance. You simply let go of the swing button, and either land or hold the swing button again in midair to latch onto your next target. No precise button press is required to attach to the next object. Swinging from point A to point B is relatively easy, not to mention damn fun.

If you do screw up a swing, you will not be penalized if you find solid ground beneath you. There are a scant few voids that will engulf you, but these are fleeting concerns compared to the blue clouds of radiation that float around everywhere. When the biohazard sign pops up on the screen, your prerogative is to turn tail and flee before the screen becomes crimson. You don’t die immediately if you swing into a blue cloud, but sometimes, death can’t be helped if you swing too far into bad air. The radiation clouds are a means for restricting free roam around each level, killing the curious spirit of the avid adventurer. The game was deliberately intended to be linear, and radiation was what they decided to place to guide the player. Still, one can’t help but think there could’ve been a more natural solution fixed through better level design. 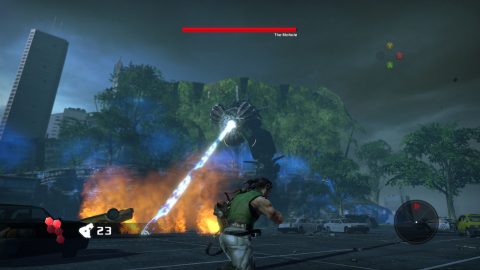 Aside from these hazards, you will also have to deal with BioReign troops everywhere you swing. There’s no health bar to indicate your amount of punishment, only an increasing red tint, complete with a danger beep if you get close to death. Retreating to a safe place will regenerate your health, so always have an escape plan if things get hairy, which is bound to happen against Biomechs and Polycraft, two robotic foes that can deal (and absorb) quite a bit of damage.

The best part about the game is all of the different methods you’re granted to impose havoc upon enemy forces, via your appendage. You don’t have all of your abilities right away, but you recall them at key points in the game. To start, you can attach the arm to an enemy and perform a zip kick, where you catapult yourself towards the target, feet first. Then there’s the “death from above,” where Spencer smashes the ground with a powerful shockwave. 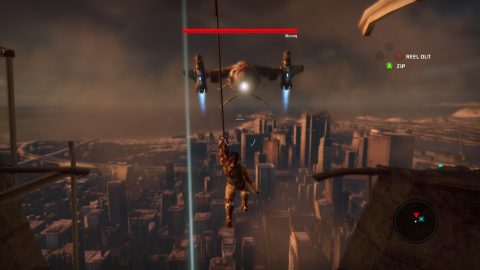 The “rip” is where you pull off walls and drag down heavy objects, sometimes onto a group of enemies. You can “punch up” either heavy objects or enemies with a metal uppercut and spike them down into groups of baddies like a volleyball. The coolest ability is to “throw” objects arm-first, acting somewhat like the “punch up” but at longer distances. Finally, you gain an adrenaline meter that allows you to pull off a devastating wire spin attack to blow off soldiers around you, enhance your “death from above,” or instantly obliterate most of the tougher foes.

Spencer’s default weapon is the Tungsten, a pistol that’s weak, but fires quickly. Then there are the obligatory grenades, which have spikes for no good reason other than to look cool. The special weapons include the Hiker, a gigantic shotgun that obliterates anything up close, the Yelena, a sniper rifle which generally isn’t too useful but helpful for those pesky snipers, the Bulldog, a grenade launcher which is good for any range except for point blank, the Tarantula, a homing rocket launcher which is very helpful for mechanical enemies, and even good ol’ Super Joe’s Machine Gun, more powerful than it’s ever been before. In spite of the cool sounding weapons, the gun combat is not all that impressive. Enemies take a lot of hits before dying, and you usually need to use your arm skills to weaken them, or else you might find yourself unloading an entire mag on a single enemy. This game is all about using the arm, and that’s very clear. 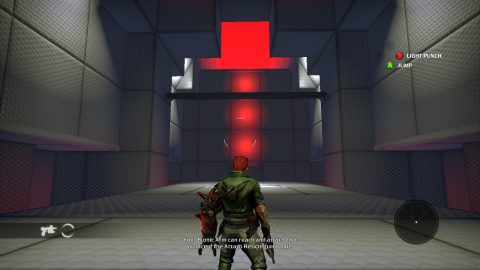 This blandness in weaponry carries over to the rest of the game. By the end of the first act, you’ve fought pretty much every basic enemy type there is, aside from some variations later on. It doesn’t help that the same scenery is repeated over and over – destroyed city, underground cavern, an industrial area, another underground cavern, and so forth.

One of the biggest gripes is the lack of boss fights; there are only three legitimate bosses, not including the final confrontation. What’s there is fantastic, like the battle against a giant helicopter amidst a halfway constructed building. There’s some spectacular gymnastics you can pull off here – dangle off a girder, quickly lock on, fire away, let go, and whirl around to grab onto another platform before you fall. The second battle is against a robotic worm called the Mohole, wherein you need to lob cars and other bits of debris right at its mouth. 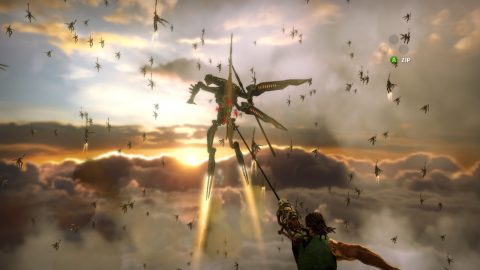 There are a few technical issues too, primarily the long load times. The checkpoints are reasonably placed, but every death requires an approximately 20 second reload. Of the console versions, the PS3 release performs slightly better, with a more consistent framerate and minimal screen tearing, while the PC version runs the smoothest, and mostly negates the loading time annoyance. Certain versions also have the advertising billboards patched out.

For those who grow weary of the single-player campaign, there is also some multiplayer on hand. There are three modes, allowing up to eight players, and covering the usual standards of Deathmatch, Team Deathmatch, and Capture the Flag.

The last beef is with the plot, which is reallyc well, it’s outright stupid. Partway through the game, you learn that Joe is actually the terrorist leader. The “you’ve been working for the bad guy all along” cliché is slightly annoying, but the fact that Joe is now evil, without even an insane explanation, is just depressing. It’s easy to feel betrayed, especially since the name “Super Joe” has been around since the golden age of Capcom arcade games.

Then there’s the shockingly awful final twist, that Spencer’s missing wife is actually…his bionic arm! This bad plot could have been mostly redeemed if a sequel would be released, explaining why Joe went maverick, and the deal with the mysterious white-clad sniper that pops up near the end. He’s named as “Thomas Clarke” in the credits, the name of player three from Mercs. Let’s also not forget that Joe’s full name, Joseph Gibson, was his billing as player one from the same game, so it seems like the writers were trying to tie all of Capcom’s classic arcade games together.

Sadly, Grin was shut down shortly after this project, partially due to the game’s poor sales, alongside the failures of their movie tie-ins Wanted: Weapons of Fate and Terminator: Salvation. More than anything, it yearns for a sequel which could improve on the first with better gun combat, more enemy variety and boss fights, and less stringent level design, all covered in a plot that could answer the questions left behind by this game’s Gainax ending.