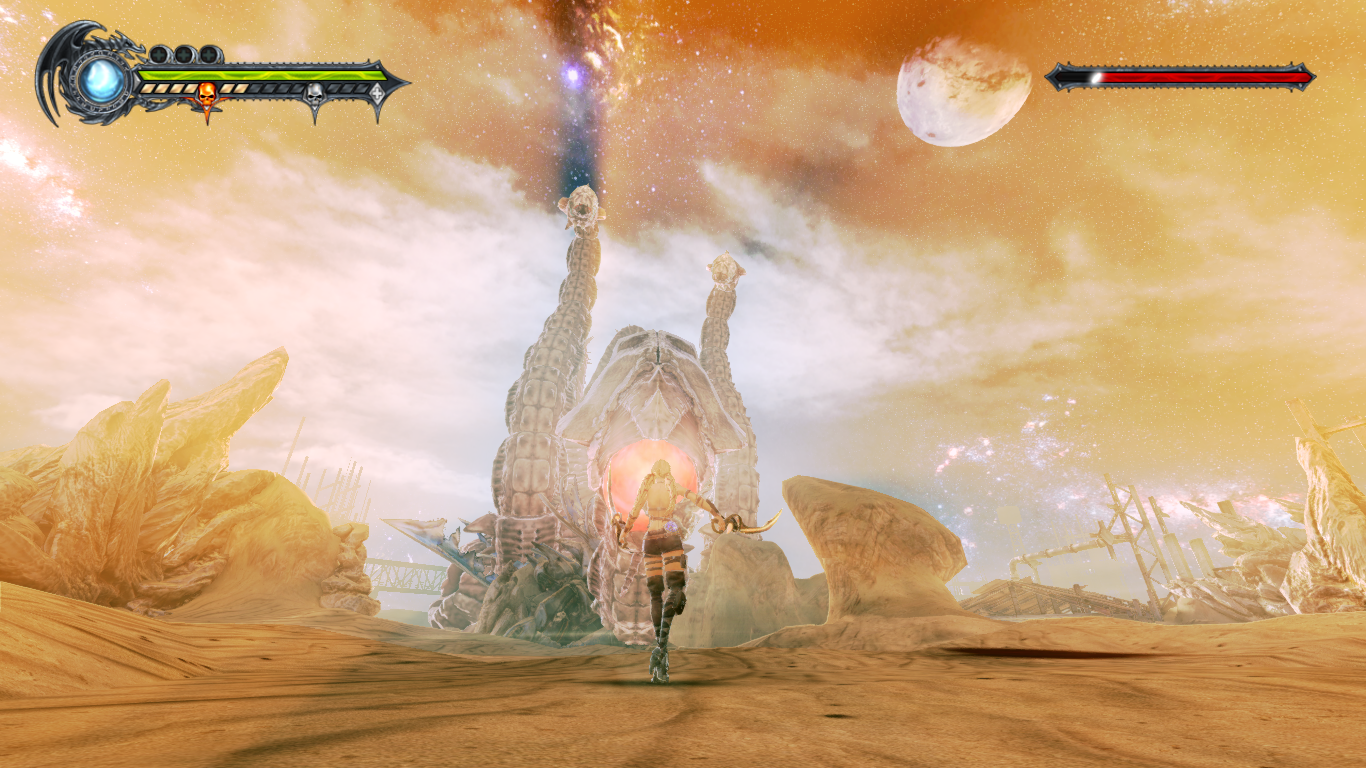 Blades of Time is a rarity for B-games. This was an honest attempt by Gaijin to show how much they had grown since X-Blades, paying homage to that game with another action-adventure, treasure hunting romp, filled with slashes, shots, magic, and monster killing. Just taking a glance at the cover, though, shows that a lot had changed for them since 2007. Ayumi was back, but now with a realistic art style and, *gasp* HOT PANTS! This was a different age, where the team was still most certainly horny, but now in a more socially accepted yet boring way. Also, she was white and British now, and her personality was replaced with cocky idiot for mildly surprised board of wood. On a style level, Blades of Time was a huge step back, with even the music drained of personality, but it was a massive step above X-Blades in every way you could imagine. But, it was still a B-game, and that still brought problems.

The story this go is way more expansive, starting with Ayumi and her muscular slab of beef given a human soul named Zero assaulting the treasure hunting guild in order to go to Dragonland and hunt for treasure (cause duh). Ayumi is separated from Zero and soon finds Dragonland to be a weird place, filled with monsters and zombies, caused by the conflict between the gods of order and chaos. With the help of some sort of dragon spirit, Ayumi is set to escape and find the treasure of the magic island, running into some other treasure hunters trying to escape, a creepy talking alter who gives her magic in exchange for souls, and magical tech mechs who really don’t want her continuing on. 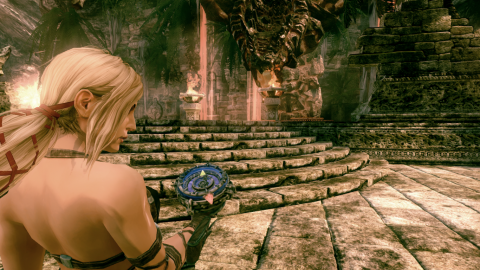 Blades of Time has a surprisingly strong story and dub, certainly better than the stringed light and dark cliches of the last game, plus with actors who don’t sound like they’ve never heard a human talk before. Even when it falls into video game nonsense, like having you go against the wishes of some humans to continue on and end up having to kill them, characters in the narrative react in kind. It even serves as foreshadowing for the late game reveal, which is not something you’d expect from a game where the main character dresses in the slutty variant of the Lara Croft halloween outfit. You even get multiple characters with defined personalities and ways of speech. It’s not a storytelling mastery by any means, but it’s a good motivator to continue through the game, with multiple cutscenes in every one of the ten sizable levels. It does make up for Ayumi no longer having an actual personality, though I will always miss the tanned dumbass rogue.

One thing you’ll notice quick is that the game looks good. The character models basically recycle the same two human models over and over and have stiff body language, but the environments are filled with color and details. The desert level alone is genuinely one of the coolest looking places I’ve ever seen in a video game, though the rest meshes more into a generic sci-fi/fantasy look that’s not as memorable. There’s also been a change of priority in sound design, as music actually does make proper atmosphere now, making you briefly think this is a proper major release instead of a B-game. The biggest flaw is the style change makes the game look too much like other games on the market, and Ayumi just comes off as a Lara Croft knock-off instead of the spunky butt-kicker she was originally. 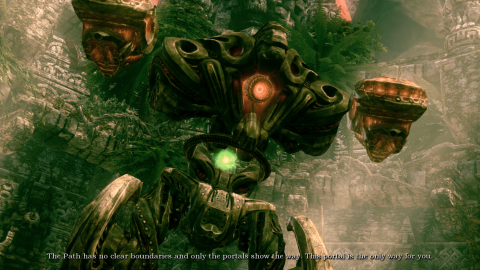 Ayumi controls in a much more satisfying way (though she has sadly lost her dorky Naruto run). She has plenty of weight in her jumps, and her second jump comes out easily. It goes farther than you’d expect, but the levels have been designed with this in mind. She also has a new dash move that’s very useful for combat, plus a slide she can use with saved rage that doesn’t go as far, but will knock away enemies and damage them. She now has a secondary kick attack that acts as a launcher, but her air game is still weak. No matter if you kick or sword, you get a short combo that ends with you slamming back to Earth, no additional options. It’s nice to have an actual combo system now, but more could have been done with it.

The rage meter has been tweaked and has two skulls on it. When you reach one, you can use a spell of the given tier, and the rage meter even saves the point if you empty or fill and reset the gauge. Filling is recommended, as this gives you a health, which stocks to three. Rather than going to the menu to buy health if you get low, Ayumi can heal with these stocks, the trade off being that she can take far less damage here. This means you’re encouraged to play aggressively, and it makes you consider when it’s best to use spells, as you’ll empty your meter if you use one before you fill out for the health point. There’s even a fun finishing move system in place now, where you can take out enemies faster with a button press upon getting a prompt, and that same button can be used for a similar counter move during hectic fights. 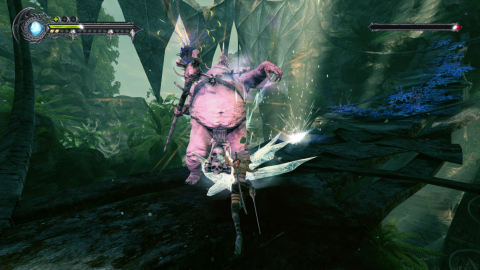 Gunplay is its own separate thing now, as you quickly gain a rifle and can switch to it whenever you wish, changing the camera to an Resident Evil 4 style behind the back view. You can then line up shots, but your view is more limited and you’ll leave the stance once you jump if you need to dodge something. It’s an interesting idea, but actually finding use for the gun now is limited, the game more segmenting it into gameplay chunks with different gimmicks and focuses. This makes the gun usually a poor pick for a fight unless a segment is clearly designed for it in mind.

The new time rewind ability is an interesting twist on a concept you’ve seen before, but it doesn’t exactly work as well as intended. The idea is that you can hold a button to activate it and start a rewind, letting go to set things back in motion. However, you stay in place, and an after image of you rewinds instead. This means you can litter the field in other yous re-doing motions you already did. It’s a good idea for puzzles, or at least would be if the timing weren’t so hard to get down for puzzles that require you to really push your rewind time to the limit. In combat, it’s an absolute mess only good for a small handful of encounters, and is otherwise just a slower way to fight. 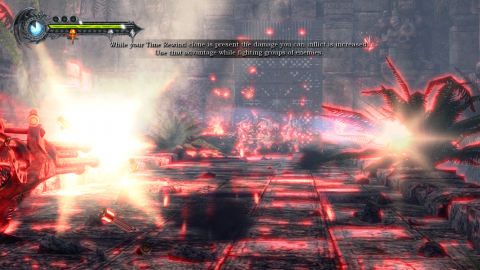 Boss fights vary. The first one, against a giant guard robot, is confusing because it’s clear you have to destroy his turrets, until you remember you barely have any air combat options, your first jump doesn’t have much forward momentum, and the camera makes it difficult to focus on a particular segment. If you’re playing with a keyboard, it will be especially frustrating because lock-on is a hold and will take a finger away from either a directional button or an attack button. They get better from there, and each has a new wildly different gimmick. The second requires you to air dash around flowers, for example.

The thing is that while X-Blades was a clunky mess you learned to work with, Blades of Time is orderly and polished, yet certain parts don’t seem to fit like they should. The end result is incredible frustration at a few points. Trying to do a puzzle while invisible enemies spawn at set points and keep running from you when you cast a zone spell to make them visible is not fun. Trying to melee fight in the human base gets you killed by gunners, but gun mode makes it harder to see the mines scattered around the floor. Having to do a rewind puzzle is almost always obnoxious, because even you know how to solve it, actually executing the solution is needlessly complicated, making you time how long multiple clones will stay in one spot and creating a ton of trial and error. 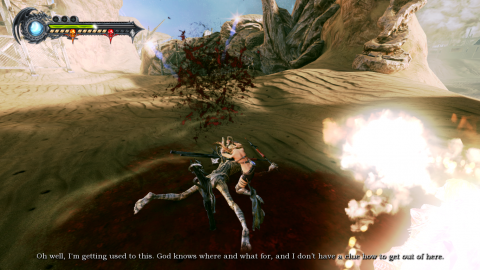 When it works, it works very well and creates some fun set-pieces, but those few moments where systems converge for a new sort of challenge rarely work, especially when those bloody mines are involved. Dying in Blades of Time doesn’t feel like your fault that often, it feels like a failure of the design instead.

Still, it’s a fun experience overall, you just may want to have a walkthrough handy if you come across a frustrating bit. The game also has a DLC campaign taking place towards the end of the story, following a supporting character fighting it out in a formerly off-screen battle. Blades of Time stands on its own, for the most part, but where the B-game qualities saved its predecessor from complete misery, they hold back what would otherwise be a pretty wonderful game here.