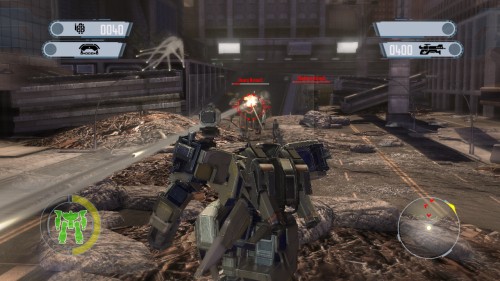 Officially unveiled in 2009 and released in 2010, Front Mission Evolved is a third-person shooter spin-off released for the PlayStation 3, Xbox 360, and Windows PCs. This was the first entry that was developed via an East-to-West collaboration. Art direction was handled by Imaginary Friends Studios in Singapore. The music was scored by Garry Schyman of Bioshock fame. Game design and development was handled by Double Helix in USA. Square Enix’s role in Front Mission Evolved involved story elements, but in a rather surprising move, this was handed over to Motomu Toriyama of Final Fantasy XIII fame. No one from PDD6 other than Shinji Hashimoto, the producer, was involved in its development. Set away from the original storyline in 2171, Front Mission Evolved is a story reboot. The story revolves around the destruction of a USN orbital elevator, which leads to a new war between the OCU and the USN. The main protagonist is a USN engineer named Dylan Ramsey, who gets caught up in the ensuing chaos. 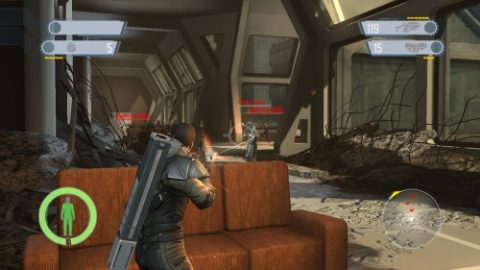 Front Mission Evolved‘s visuals have a very arcade-like feel, through the use of bright, uncomplicated color palletes. This extends to the wanzer and character designs, which are less gritty and more cartoony than other Front Missiontitles. It’s great if you’re yearning for a throwback to the arcade days, but not so much from a technical standpoint. For a mid-generation PlayStation 3 and Xbox 360 title, it looks very outdated and looks like it belongs on the PlayStation 2. On the other hand, Garry Schyman’s musical score is a nice fit for Front Mission Evolved‘s atmosphere. The sound effects are also good, but the Transformers-like sounds that play when wanzers move feels very out of place in Front Mission. Likewise, the voice acting isn’t very good and feels very stiff in execution. 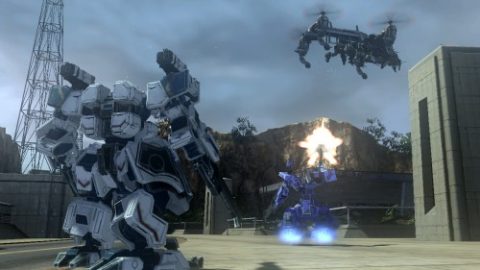 Front Mission Evolved takes inspiration from Front Mission: Gun Hazard and Front Mission Online for its single-player and multiplayer modes respectively. In the single-player campaign, the player switches between three modes of play: wanzer, infantry, and gunship. Wanzer and infantry modes play identically the same, with minor differences. For example, there are no customization elements in infantry mode. Gunship mode is a new addition to the Front Mission fold; playing out like a rail shooter, players control a large gunship and must clear the battlefield of enemies. The constant change between the three modes is nice and keeps the game from getting stale. The problem is, all of them aren’t developed enough to differentiate the game from a typical third-person shooter. The level design stays largely the same, and there’s very little need to experiment with different setups to beat the campaign. 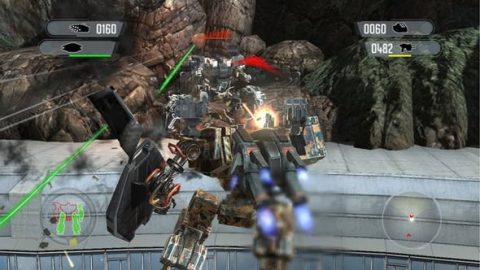 Front Mission Evolved‘s multiplayer mode also suffers from the same problems. While there is a robust, Call of Duty-style progression system to encourage players to invest more time in it, the multi-player mode doesn’t have lasting power. With only four (five through downloadable content) standalone game modes, a 4-on-4 maximum player cap, and a randomized matchmaking system that prevents players from creating their own teams, Front Mission Evolvedquickly becomes a tedious chore to play online. Additionally, the game balancing for online play is missing. As better parts are rewarded for continuous play, new players are at a disadvantage against those who have already invested time into multi-player. 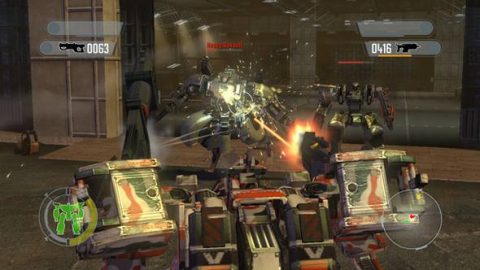 It’s a shame that Front Mission Evolved turned out the way it did because the game had signs of greatness in it. Double Helix mentioned in interviews that many features were cut out of the game; these include online co-op play for the story campaign, the ability to freely board and disembark from wanzers, more environmental interactivity, and a more involved multi-player mode. Furthermore, a significant portion of the story was removed for the final product. While the story removal is a debatable issue due to Motomu Toriyama’s poor writing skills (all other Front Mission stories have been penned by talented writers with film and TV credentials), the game design removals aren’t. What could have been a great re-imagining of Front Mission: Gun Hazard turned out to be another generic third-person shooter with mecha elements. 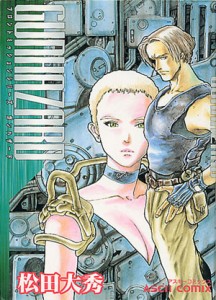 Like most successful video game series, Front Mission also has its own line of merchandise. Front Mission has spawned action figures, art books, data books, game controllers, films, novels, mangas, mouse pads, posters, radio dramas, soundtracks, and even vinyl records. The films, novels, mangas, and radio dramas are noteworthy as they have helped Front Mission achieve success in other media, effectively creating a second “home” away from the games. Planned in 1994 and authored by the series’ writers, these expanded universe supplements explore the civilian perspective, showing a more personal, character-driven side of the story. In fact, because they contain new story content and better bridge the gaps between the games, these expanded universe materials are key to understanding the series in its entirety.

Since virtually all of the Front Mission merchandise was only available in Japan, importing through an online retailer or otherwise is the only way to get them for those outside of that country. And unfortunately, a lot of the merchandise is very rare nowadays. 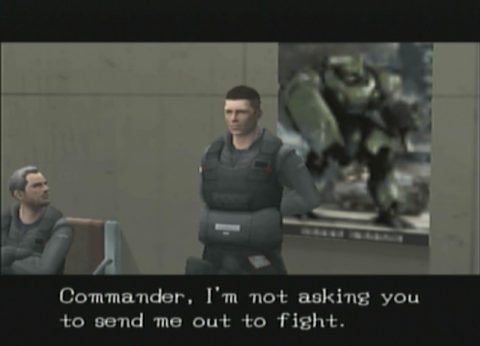 In December 2007, a group of loyal long-time fans of the series banded together and created the Front Mission 5 Fan Translation Project. Originally, the group’s goal was to create an unofficial English localization for the game. However, around the time of the project’s completion and release in December 2009, the group changed their name to Front Mission Series: The Fan Translation Project. At the time, the group revealed that unofficial English localizations had begun for Front Mission 2 and Alternative. In addition, the group has announced that they are working on other projects, such as a series plot guide titled “The Classified Documents” and articles about the series’ design and lore.

Ultimately, the group’s new goal is to educate people outside of Japan about the series, from what makes it unique to any future products like Front Mission Evolved. Given how fragmented the fan base is outside of Japan, it’s a pleasant surprise that some people are taking a stand in trying to unite these fans. With old Square Inc. and Square Enix failing to properly handle the series overseas, these brave and indomitable fans seem determined to finish the job the company failed to do for years. For more information about this group, check their website at frontmission.info.

Front Mission is a true diamond in the rough. It’s a series that takes pride in its diverse visual/aural presentation, solid play mechanics, and exceptional storytelling. It boasts an unprecedented level of depth, intricacy, and realism very rarely seen in video games today. Although the series certainly won’t appeal to everyone, those who approach it with an open mind will find a lot to enjoy. It’s real shame that the series has largely stayed in Japan, and people outside of the country can only experience the tip of the iceberg.

What makes it even more remarkable is how the series was extremely well planned. Unknown to virtually everyone outside of Japan, Toshiro Tsuchida planned the entire series from the storytelling aspect in 1994. With his writing team, Tsuchida mapped out the major stories and the main storyline of the series; the video games and their expanded universe supplements were the end result of this. When the intended final game in the series, Front Mission 5: Scars of the War, was released in the end of 2005, a huge sigh of relief from the PDD6 team could be felt in their old development blog (which is now unfortunately out of service). Many developers, especially from the original Front Mission team, made one very big post with their thoughts on the long journey, about how big the series became, and thanked all the fans who supported them.

At the time of this writing, Front Mission has celebrated its 17-year anniversary. Front Mission Evolved was released, and fared poorly in sales. Toshiro Tsuchida left Square Enix as of February 28, 2011 and with his departure, it seems likely that Front Mission will come to an end. This doesn’t mean that the series is incomplete – it has outlived its original goal by six years, possibly more as its other media entities still show signs of life. Front Mission has made its mark in the industry one of the earliest video game series to pioneer cross-media storytelling, and do so with great success. Even though it’s been forgotten in the West, in Japan the series is seen as a beloved heirloom and a benchmark for future video game entities wishing to dabble into the art of cross-media storytelling.