Most video game publishers kept friendly relationships with each other, rarely referencing or parodying other games or characters other than their own. There was, however, a running joke of various video games taking characters from competing games, and putting their names on gravestones, as a way to subtly dig at them. 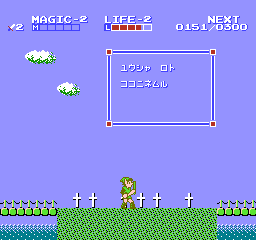 It all started with the Japanese version of Zelda II. One of the gravestones in Saria reads “The hero Loto rests here”. Loto is the legendary hero of the Dragon Quest series, called Erdick in the North American NES release but changed back to Loto for the Game Boy Color release. At the time, the English version of this game, Dragon Warrior, had not yet been released, so you simply cannot read the tombstone in the English version.

This continued in the first Final Fantasy game, in a series of graves in the town of Elfheim. In the Japanese version, one of the graves reads “Here lies Link”, referencing back to The Legend of Zelda. When localized for the NES version, this was changed to “Here lies Erdrick”, referencing back to the Dragon Warrior/Quest hero. Nintendo published both Dragon Warrior and Final Fantasy in North America, so it was technically keeping it within the RPG family, and maybe they didn’t want to besmirch the name of their star character. For the subsequent English re-releases, this was changed back to “Here lies Link”. 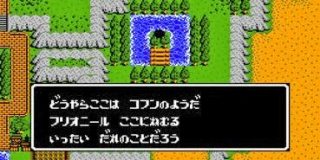 Far more obscure is the Famicom fighting-RPG Tenkaichi Bushi Keru Naguuru, published by Namco. This game has lots of parodies, including a default name selection that includes references to other Namco games, like Xevious, Dig Dug, and Druaga. But, of course, there’s also a graveyard in this game. One of the graves reads “Here lies Frionel” (with the text remarking “I wonder who the heck that is?”) This is, of course, the hero of Final Fantasy II for the Famicom, called Firion in the English versions.
This joke continued with the PC Engine CD RPG Tengai Makyou II: Manjimaru. In the town of Kobe, there are gravestones with names in kanji that seem made-up, except they’re “ateji”, meaning they’re used to represent sounds rather than the actual meaning of the symbol. When read this way, they’re actually references to other video game heroes. “麻里魚” is Mario, “呂戸” is Loto, and “亜土留” is Adol (from Falcom’s Ys series). Apparently someone high up on the corporate food chain either didn’t like this or got mad, because this was changed or removed from every subsequent re-release of the game.
Finally, in the Japanese version of Star Ocean: Till the End of Time for the PlayStation 2, there’s a graveyard in the town of Arias that reads “The hero Loto rests here”. The English translator probably didn’t get the reference so it was localized directly as “The hero Roto rests here”.