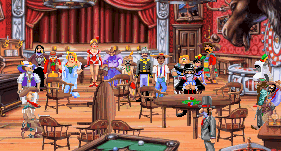 Going through the list of Sierra adventure games is like walking down the genre fiction aisle of your local bookstore. King’s Quest is Fantasy, Space Quest is Sci-Fi, Laura Bow is Mystery and Police Quest is True Crime. Fittingly enough, Freddy Pharkas: Frontier Pharmacist is their stab at the Western genre, although unlike most of its fellows, it never progressed beyond a single entry. Designed by Josh Mandel and Al Lowe, it’s a sillier game that fits in with their previous work on Space Quest and Leisure Suit Larry, so it’s much more Blazing Saddles than The Magnificent Seven. 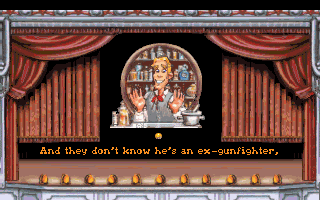 Freddy Pharkas used to be a lawman, one of the best shots in the West, until an unfortunate scrape with a villain (who, in Sierra fashion, looks more than a bit like company president Ken Williams) leaves him with a wounded ear and a crippled sense of pride. Vowing to give up his violent ways, Freddy enrolls in school, then moves out to the town of Coarsegold and begins his new life as a pharmacist. No one here knows his past, least of all Penelope Prim, the dashingly proper schoolmarm and object of Freddy’s affections.

The game covers four acts in total. The first just involves Freddy filling prescriptions for the various townsfolk, while the second has Freddy running some detective works to cure the horse population’s extraordinary flatulence problem, stop a herd of stampeding snails, and resolve the town’s diarrhea epidemic. About halfway through, Freddy learns of a conspiracy to scare the folk out of town, so he digs out his old uniform and polishes off his pistols to rid the land of the scheming varmints. 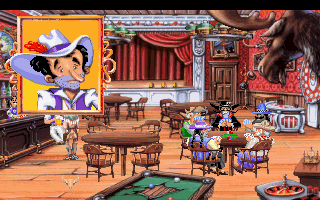 It’s a pretty short game, all in all. The entirety of the events takes place in Coarsegold, which, including interiors, comprises about twenty screens total. Most of the puzzles in the early sections involve filling prescriptions, which requires digging out the included booklet dubbed “The Modern Day Book of Health and Hygiene”. It’s a hilarious little book, as the 50 page pamphlet details a number of maladies, each with preposterous cures that parodies the knowledge (or lack thereof) of 19th century medicine. (A good one – “Pregnancy: A temporary, usually non-fatal condition involving a parasitic embryo, a host female, and a disinterested third party (usually a father)… Fortunately, we now know that pregnancy is entirely preventable simply by staying home on Friday and Saturday nights.”) Like the tabloids that came bundled with the Space Quest games, some of the funniest material is found herein… except you’ll be digging it out constantly to deal with all of the tedious pharmacological work. To quote one of the walkthroughs on GameFAQs: 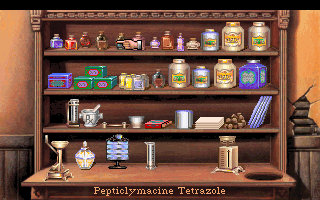 What a bummer, this all is. It really drags down the comedic momentum when you have to do what amounts to chemistry homework for a few minutes. There are no less than five occasions where you need to do this, where a single one really would’ve sufficed. These aren’t particularly hard either, so much as just annoying. The rest of the puzzles aren’t really that difficult either, although there’s the usual issue of difficult-to-see hotspots. Most of the game is refreshingly free of insta-deaths, although they pop up here and there. There’s an invisible timer for a couple of the events in Act II, so you have to act quickly unless you want to die from horse gas. There are also a handful of timed sequences and (literally) shooting galleries in the final chapter, when Coarsegold is overrun by outlaws. But generally, most of the deaths are caused by your own stupidity, like taking your customer’s medications or eating animal plop. Upon meeting your demise, the storyteller, Whittlin’ Willy, will lament whatever damn fool thing you did to get yourself killed. 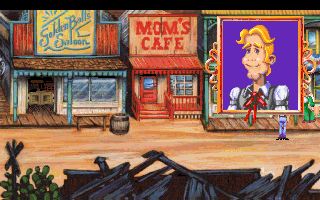 It’s really all about the comedy, though. The box cover for the CD-ROM version beckons you to “Meet the Great-Great-Grandpappy of Leisure Suit Larry”, due to Al Lowe’s involvement, but in reality, it’s not nearly as ribald as those games. (It’s not a complete lie though – Larry’s forefather makes a small cameo late in the tale.) It’s still juvenile, sure, what with the colorful fart sounds and all, but it mostly treads safely in PG-13 territory, with the most offensive elements being the ladies of the ‘Orehouse and a handful of innuendos. 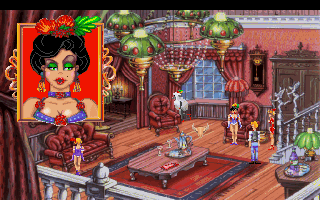 The rest of the humor comes from the spoofs of Western genre clichés, along with a generous helping of random goofiness. The denizens of Coarsegold are a colorful bunch, with a few possessing terribly punny or silly names, like the cafe proprietor Helen Back and her Chinese cook Hop Singh. Freddy employs real Indians (er, Native Americans) instead of the traditional cigar store Indians statues in front of his shop, who are all too mindful of the crimes perpetrated by the White Man. Freddy is also joined by Srini, an actual Indian, from, you know, India. It’s winkingly stereotypical, playing with well known tropes of days past. The ending credits have a number of faux outtakes, with the character’s “actors” flubbing lines and generally acting like spoiled Hollywood stars, long before this practice was popularized by Pixar. The sliders on the Options screen consist of fellows on hangmen’s nooses. There is also a recurring (and curious) fetishization of sheep, just for good measure. 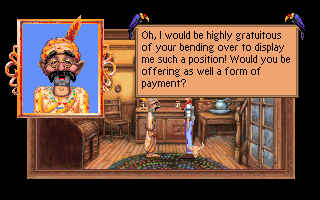 The upside of having such a small game world is that the designers were able to fill the game with all kinds of jokes just for screwing around with everything in sight. Try picking up everything and anything, or prodding the random folk that mosey through town. It’s fun! Beyond the Ken Williams and Leisure Suit Larry cameos, there are at least a few nods to the King’s Quest series, what with a bridge that threatens to collapse every time you cross it (which may bring back horrible memories of King’s Quest II) and the presence of Cedric the Owl, the intensely annoying avian sidekick from King’s Quest V. The vultures on the screen eye him deliciously, as some folks at Sierra recognized that pretty much everyone hated that little thing. One of the best gags is right in the beginning, when taking the key out of your pocket and unlocking the door to the pharmacy, which will immediately award you 500 (out of 999) points, remarking that you’ve already gotten halfway through the game. It’s a nice little wink-wink-nudge-nudge at the somewhat arbitrary scoring system that Sierra games continued to possess, a holdover from old text adventures that most of its competitors had dropped. 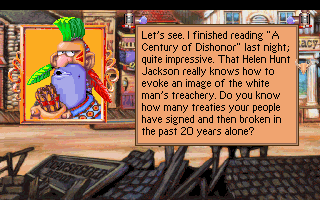 The background graphics are typical Sierra, hand drawn and scanned in 256-colors. The characters are more developed and stylized than the usual fare, lending to the cartoonish atmosphere. The CD-ROM version has some fantastic voice acting, with famed voice artist Cam Clarke filling in the role of Freddy. It also features fully vocalized versions of the two themes – “The Ballad of Freddy Pharkas”, and “The Ballad of the End of the Game of Freddy Pharkas” – both of which are typically folksy and quite catchy to boot. The only downside is that a few gags were removed from the CD-ROM version, since voiceovers weren’t recorded for them. The disk version gives a number of weird jokes if you try inappropriately combining inventory items, but in the CD version, you just get a red X and a sound effect. Typical of most Sierra CD games, you can’t enable voice and text at the same time either, a mildly annoying constraint.

There are two demos released by Sierra. The CD demo has speech and contains the section where you have to save Srini from ants, while the disk version contains an original scenario that didn’t make it into the final game. Here, a bandit has holed himself up in a cave, and it’s up to Freddy’s knowledge of explosives to trap him. The town here consists of only a few screens, with many exits reminding the player that this is only a demo, but there are a lot of unique jokes, dialogues, and assorted stuff that makes it worth playing. It also provides you for something to do in the swamp, which is a mostly useless area in the full game. 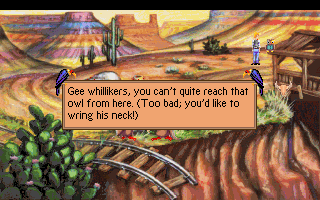 Freddy Pharkas really could’ve used another sequel – the game really only contains a handful of vignettes, and the townsfolk are amusing enough that it would’ve been great to revisit them with another story. As a standalone, it’s still a fantastic title, and definitely a noteworthy comedy classic.