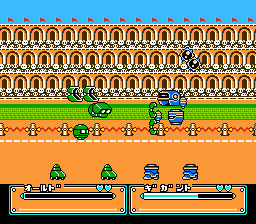 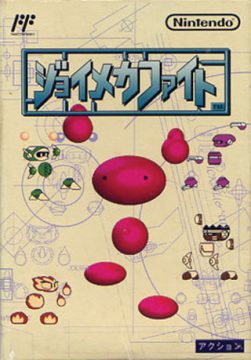 There is something that scares most people away from fighting games these day – complexity. Fighters are simply too difficult for most people to get into. The popularity of Nintendo’s Super Smash Bros. and Raizing’s Naruto games should be a testament to this. Yet hardcore fighting fans tend to loathe these games – how can you please both audiences? Street Fighter II, the game that brought popularity to the genre, did this amazingly well, but since then, the genre has just continually developed more and more intricacies.

Street Fighter II hit the arcades in 1991 and the SNES in 1992, but the old 8-bit NES simply didn’t have the processing power or cartridge space to even come close to replicating the arcade experience. A few companies, including several bootleggers, tried to bring 2D fighting to the NES crowd, and most of them were impossibly awful. But one of the few successes was Nintendo’s Joy Mecha Fight (sometimes simply referred to as JMF), which was developed in 1993, and released exclusively in Japan for the Famicom.

Joy Mecha Fight, as the title may lead you to believe, is about all about robots duking it out. It takes an incredibly original approach to the problems posed by the huge characters found in arcade fighting games – rather than having a fighter consists of a single sprite, each character is comprised of several smaller sprites, which are then animated together to create the illusion of a whole character. This same technique has been seen in a few other games – most notably in Gunstar Heroes, which was released a few years later, and another fighting game, Ballz, tried a similar technique, but to much worse results. But here, it looks pretty decent, and manages to sidestep the limitations of the hardware. It might take a little while to get accustomed to the effect, but once you do, it controls quite well. 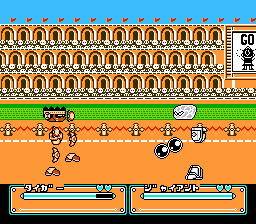 When SFII was initially released, having eight playable characters in any video game was a pretty cool novelty. So, large casts quickly became a major part of the draw of fighters – Capcom could get people to purchase yet another version of SFII just by giving it a few more characters. Whereas, people would often complain about a game having less combatants than expected, like with Primal Rage or Mortal Kombat. While casts were climbing into the teens in the arcades, Nintendo went and released a game for a 8-bit console that had more characters than any other fighter out there at the time, or even most of them today.

Virtually every site, FAQ, or forum poster on the internet will tell you that there are only eight playable characters in Joy Mecha Fight. In reality, it has an astonishing thirty-six playable characters in all – by far the largest cast in a fighter in 1993 (Nekketsu Kakutou Densetsu had 22 the same year, Tsuppari Wars had 20 in 1991, and Tenkaichi Bushi – Keru Naguuru had 16 in 1989), and the most before King of Fighters ’98 half a decade later. This mix-up is due to Nintendo having locked the other twenty-eight characters in a way that keeps most people from finding them through regular play.

At the beginning of the game’s story mode, you only have Sukapon available. You select your opponent out of seven foes, and after defeating one, you steal its head, which allows you to control it. After defeating everyone, you fight a boss, before being taken to the next level, where you fight eight more foes. After beating the first seven opponents, none of the defeated robots join your team. There are three dozen robots in total in Joy Mecha Fight, although only the first eight of them are playable in story mode. Several of them are little more than palette swaps – eight of which are Ken-and-Ryu-style clones of the first eight characters. 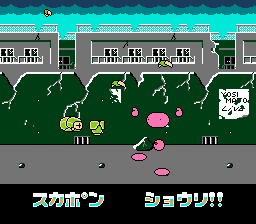 If this whole bit seems a little Mega Man-y – well, it’s obvious that’s what the developers had in mind. The opening story tells the story of two inventors – Little Ermin and Ivan Warner. Ivan, who looks like a 1920’s old tyme villain, complete with huge glasses and handlebar mustache, steals all of the robots, except one – a comedy droid named Sukapon – and evilly reprogramms them. With Ivan threatening to take over the world with his vast army of bots, Sukapon is reprogrammed as a fighting machine to kick all of the other robot’s asses.

There are a handful of major differences between this game and most fighters. Matches are in a best three out of five format, with the winner regaining only a little health after each knockout. This works fantastically in KoF, where you have teams of three, but with a lone character and no timer whatsoever it can mean that battles sometimes last a bit too long. Additionally, backgrounds go on forever, much like the Tekken games – there are no “sides” to the playing field, and the background design simply loops. The biggest difference lies with the control scheme. It’s a combination of conventional 2D fighting game moves, like half circle motions or charge moves, and more simplistic commands, like simply tapping A and B at once. It’s pretty easy to get into, which makes it very beginner friendly. This being on the Famicom, there are only two buttons – a punch and a kick button. However, you’ll do different moves by holding the direction pad with an attack, greatly widening your arsenal.

There are a few other differences as well. There is also a very interesting technique that certain characters have that might seem familiar to fans of the Mario RPGs: timed attacks. For certain projectile moves, if you tap the attack button as a projectile hits your foe, it will do more damage. I have yet to see this kind of thing in any other fighter. Making it even more beginner friendly, there is a tutorial to show off the character’s specials or throws. There is also the option of practicing these or any other moves. Since there aren’t any screaming voices that announce the name of your attacks, the names of specials attacks are shown above your health meter when they are performed. Something else interesting is that there are “hidden” variations of certain specials, such as the ability to turn a horizontal attack into a vertical attack by pushing the other button, or do a “Dragon Punch” move higher if you enter a command on the D-pad first, among many others. Sukapon even has a move with a whopping five different variants.

It also has a couple of innovative jumping techniques. After jumping straight up you can change direction mid-air, though only slightly. It’s also the first fighter ever with long jumps or multiple jumping distances. Most characters will jump a greater distance than normal if you jump while walking forward, as opposed to jumping from a stand-still. Not every character can do this, but those who can’t generally have longer default jumps both backward and forward. 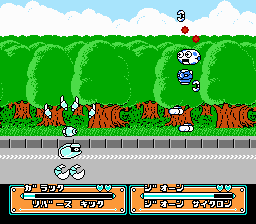 For JMF, Nintendo was able to produce graphics that are easily among the best that their console has to offer. Both characters and backgrounds are well detailed and designed, and the color palette might actually best Kirby’s Adventure for the best looking on the system. Most astonishing of all is its huge character sprites, which are as big as those for most SNES fighters. There’s quite a bit of flash to the game as well – specials are often really over the top, and among the most original that you’ll find in the genre. Sukapon and Skapokon even share a hidden move variant that does a randomized level of damage. It’s also worth noting that, because each sprite segment is simply being moved across the screen rather than having to move through a series of animation frames, JMF technically has the smoothest animations for any 2-D fighter ever made. Its music is great, light hearted Nintendo-style compositions that are great on their own, and perfect within the context of the game.

If there’s any real problem with Joy Mecha Fight, it concerns a few of the clone characters. Each of the combatants in the fourth area are clones of the eight main robots, with virtually, if not completely, identical movesets, but with their attacks having been made more powerful. So, most of them practically obsolete the character they are based on, by leaving the originals as nothing more than nerfed versions of other characters. However, this does make them kind of like JMF’s equivalent of Dan Hibiki. So, they’re good characters to choose for an extra challenge. Otherwise, it’s relatively well balanced, but the area bosses are perhaps a bit over-powered, due to them doing more damage with their moves. However, there are amazingly quite a few match videos of Joy Mecha Fight on YouTube that prove that you can win any match up if you are properly familiar with your character’s moveset.

There isn’t really any formal combo system to speak of in Joy Mecha Fight, which can make it a bit strange to play if you’ve been acclimated to other 2D fighters, but you can technically perform a few combos with a bit of experimentation, and it still manages to play remarkably well, all things considered. It’s actually smoother than a lot of the other Street Fighter clones at the time, which is definitely quite a feat on Nintendo’s part. The computer controlled characters aren’t particularly bright, but we’re still having problems with stupid or cheap AI years after the release of this game, so that’s acceptable. The two-player mode alleviates this concern, naturally.

Overall, Joy Mech Fight is an excellent and totally beginner friendly fighter that I would recommend to anybody, regardless of whether or not they like fighters. Smash Bros. fans have long talked about hopes of seeing these characters in a future Smash Bros. game, and honestly, that would be nice. If nothing else, for a veteran, there is something novel and charming about seeing this kind of game in action on an 8-bit system. There’s also a fan translation done by AlanMidas, which is good for making sense of the sparse (but rather silly) story.

Joy Mecha Fight was also released for the Wii Virtual Console, but once again only in Japan and other East Asian countries.

Links:
Japanese Joy Mecha Fight Fan Site Probably the only site of its kind. Best of all, it has the complete movesets for all 36 characters. It’s entirely in Japanese, but the moves are displayed with arrows for the D-pad directions, and the letters A or B for their corresponding buttons, so it’s easy to make sense of it even if you don’t speak Japanese.
Famicom World – Joy Mecha Fight Another review.
Dark Scarfy – Obscure Video Games Yet another review.