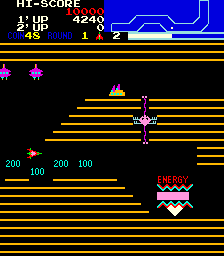 SNK is very well known for their Neo Geo output of the 1990s. Ardent fans will also remember early successes like Ikari Warriors and Athena, but the company has been around almost since the beginning of the Japanese coin-op video game industry. By 1981, SNK only had a few mediocre games under their belt, but this would change with Vanguard, which had a major impact on the shoot-em-up genre.

One of the formative scrolling shoot-em-ups after Scramble, Vanguard one-ups Konami’s title in multiple ways and brings a number of firsts. For one thing, rather than picking a direction for scrolling and sticking with it, the game can scroll horizontally, vertically or even diagonally. Likewise, it’s possible shoot in four directions rather than only one as in Scramble (or two if you count the missiles). The four cardinal directions are each mapped to a button in the arcade version, enabling the player to fire independently of the moving direction. Vanguard is also one of the first arcade games to feature a boss fight at the end of a round.

The game also uses synthesized voices, which announce the name of the current zone or the next zone that is about to be entered, or the words “be careful” when the invincibility is about to go out. The music is not exactly original, as the main theme was taken from Jerry Goldsmith’s score to Star Trek: The Motion Picture, and the power-up tune was taken from Freddy Mercury’s score to Flash Gordon. They may be a bit hard to recognize at first due to the bleeping implementation, but they’re definitely the same.

While Vanguard still has a fuel system seen in Scramble and Super Cobra, the player refuels by killing enemies rather than picking up fuel crates, which creates a much more energetic game. Another core element is the energy pod. When touched, it gives the player ship temporary invincibility, allowing them to destroy enemies and even terrain by ramming into them. 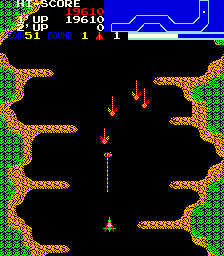 Each round in Vanguard is divided into different zones, or “Patterns”, as they’re called on the Japanese flyer. The “Block Pattern” is a fairly simple introductory area. At first the blocks that make up the stage boundaries are light blue, enemies are not too aggressive and there are many energy pods. Eventually the blocks turn green and the attackers put on more pressure.

The “Rainbow Pattern” is a transitional zone between the other patterns, where you fly diagonally along a tunnel as rows of orbs keep appearing and hovering up and down across the center of the screen. At first this is relatively easy-going with three orbs, but halfway through their number is increased to five, leaving almost no safe space on screen.

The “Styx Pattern” is similar to the first, but the diagonal lines sticking out of the floor and ceiling limit your evasive movement and prevent the installation of any energy pods.

The “Stripe Pattern” represents an enemy home base, where you can shoot down various defenseless structures for score, but need to take care of an ugly alien creatures that’s sticking its tentacles out of its cave to get you and energy doors that can only be deactivated by shooting their power generators. 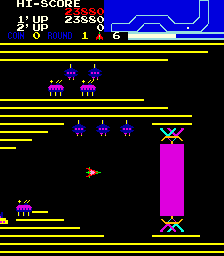 Towards the end of a round, the game transitions to vertical scrolling for the “Blitz Pattern”. The first half has rather harmless worms just flying by, but then they are replaced by vaguely Facehugger-looking creatures, who leave behind an explosion that can take your ship with them even as they are already destroyed.

Finally awaits the “Castle Pattern” with the moth-like intergalactic aggressor Gond hiding behind two rows of moving shields, which only leave open a path for your laser for a brief moment. It is also imperative to quickly move up to the upper part to avoid the turrets at the side. Gond can be considered the game’s boss enemy, but he takes only one hit before the game transitions to the next round with a slightly different zone arrangement. The game keeps swapping between the two maps, with increased speed from the second loop onwards.

The entire first round is more of a practice run, but beyond that Vanguard can be extremely difficult even to veterans of the shoot-em-up genre. While it looks like an antecedent to games like Gradius, it needs to be approached very differently. Trying to memorize specific enemy patterns won’t get you far, as the appearance of enemies changes dynamically based on your ship’s position. Rather, it is necessary to learn a general strategy for each zone to maximize the chance for your survival. Trying to destroy everything usually does more harm than good, and instead it’s often preferable to stay out of your opponents’ way. It’s also imperative to make good use of the four shooting directions. In the diagonal stages, for example, it’s safest to stay around the center of the screen while shooting the respawning orbs above and below. 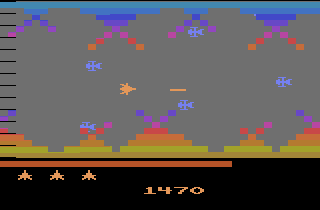 Vanguard was ported to both of Atari’s consoles that were available at the time. The Atari 2600 version takes a graphical downgrade, but that was to be expected. The map is no longer on the HUD but has moved to a separate screen shown before the beginning of each zone. The diagonally moving stages now scroll vertically, as does the Striped Zone. The latter has also been simplified a lot and now lacks the force fields and cave aliens.

Since the Atari 2600 only supports one-button joysticks, the control scheme needed to be redesigned. Your ship now constantly shoots forward, but moving into a direction will also cause it to shoot that way, even firing up to three directions simultaneously when moving diagonally backwards. The Star Trek theme does not make an appearance during the game, but the invincibility theme is still there and has been converted remarkably well, despite cutting off near the end. The console couldn’t quite recreate the color coding of the original, but uses varying rainbow patterns for the walls in all zones instead. All things considered, Vanguard is an impressively faithful port for a device that couldn’t even get a proper version of Pac-Man.

The Atari 5200 version has better graphics, music, and sound than the Atari 2600 version, but still uses the same firing mechanics version despite having access to more buttons. The game’s HUD is also closer to the arcade version, though it is formatted to 4:3 rather than the original vertical orientation. 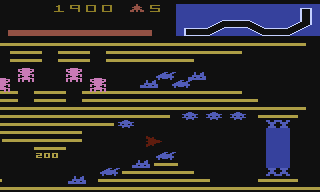 In 2011, SNK rereleased Vanguard on the PlayStation Network as part of their PlayStation Minis line of ports of their classic arcade games. This version is mostly arcade perfect, and allows multiple options for viewing the game.

Vanguard betrays its age with its simple structure and limited content, but has still aged better than many other games from its era and is still worth a play to explore the history of SNK or the shoot-em-up genre. The graphics, although primitive, are quite detailed for a game from 1981 and refreshingly colorful. The interesting shooting mechanics that combine twin stick shooting (even though the cabinet actually used buttons) with a conventionally scrolling shooting game still make it stand out from the crowd. 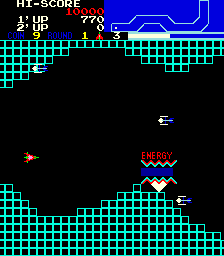 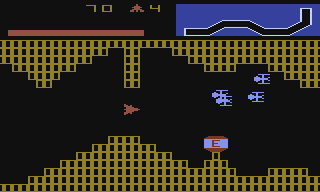 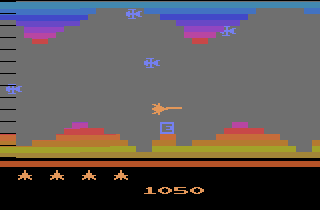 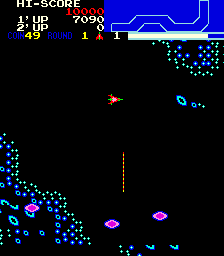 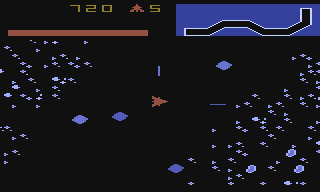 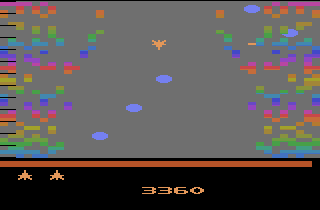 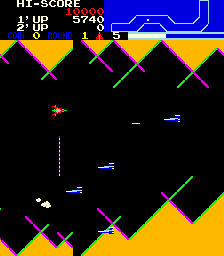 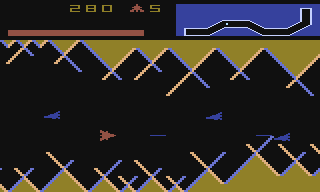 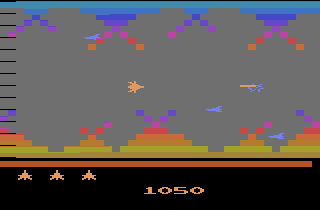 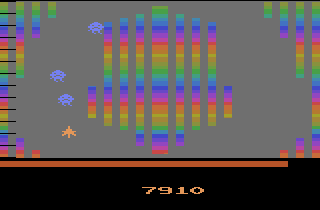 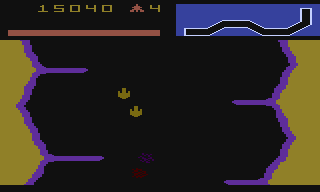 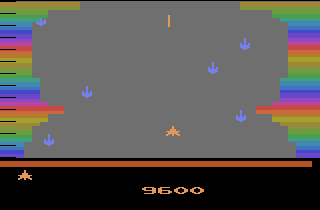 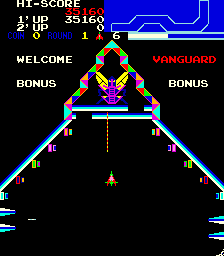 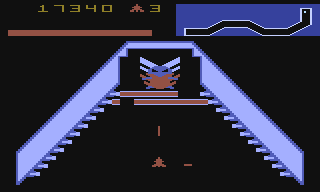 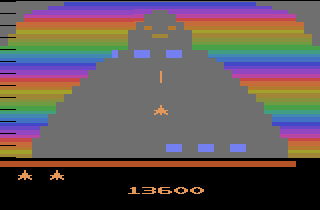