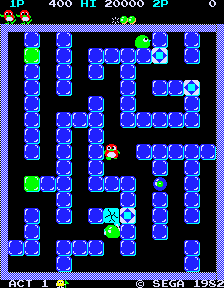 In Pengo, one of Sega’s first big arcade hits, you play as the titular little red penguin forever trapped in a maze of ice. Your goal is to hold off the blob-like monsters known as the Sno-bees for as long as you can, advancing through the levels, before you are inevitably overwhelmed by them.

Each level is made up of a maze of blocks, a few eggs that the Sno-bees will hatch from soon after the level starts, and more eggs hidden under the ice that will hatch sometime during the level. You control Pengo with the joystick, with the fire button being used to kick in whatever direction Pengo’s facing. If a block’s in front of him when he kicks, it値l slide until it hits something, and if a block is trapped against something when he kicks it, it’ll shatter. You kill Sno-Bees by kicking ice blocks into them, and if you can get more than one with one block, that’ll earn you a lot of extra bonus points. Besides the regular ice blocks, there are also a few diamond blocks scattered around the maze. Not only are the diamond blocks unbreakable, but if Pengo can line them up in a horizontal or vertical line, he’ll get a ton of bonus points. If you池e having trouble killing Sno-Bees with the ice blocks, you might want to try lining up the diamond blocks, since lining them up will also stun all the Sno-Bees on screen, letting you walk over them to kill them.

The Sno-Bees make a pretty valiant effort to not get killed, and they tend to alternate between wandering the maze and actively hunting you down at a moment’s notice. Either way, they’re making things harder for you. When the Sno-Bees aren’t chasing you, they’re wandering around, smashing all your ice blocks, and generally making it so it’s harder to kill them. When they’re chasing you, they will amost always take the most direct path possible towards you, smashing through as many blocks as they need to reach you. Some Sno-Bees are also hidden inside ice blocks, indicated by the blocks that flash different colors and a meter that shows how many eggs are left on a board. Once you kill off so many Sno-Bees, more will hatch from the ice blocks and come after you. You can stop more Sno-Bees from spawning by shattering an ice block with an egg in it, which means less enemies for you to deal with. You also need to be quick about clearing the board, because taking too long mean all the Sno-Bees become even faster, along with making it so you don稚 get any bonus points for clearing a level.

So, what you basically have is a game about monsters who alternate between actively making things more difficult for you by destroying the things you can actually kill them with, and hunting you down as efficiently as possible. It’s like if the ghosts In Pac-Man went around placing more pellets for you in between homing in on your position all the time. There is one trick that’ll help a bit, where Pengo can kick the borders of the screen to stun any Sno-Bee hanging near them, leaving them open for Pengo to walk over them and destroy them. This isn’t something you’ll always be able to rely on, though, since you won’t always be near the screen borders. You also get a lot less points for walking onto a Sno-Bee, so keep that in mind if you’re playing for score. The Sno-Bees move pretty quickly, about as fast as you do, which means it’s often likely you’ll try to kick a block into them, only to have them smash it at that exact moment, leaving you without anything to defend yourself with.

In certain versions of Pengo, the theme that plays throughout the game is the pop song “Popcorn”. The remix is pretty catchy, enough that you’ll hardly notice it’s the only song that plays through the game, aside from a few short jingles. In later revisions, it’s replaced with an original tune. This song doesn’t sound bad, even if it’s not quite as infectious as “Popcorn” was. I’s likely due to the fact that the song was unlicensed for use outside of Japan, but the developers didn’t realize it (or care) until after it had been released. The graphics are pretty simple, like a lot of arcade games of the time, but the sprites are bright and colorful, and it’s easy to tell what everything is. Much like Pac-Man, there are also have little intermission cutscenes at the end of every level, and while they’re not amazing, they’ll give you at least a little motivation to reach the higher levels.

For a while, the only official ports would hit Atari systems. The versions released for the Atari 5200 and Atari 8-bit computers are pretty much identical, and they play reasonably closely to the arcade. The playfield has been made a little smaller than the arcade version. The speed of the game is a lot slower, which does thankfully make the game a lot easier, but also makes it a bit less frantic. It’s also missing the intermission cutscenes, which, while not a huge loss, were still nice to see in the arcade version.

The Atari 2600 version is substantially weaker. That’s not to say it’s an awful port, and it’s leagues better than, say, Pac-Man. It has the same smaller playfield as the Atari 5200, meaning you don’t have a whole lot of room to move. To compensate, the Sno-Bees are a lot slower and not as agressive, and there’s only three on screen at once. They did manage to fit most of the gameplay elements in, though, like the diamond blocks and the ability to kick the sides of the screen. It’s not nearly as difficult as the arcade version overall, which isn’t entirely a bad thing. They even managed to get the theme from the newer arcade version in, but only five seconds worth of it. Since this is the Atari sound hardware we’re talking about, this is not something you want to hear looped again and again.

The Game Gear version is more or less a direct port of the arcade version, and one that’s much closer to the arcade than Atari ever did. The playfield is about the same size of the arcade version, with the sprites being made smaller to compensate for the Gear’s smaller screen. If you enjoy Pengo so much you want to take it everywhere you go, this isn’t a bad version to own. Interestingly, the Japanese version has a version of “Popcorn” with it, along with a new tune, but the Western versions only have the new song. It’s a pretty nice tune, its frantic tempo matching up pretty well with the actual game, but, well, it’s not “Popcorn”.

A port is also found in the Mega Drive sequel Pepenga Pengo, under the “Classic Mode”. It’s not a complete replication, mostly because it feels a little different. It’s easier, for one thing. The whole maze also doesn’t fit on one screen, meaning you have to move towards the bottom of the screen to see the rest of it. The real tragedy is that they don’t use “Popcorn” or the track from the Game Gear version, but yet another new track that isn’t nearly as catchy as either.

The best port is the Saturn version, found on the Sega Memorial Collection Vol. 1, along with a handful of other early Sega arcade classics. It recolors the graphics a bit, and resizes them slightly so the entirely playing field can fit into a single screen, plus the score display is rearranged on the side screen. It plays almost perfectly, and includes the “Popcorn” track. This is also included on assorted Windows compilations released only in Japan.

There are also two mobile ports of Pengo: one under the Sega Ages label, and the other under Sonic Cafe. 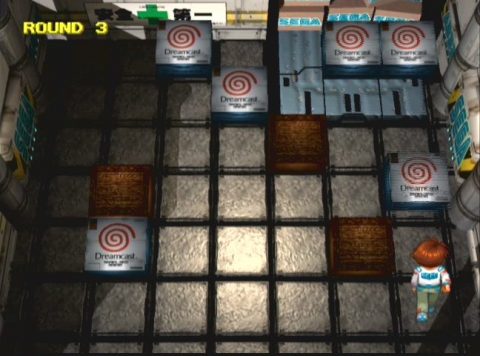 There’s also a minigame based on Pengo in the Dreamcast game Segagaga. It’s named DTTT: DC wo Teinei ni Truck ni Tsumou (Kindly Load the DCs onto the Truck). The goal is to load Dreamcast boxes into a truck by kicking them around. There are no enemies, so it’s just a matter of moving everything into the corner. The music sounds a lot like “Popcorn”, but is actually an original piece of music.

Those are the only official Pengo ports, but there are dozens of unofficial clones created for numerous platforms. Screenshots, names and platforms for many of these are listed below. Most of these keep the arctic theme, but some change things up a bit. Hopper for the Texas Instruments TI-99/4A features a kangaroo instead of a penguin. Rubble Trouble for the BBC Micro has a dark post-apocalyptic theme. Atom Smasher for the Amiga steals a number of sprites from other games, including casting Bomberman as the main character.

One of the clones for the Commodore 64 by Colosoftware was distributed under the name Pengo. However, these were leaked copies by beta testers and were circulated only as pirated copies. The official version of the game was released as Petch. Some clones different names in different terroties – for example, Petch was known as Bingo Bongoin Italy, and Percy Penguin is also known as Charlie Penguin and Il Penguino.

Pengo is also the subject of a handful of Windows freeware remakes, many of which add new mechanics. These are some of the most noteable.

Developed in 2002 by Brien King, Frostbyte Freddy has an absolutely gigantic board, plus the snobees come in different colors, which indicate their intelligence. Power-ups can also be found in flashing red ice blocks. Besides stuff like bonus multipliers and extra points, but there are also items that let you smash more blocks at once, boost your speed, or even kill every Sno-Bee on the level. There’s also a co-operative mode, where you can either play to clear the stages, or to get the best score. The graphics are mostly ripped from the arcade game, but due to the higher resolution and playing field, everything is smaller. The music is in MOD format, with many remixes of “Popcorn”.

Released in 2004 by Black Cat, this has adorably colorful spritework and some catchy chiptunes. Enemies include trolls, octopi, pandas and bunnies, all adorable. There are many more score collectiables, and a few extra power-ups. Plus, if you can connect all of the star blocks, you collect another bonus item for that stage. Includes two playable characters: Pen Pen for player 1 and the pink Deda-Deda for player 2. Home page

Produced as part of a competition to remake retro games in 2003, Pengo 3D is…not good. Beyond the fact that the 3D perspective makes a game like this incredibly difficult to play, the level construction is incredibly cluttered. Stages spawn so many Sno-Bees that they can barely move, and the ice blocks seem to be randomly placed. Interesting for a proof of concept, at least. 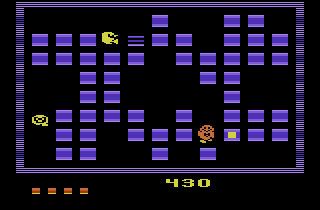 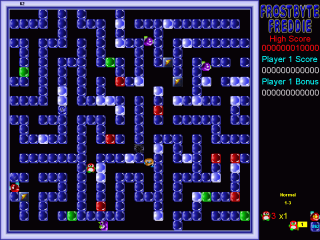 Pengo was going to make his first 3D appearance as a cameo in Sonic the Fighters, with a 3D model that looked just like his 1982 sprite. For whatever reason, he never actually made it in, but if he did, it would have likely been in Bark the Polar Bear’s ice-themed stage. Image from The Cutting Room Floor.