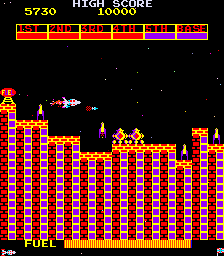 One of the earliest known side-scrolling shooters, Scramble is credited in Gradius Generations for the GBA as the progenitor of the Gradius series. Based on appearances, they don’t seem to be directly related, but there are parallels. For example, your ship is armed with two weapons – a standard gun, and missiles which fly towards the ground. It was distributed in the US by Stern Electronics.

The game is only six stages long, alternating between fields and caverns, before entering the enemy base. Enemies are sparse there, but the extremely narrow passages require exact precision to maneuver through. Once completed, you simply need to bomb the final target to win the game and begin the next loop.

Merely surviving is not enough though. Your ship is constantly running out of fuel that needs to be replenished. Fortunately, the landscape is littered with little FUEL containers, which will mystically replenish a bit of gas when destroyed. Most of the time, these need to be destroyed by your missiles, which drop downward at an arc. The key is, dropped rockets travel along with your ship, sort of like the papers in Paperboy. This might make targeting extremely difficult at first, but a skilled player can use this to manipulate the shots in their favor.

It’s probably unfair to criticize the graphics of a game from 1981, but Scramble is really ugly. This is mostly because the palette cycles through a series of eye-gouging colors every few seconds, which is both trippy and distracting.

The only real ports of Scramble at the time of release in North America were for the Vectrex and Commodore 64. The Vectrex one looks pretty awesome if you’re into vector graphics. It was called Scramble Wars in Japan. There appear to be several versions of Scramble for the Commodore 64, but many are either ripoffs or homebrewed. Ports were also developed for the PC-6001, PC-8001, and Pyuuta (Tomy Tutor) computers. In 2012, Bob DeCrescenzo released an excellent homebrew port for the Atari 7800.

Years down the line, Scramble also showed up on several Konami arcade compilations. The PlayStation and DS versions are straight emulations, the latter of which obviously has a bit of trouble due to the resolution changes. The Game Boy Advance version zooms in the display and shrinks the status bar to fit on the right side of the screen. If you enter the Konami Code, you’ll activate an updated version that includes three ships to pilot, updated graphics, and actual music. The new visuals are equally as gaudy as the original. The Xbox 360 version offers updated graphics as well, which look substantially better.

Super Cobra is the sequel to Scramble, although it really just expands on some of the original’s concepts. Primarily, you pilot a helicopter instead of a rocket ship, although it handles the same way. It’s a much harder game overall, but at least you can continue where you left off. Most of the graphics are the same, but there are a few new enemies, and the game is longer, with 11 stages in total compared to six. Also, at the end, you need to grab a briefcase instead of bombing a building.

Evidently, most companies at the time felt that Super Cobra was the definitive version of Scramble, so that’s what they based their console and arcade ports on. These include versions for the Atari 2600, Atari 5200 (and 8-bit computers), MSX, Commodore 64, ColecoVision, Intellivision, Odyssey², and the Entex Adventure Vision tabletop system. Most of these were published by Parker Brothers and are missing some of the stages. Konami Arcade Classics for the PSOne is the only modern compilation to feature the game. 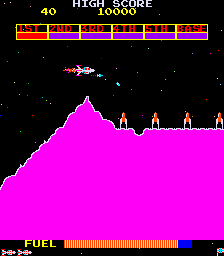 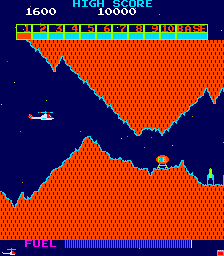 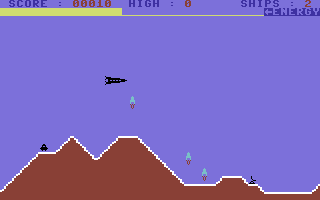 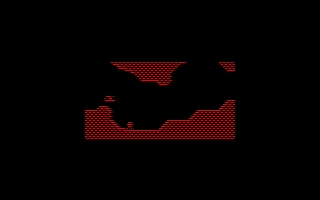 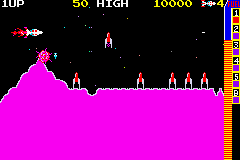 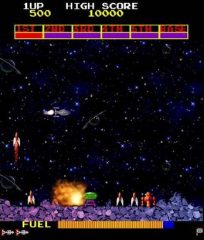 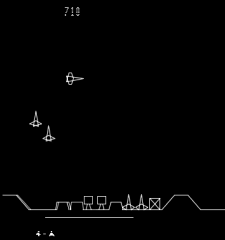 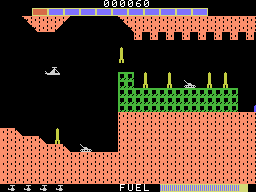 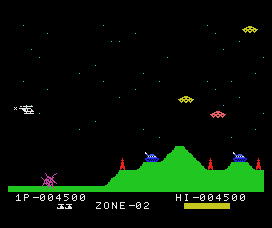 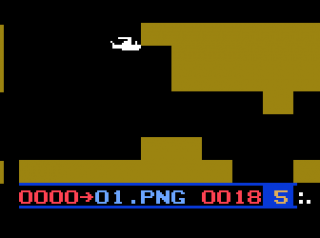