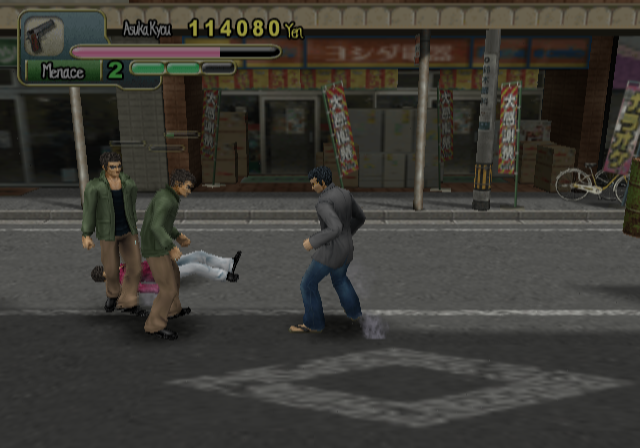 Yakuza Fury is a fun game. It may be odd to state this going in, but it seems necessary to establish this before anything else, because this is a game that does not make the best first impression.

For one thing, it’s a budget game, originally released as part of D3 Publisher’s ill-reputed Simple 2000 line. The cover art to 505 Gamestreet’s European release is hideously cheap. Who’s that gun-toting lady in a red dress, standing next to a pile of loose change and a tiny plastic gun? Could she be the first gaijin woman to make it in the ranks of the yakuza? Who knows; she’s not in the game. At least the logo has a dragon in it.

Reputation and packaging aside, things don’t immediately look up once you start to play; your character is slow, the controls awkward, and you seem to be getting knocked down a lot. You might be tempted to turn it off right then. But stick with it long enough to finish the first level, and you will gain access to a shop that sells clothes and weapons. Said clothes can not only increase you power and defense, but your speed and ease of movement, too; before long, if you know what’s good, you’ll have purchased a Grey Suit, improving gameplay considerably. By the third chapter, as enemies start packing weapons and the story gets into gear, is when Yakuza Fury really shines. 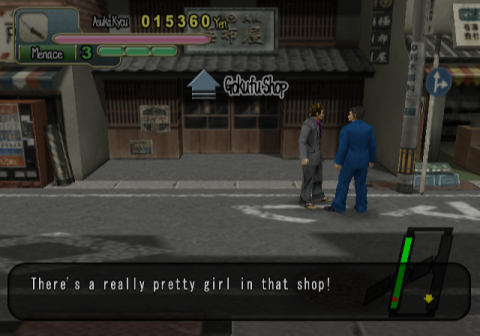 So what kind of game it is, exactly? Well, it’s kind of like River City Ransom in Yakuza‘s setting, with a few twists of its own: a beat-’em-up/RPG hybrid, divided into chapters, with multiple possible paths and endings.

At the start of each chapter, you’re free to roam around town, shop, talk to NPCs and fight punks for money. Eventually you run into someone who tells you where to go, or you trigger a cutscene, which leads you to the type of side-scrolling level you’d find in any game of the genre.

Your current moveset also depends on the clothes you’re wearing; some will let you perform throws or running or spinning kicks, while others grant you access to special moves that may boost certain stats temporarily, knock everyone to the ground or even regain some HP. These special moves use a portion or all of your Menace gauge, which fills up as you use physical attacks. 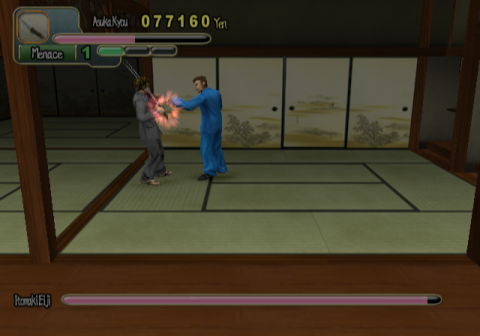 Another important aspect is the weapons, which, contrary to your typical beat-’em-up, are permanent (though guns do run out of bullets). While they can also be bought, every armed opponent you defeat leaves his weapon on the ground for you to pick up, and you can find some more in crates and boxes, so there’s plenty to go around. They’re powerful, too; there’s a satisfying feel to cutting up helpless enemies with the washizuki (a type of short sword used by yakuza) and katana, and guns are so deadly that saving up bullets until the end of a level allows you to swiftly gun down most bosses without any trouble, which, while unchallenging, is loads of fun, and certainly fitting for a game about gangsters. Nonetheless, there are reasons not to go overboard with weapon use.

In Japan, Yakuza Fury was subtitled The Ninkyo, which refers to the ideal of chivalry yakuza are supposed to aspire to, so it’s fitting that it’d have an honor system. While its functioning is somewhat obscure, using weapons, particularly guns, against unarmed opponents, or attacking NPCs in any way, is considered disreputable. A complete playthrough normally spans five chapters, but there are ten in all; the chapter you reach next depends on your honor level when you finish the current. Use weapons all the time and you risk triggering the bad ending as early as Chapter 3; mix weapons and fists to varying degrees and you’ll be able to make it to one of four more positive endings. Using your cleared game data, you may carry your inventory over into the next game. Should you manage to keep your honor level high enough, you may then reach the Real End chapter, followed by an Epilogue taking place three years after the main events. As a single playthrough only takes around three hours or so, the multiple paths provide some much-needed replay value. 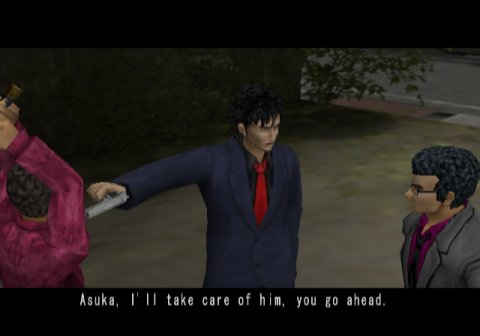 Yakuza protagonists being uncommon video game protagonists outside of Sega’s seminal series, the lead character here, Asuka Ryou, initially comes off as a rip-off of Yakuza‘s Kazuma Kiryuu, with his white suit and spiky hair, though his appearance changes significantly once you get him new clothes, hairstyles and facial hair. More importantly, two things distinguish the two games’ approach to story; the first is of course scale, Yakuza Fury being a much smaller game on a smaller budget, and the second is its refreshing lack of shame at actually being about yakuza. No former-gang-member-with-a-heart-of-gold babysitting little girls or helping shy orphans make friends here; Asuka’s story is that of his rise from a fresh recruit to the boss of an alliance of yakuza clans, through kicking ass and taking names in times of turmoil.

This is the background established at the beginning: five rival yakuza clans have formed an alliance under the leadership of the Uotou Clan’s Bokutsu Eiyuu, dividing up turf among themselves in order to put an end to a bloody conflict. Asuka is just a youth when he comes under the mentorship of Guren Hitoshi, an Uotou Clan executive impressed by his strength and courage in taking on a group of delinquents who’d been harassing a shopkeeper under Uotou protection. Pretty soon Bokutsu is murdered by a high-ranking member of the Nanao Clan, and the alliance begins to fall apart. As events unfold, Asuka and Guren strive to reinforce bonds with other clans, fight off the Nanao and get to bottom of it all. 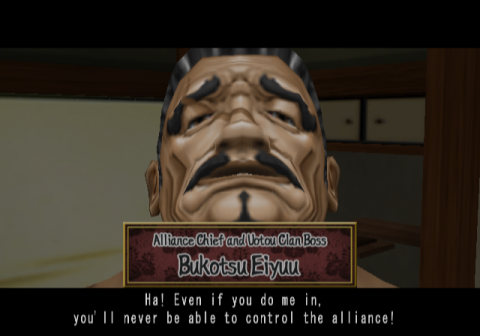 While the story’s ultimately pretty interesting, it is impaired to a degree by the mediocre localization, in which the occasional grammatically correct line can be found bumming around with poorly-worded sentences, missing words and flat-out translation mistakes, such as when a Nanao Clan leader is presented as the “Young Kurein Clan Apprentice Boss”. Good luck trying to keep the clan hierarchies in order, too, as the English words chosen to describe the different Yakuza titles are confusing and used inconsistently. A person introduced as a certain clan’s “leader” isn’t necessarily its boss, and a “young boss” may or may not be. In the end you can generally understand what’s going on, and certain moments remain genuinely badass, but it’s certainly an annoyance. Some of the descriptions attached to clothing items are vague or misleading enough to recommend consulting a FAQ, and the Japanese dub was even removed entirely, leaving lips moving to subtitles alone. At least 505 Gamestreet had the good sense to include a 60fps option in addition to then-standard 50fps PAL.

Another area where the game’s low-budget status is evident is in the graphics; while the character models look rather decent, particularly during cutscenes, the backgrounds are mostly dull and limited in both detail and variety. By sticking to a side-view, however, it avoids the camera problems so common to 3D games at the time.

The music fares better, with a number of memorable themes courtesy of one Naotoshi Nishino, formerly part of a unit called Triodesign. Typically the best stuff is heard outside of combat, featuring intense, melancholic melodies and epic electric guitars. There are also homages to classic yakuza cinema, such as the violent trumpet sound at the start of every chapter, modeled after the Battles Without Honor & Humanity theme, or the song that plays during the credits in the real ending sounding like an instrumental to the type of enka song Ken Takakura or Junko Fuji might have sung in a ’60s ninkyo movie. The influence of yakuza eiga doesn’t end there, as important characters are introduced with their names and titles appearing at the bottom of the screen, a documentary-inspired technique common to the genre. 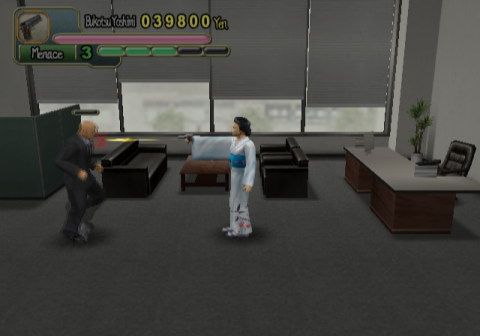 Obtaining any ending besides the bad one unlocks Double Justice Mode, which is almost a game unto itself. It’s an arcade mode featuring all 10 of the Story Mode’s levels, where you can play as any of the bosses and supporting characters. Best of all, it has a 2-player co-op mode. Aside from Asuka, for whom you can import data from the story mode, each of the 10 other characters must be unlocked; five of them are unlocked through various endings in the Story Mode, with the remaining five unlocked when you defeat them in Double Justice itself. Of note are Bokutsu Yoshimi, the middle-aged kimonoed widow of the former Uotou boss, who packs an automatic with infinite bullets; the grizzled Guren Hitoshi, who fights with wild kick combinations and keeps an hand in his pocket at all times; and Shiryuu Rika, a high-school girl and katana master, heir to the Kurein Clan.

Obscure as it is, Yakuza Fury never received a sequel and will likely never get one. Vingt-et-un Systems (French for 21, a blackjack reference) did develop a number of titles for the Simple lines, generally among the better ones. None of them is much like Yakuza Fury, though the Halloween-themed beat-’em-up/platformer Splatter Master uses somewhat similar fighting mechanics. 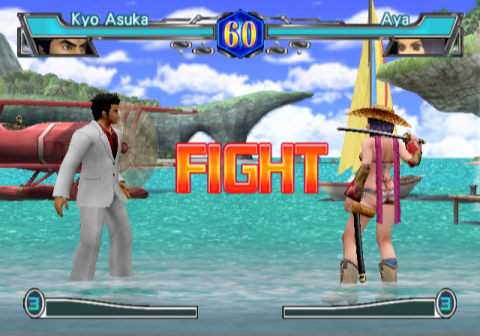 Asuka Kyou also guest stars in All-Star Fighters, which gathers characters from some of the more popular Simple 2000 games, including The Oneechanbara, Global Defense Force, Demolition Girl, and the aforementioned Splatter Master, for a crossover tournament. The barely existent storyline is shared by all, and the pre-battle banter is all pretty useless. Asuka likes to scold younger characters a lot. While it’s nice to see him again, his fighting style is different and though he’s one of the few among the cast to have his own stage, it doesn’t quite look like any location from Yakuza Fury either.

Links:
Gamefaqs There was no FAQ for this game, so I decided to write one.