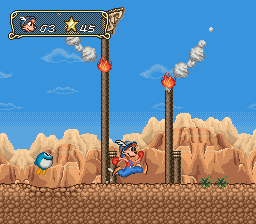 The 90s was awash with mascot platformers, most of which soon faded into obscurity. Although it may be easy to ridicule them, there are plenty that did try to do something compelling. One of these is Ardy Lightfoot, a game with surprisingly solid storytelling ambitions though hampered by its somewhat clunky and often difficult gameplay.

Deep within the hidden ruins of an island, a long-tailed canine named Ardy and his best friend Pec stumble across a slate. The slate is inscribed with a poem that speaks of a great power which was divided into seven pieces scattered across the land. If all these pieces are reunited, they will grant anyone’s wish. Just then, Ardy’s village is attacked by the forces of the diabolical Viscounty, in search of these seven pieces. It’s up to Ardy to find those pieces first, with the occasional help of adventurer Don Jacoby, and stop Viscounty’s machinations.

Ardy Lightfoot is a 2D platformer where your goal is to reach the end of the level. As well as the usual running and jumping, you can use Ardy’s tail to spring to greater heights by pressing and holding the jump button either on the ground or while in the air, and then jumping off the ground once more. This is also one of two ways of defeating enemies, since you’ll get hurt if you land on them feet-first. 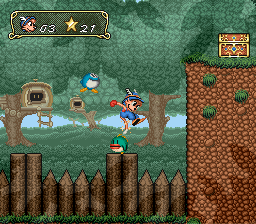 The other way of defeating them is to throw Pec at them, which is useful for enemies in tighter spaces or at an awkward distance. You can also throw him at items to more easily pick them up, such as bombs to clear brick walls and keys to open doors. He’s generally a useful ally, to the point of even having alternate forms you can uncover from treasure chests. These forms, a pink one where you can temporarily fly freely on his back and an orange one where you can destroy brick walls and certain enemies, are only around in a couple of stages but they add some nice variety to the gameplay.

However, Pec also protects you for one hit, so getting hurt also means you lose him. He can be recovered from treasure chests, but getting hit again will kill you and send you back to the last checkpoint. It’s a fairly harsh system, making you vulnerable and reducing your ability to fight back in one swoop. When it comes to the stages making use of the alternate forms, they also force you to die and restart from the previous checkpoint since you can’t progress without those specific abilities.

Sadly, that harshness becomes more difficult when the controls are as finicky as they are. You get a burst of speed after moving for a second or two, even when in the air. This means you have to not only do running jumps to get across larger gaps, but you have to adjust yourself regularly to not careen off ledges during sections that require more precise platforming.

Combine this with the small range of your tail bounce attack, where you aren’t always guaranteed to consistently hit enemies, and the end result is a game where playing it is always a bit awkward. This wouldn’t be so bad except for how challenging things get. Levels quickly turn into tight platforming gauntlets that often demand fast reflexes and movement, with maybe one or two checkpoints at most to keep things from being too unbearable. 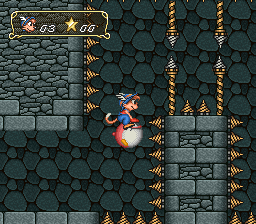 Admittedly there are some concessions made to the player. You have unlimited continues, stars are bountiful enough to recover a life or two once you find 100, and even the final stages of the game will only force you to tackle one batch of obstacles per level so you don’t have to repeat too much upon death. If you can memorize the level design well enough and take your time, the difficulty and odd controls can be gotten used to.

But even so, Ardy Lightfoot is just a bit too awkward to play, and it often gets in its own way when trying to challenge the player. The middle stages are particularly brutal, with frustratingly lethal moments placed back-to-back, long gaps between checkpoints, and some of the more irritating bosses. Bosses are generally quite tricky, making you dodge various attacks before offering only a limited window to get a hit in. Some bosses are fairly manageable, and others can become an exercise in annoyance.

It’s a shame, considering that the game’s got some very admirable qualities. For a start, the adventure is briskly paced, regularly swapping out environments every stage or two and presenting some new gimmick or challenge. One level will have you making your way up a ludicrously tall tree, while the next sees you scouring the insides of a giant worm for a gem, and the one afterwards will put your platforming skills to the test. Some stages are even pure spectacle, such as a minecart chase early on that’s followed by a boss battle.

Things are always changing, adding plenty of variety to the obstacles you encounter and giving you reason to keep playing. Even the degree of challenge varies, with some stages acting as a calmer reprieve from the more bombastic or difficult ones. You’ll never know what’s just around the corner, and this is further emphasized by a strong use of storytelling. Levels are often bookended with cutscenes that visually move along the story, adding small character moments, dramatic twists, and more. 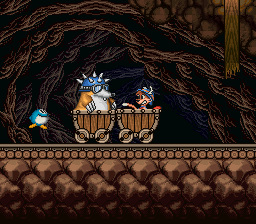 For such a middling platformer, there’s a real attempt to give things a dramatic weight. The music by Katsuhiro Hatano and Akiko Hashimoto adds to this, going for a pleasantly arranged faux-orchestral vibe that brings to mind JRPGs of the day. Tunes vary between determined marches, tensely scored ambience, and plenty of other styles that fit the mood of each level nicely, although the tracks are a little forgettable.

The graphics aren’t slouching either. The game is artistically sound with charming character designs, plenty of unique environments with solid color use and neat effects such as shadows of leaves in the woods and the sun setting when exploring an island. Mechanically, all the onscreen elements are easily distinct from each other and it runs at a smooth framerate, ensuring you can tell everything apart and play the game as comfortably as you’re able to.

Although the end credits promise more adventures, Ardy Lightfoot never got a follow-up, and ASCII stuck to publishing/localizing games with the odd RPG or strategy game developed in-house. In its western release, the game had some slight visual elements altered to remove things such as Don Jacoby’s penchant for smoking and distressed animals tied to trees. Most infamously, the second boss had her sprites changed when she was eaten by the giant worm, so that she was found unconscious instead of being killed and burned into a pile of bones! 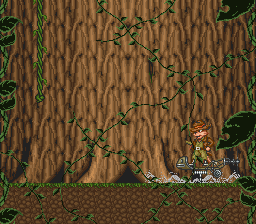 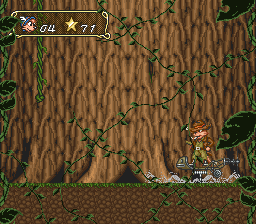 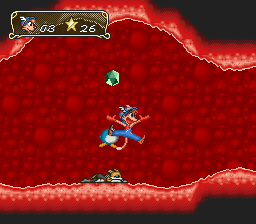 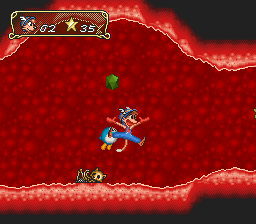 A blog post listing differences between the Japanese and English versions, along with a beta version featuring many small things changed in the final game (screenshots were used from their article for the comparisons just above): https://randomhoohaas.flyingomelette.com/shr/ardy/