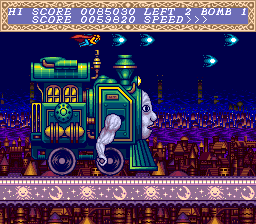 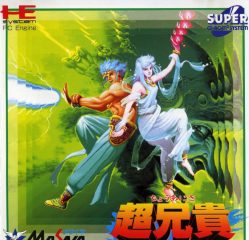 You may have heard things about Cho Aniki (sometimes spelled “Choaniki” or “Chouaniki”), the infamous series of shooters created by Masaya. While first introduced for the PC Engine Super CD in 1992, where it enjoyed some popularity Japan, Cho Aniki was granted cult pop status amongst Americans when an issue of the magazine Electronic Gaming Monthly featured screenshots of the later PlayStation game. Side-scroller shooters were a dime a dozen back in the days, but this one was a wee-bit different – instead of shooting spaceships, you fought against legions of huge, muscular, bald men. The game was quickly labeled “homosexual,” seeing as two of the primary characters were body builders wearing skimpy thongs and sporting overly happy grins. As a result, Cho Aniki quickly became known as “that gay Japanese game.”

This is something of a misinterpretation. Cho Aniki isn’t exactly gay, per se – it’s not like you’re fighting gigantic penises or have to deal with floating sperm, and there certainly aren’t any graphic displays of mano-a-mano action. Rather, the games are just really, really stupid and ridiculous up. Here, take The Cho Aniki Test: 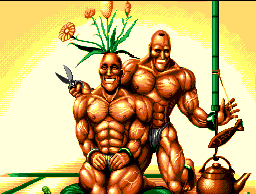 Did that turn you on? No? It’s not supposed to – it’s just really, really weird. That picture, that of two buff guys involved in some good old fashioned cranial gardening, is about as homoerotic as Cho Aniki gets, for the most part. Yes, there are lots of scantily clad muscular men – a Japanese gay stereotype if there ever was one – but it’s played for laughs. There are the occasional bad guys locked in some horribly suggestive poses, there is a weapon called the “Men’s Beam,” and yes, the holes on the heads of the main guys do look slightly phallic.

Like Konami’s Parodius series, Cho Aniki‘s claim to fame is in its sense of humor. While they’re garden variety shooters, this unique take on the male form is what separates it from the masses. Those into bizarre Japanese games will have a field day with these, if only to decipher the incredibly cryptic designs, and try to imagine just what kind of childhood trauma must have inspired these creations. Other than the four primary shoot-em-ups, there’s also a fighting game for the Super Famicom and an RPG (!!) for the Wonderswan. Cho Aniki means “Super Big Brother,” or perhaps “Super Bro,” in a more slangy term. 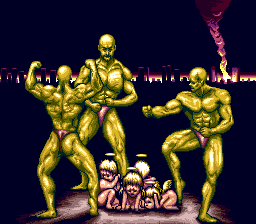 There’s an intro to the PC Engine version of Cho Aniki, but it’s hard to tell exactly what it’s about. It involves a body building contest and mad alien overloads with gigantic nose rings. Your two playable characters are the cape-wearing hero Idaten and sexy blue-haired maiden Benten. They are accompanied by some friends – primarily, two heroes named Adon and Samson, both huge muscle men with holes on their heads that can apparently shoot lasers. Also part of the cast are flying baby angels and a strange blue humanoid with a rather creepy grin. These characters act as “Options” during gameplay, and will occasionally kamikaze into bad guys.

For the most part, Cho Aniki is your normal side-scrolling 16-bit shooter. You only have one primary weapon, which can be strengthened through powers-ups. Each character also has a special attack which is unleashed when releasing the fire trigger – Idaten has a powerful laser while Benten has a spread attack. Both are armed with the usual screen clearing bombs as well. While Cho Aniki is not an overly difficult game, getting killed will send you back to a checkpoint. 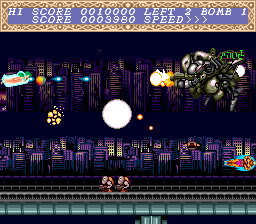 So if this is such standard stuff, what really sets this game apart? While the levels themselves are pretty sparsely populated, Cho Aniki has some of the most bizarre, messed up sprites ever seen in a shooter. This is before the series got too obsessed with scantily clad macho men – what you fight here are mostly strange mechanical creations melded with human features. The Zombie Elvis spaceship (known as “Sabu”) raises so many questions by itself.

The soundtrack just adds to the surrealistic nature, featuring strange, synth choir voices and calming melodies over the weirdness – it’s completely inappropriate at all times, and it’s what adds to the game’s charm. Apparently, it was one of the things that led to the game’s popularity – according to composer Koji Hayama’s homepage, at one point the soundtrack was outselling the game. Cho Aniki was once available on the Wii Virtual Console in North America and Europe, but with the closure of the service, they are no longer available.

While there’s nothing out there quite like Cho Aniki, the closest is Gynoug, a Genesis shooter also made by Masaya. Known as Wings of Wor in America, there are a lot of graphical similarities to the first PC Engine Cho Aniki games, including the bizarre disposition of shoving human facial features on machinery. Which makes sense – the same graphic designer worked on both titles, although Gynoug is somewhat more gruesome. It’s a slightly better game too, with some rather impressive effects for Sega’s 16-bit workhouse, although the lack of decent music does hurt it a little bit.