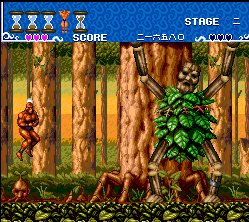 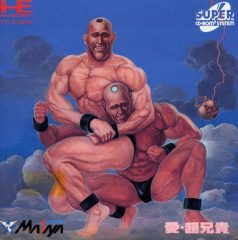 Apparently Adon and Samson, the muscle builders who were secondary characters in the original game, were popular enough to warrant their own title. And thus sprung the obsession with bodybuilders that the series has been known for ever since. Filled with much improved, cartoonish graphics, the second PC Engine game, Ai Cho Aniki (“Super Big Brother of Love”) expands the series into new realms of absurdity.

While the original game was your typical shooter, Ai Cho Aniki switches things up a little bit. You attack by inputting various controller and button combinations, sort of like a fighting game. Simply pressing the fire button shoots out a weak homing shot. Pressing Back then Forward and a fire button will fire a long range attack. There aren’t very many combinations, but it’s certainly unique. Unfortunately, this means it’s all too easy to accidentally input commands wrong, and this leads to some clunky gameplay. Additionally, your character is oriented horizontally, making it very hard to dodge shots. There is a button to make Adon spin, making him temporarily invulnerable, but there’s only so much this can protect you from. 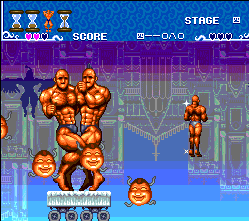 The entire game runs on a time limit. Adon can take three hits before getting killed, which reduces the timer even more. While Benten (the heroine from the first game) occasionally flies out to deliver health and time extenders, once you run out of hourglasses, it’s Game Over. With no continues to be found, it can make the gameplay a little frustrating. But the bosses are so over-the-top and strange that it’s really worth playing through to see them all. Remember Boticelli’s The Birth of Venus – you know, the goddess riding a clam? Picture that, except it’s a guy, and it attacks by raining eggplants. And that’s saying nothing of gigantic snowmen or undead Shakespearean actors with psychic powers.

The soundtrack has improved over the first game, featuring songs that are not only bizarre but frighteningly catchy (such as the circus-like song with the seal barks, or the Japanese-esque song that has notes reminiscent of “In the Navy,” or a techno beat laden with Gregorian chants.) It wraps up a package that, while having faults, is just too weird to pass up. Like the first game, Ai Cho Aniki was released on the Virtual Console, but unfortunately only in Japan.