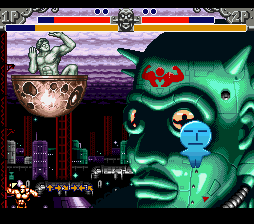 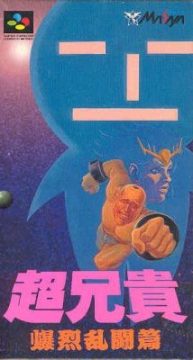 Cho Aniki‘s sole appearance on the Super Famicom, Bakuretsu Rantouden (which translates roughly to “Explosive Brawl”) leaves behind its shooter roots and instead has become a one-on-one fighting game. But not your typical fighting game, no – all of the battles take place in mid-air. It’s similar to Dragon Ball Z, but better executed than any of those 16-bit games. The control is surprisingly smooth, with a decent amount of moves for each character, especially since there are only two attack buttons and a dash button. All of the player characters are taken from the PC Engine Cho Aniki games – Idaten, Benten, and Samsom make appearances, as well as Sabu (the Elivs ship), Adam (the guy in the bathtub) and Uminin (that strange blue thing.) New characters include Botei, yet another huge muscular guy, and Mami, a female ship who has a small legion of men on board that helps her attack. Everyone has suitably bizarre attacks – Samson dances and unleashes deadly fart attacks, while Idaten turns her cute little cherubs into vicious brutes. All of the characters can also fire out huge laser attacks, although they leave them momentarily stunned. Several other bosses from the other games also make appearances in the backgrounds. 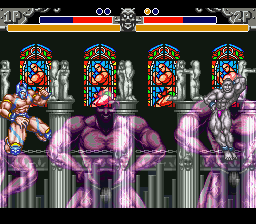 The characters are all well animated, and while the backgrounds are pretty cool (one has transparent body builders dancing in the foreground, while naked female statues rotate in the back), they’re very few in number. The music is mostly taken from the PC Engine games, although it doesn’t sound quite as good here. It’s not an astounding game by any means, and matches can sometimes just devolve into lots of dashing around, but it’s a fun departure from the norm, both in gameplay and style.