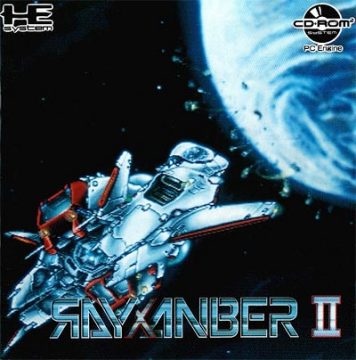 A year later and DataWest released a sequel to Rayxanber for the PC Engine CD. It’s a definite improvement over its rather underwhelming predecessor, but it’s still not exactly a great game.

The most apparent change is the visuals. While the main ship and other sprites are smaller than previously, there’s at least a generous helping of parallax scrolling in the backgrounds, and everything moves along much faster. Stage two’s ocean background is excellent and has to be seen in motion to appreciate, while the subsequent post-apocalyptic level is equally gorgeous – at least DataWest put some effort into making everything look nice. The enemy design has also improved, with freakier biomechanics. The music is mostly the same though, even re-using some tracks from before, but is otherwise okay. 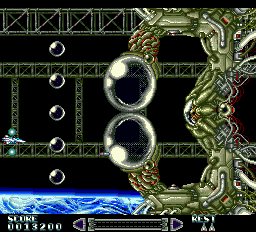 Along with improved enemy designs there’s also more of them on-screen and they move around a lot quicker. Balancing this out is the fact that with a PCE controller you should now have the option for turbo fire. This is a godsend and makes dealing with the zako waves much more tolerable. Unfortunately they made the larger enemies even bigger bullet sponges than before – seriously, don’t even think of trying to take them down with the pea-shooter, the screen scrolls so fast you’ll die long before. In fact the chronic underpowerment of your craft can’t be emphasized enough. No matter which power orb you collect, it never feels like enough, and often the best situation is to use the dash button and run away from everything. Your charge attacks, as before, are almost useless.

Using turbo fire for the dash offers you slightly better control, but the designers have taken great pleasure in contriving situations which force you to use it. The third stage, where you fly under a gigantic mechanical crab, requires you to repeatedly dash under its legs as they’re raised. Which would be fine if it weren’t for the multiple phalanxes of enemies speeding in from both the left and right, not to mention enemy cannons above and little tanks on the ground firing shots at you. It’s absurdly difficult! A quick search online confirms the consensus this is indeed one of the most maddeningly difficult shooters on the system. 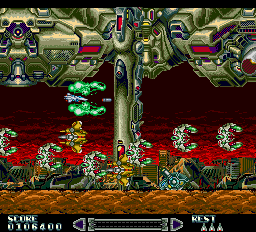 It’s a shame they didn’t consider better balancing, because again it has some interesting ideas. The stage mentioned above is pretty cool, apart from the obscene difficulty. The subsequent stage is even better, since it’s basically one massive solid wall of ice. Weapons don’t melt the ice, but your ship and a particular worm-like enemy can. The ingenious thing is that most other enemies are trapped in little boxes in the ice until freed. It creates a sandbox-like situation of emergent behavior, since the route you choose to carve affects how enemies function. Stupidly difficult, but still fascinating.

Apart from the high difficulty, the checkpoint system is also sort of broken. Presumably due to DataWest’s inability to get a handle on the PCE hardware, the boss doesn’t appear at the end of a stage. Rather, in the middle of the action in a normal stage, the screen just suddenly fades to black, even if there’s enemies still flying around. The game then loads an entirely new area for the boss fight to happen. Apart from being so weird, if you die the checkpoint is this new area, and there are some occasions when power-ups aren’t available. Just try taking on a boss with the pea-shooter!

Assuming you have the patience to deal with it, there’s a good deal of fun to be had with Rayxanber II, even if it largely comes from dealing with its overwhelmingly punishing nature. It is still quite an attractive looking game. But considering the huge number of shoot-em-ups on the PCE, many of which are great, it relegates this to lesser tier status. And plus, with the massive improvements in Rayxanber III, there’s really not much reason to play this, unless you really want bragging rights for beating the hardest PCE shooter.