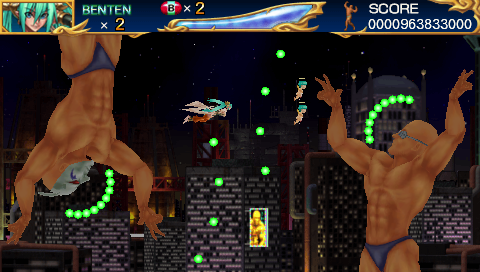 Not content to let the Cho Aniki series die off, a company called Gung-Ho Works got the rights from NCS/Masaya and created Rei Cho Aniki (which translates to “Zero Cho Aniki”) for the PlayStation Portable. It first it might seem like a remake, but that’s not entirely true. But it’s also not a completely new game either – it seems like more of a tribute to the series as a whole. Although each of the five stages are technically “new,” they take themes and many of the enemies and bosses from previous games. Although this was probably done for the nostalgia factor, or just to introduce new gamers to how strange the Cho Aniki games are, it feels awfully uninspired. The point of the Cho Aniki games is to see how much progressively weirder they get – why bother if you’ve seen most of it before? And the new stuff really isn’t all that interesting either. An underwater skeleton pirate? A flower with a face? We’ve seen weirder. The graphics aren’t anything special, but they’re also a step up from the cheapness of the PS2 game. The music faithfully captures the spirits of the older games, at least.

You once again play as Idaten and Benten, like the original, although each of them has different option types – Idaten has Adon and Samson, while Benten has two creepy angels called Mika and Eru. (Combined together, they’re supposed to spell “Michael” in Japanese kana.) There’s also a third unlockable character, an elephant man named Shouten. Each character has their standard rapid fire weapon, as well as a limited supply of bombs. The Men’s Beam from some of the other games returns too. Fallen enemies will drop little colored muscle men that add to your score, which reaches into the trillions. 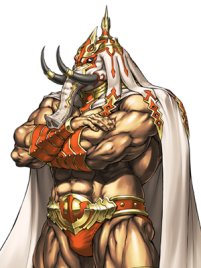 One of the biggest problems is that the enemies simply take too many hits, especially with the weakest weapons. It’s acceptable on Easy Mode, but that only lets you play the first three stages. The levels themselves wander between being poorly designed, flooding the screen with nearly unavoidable bullets (make sure to figure out where your hit box is!) or simply being boring. Overall, it’s not even up to the level of the first Cho Aniki game, which is the one it seems to most closely want to emulate. It’s a better PSP shooter than, say, Sengoku Cannon, but it’s still very mediocre. Cho Aniki Zero was released on the US PSN courtesy of Aksys. 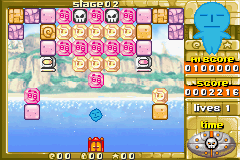 Gem Smashers is a fairly innocuous Game Boy Advance puzzle game developed by Frame Studios Interactive and published by budget house Metro3D. What does this have to do with Cho Aniki? Well, when it was released in Japan, the developers changed the little gem guys into colored variations on Uminin, that strange little man with the weird face that pops up in the Cho Aniki games as a mascot character. How incredibly bizarre.