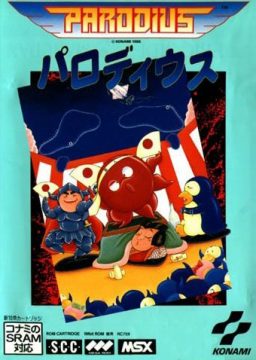 Video games, in general, take themselves way too seriously. As evolved as they’ve become since their inception, comedy video games are, for the most part, pretty rare. Maybe the designers are afraid people won’t get the jokes. Maybe they think humor comes at the expense of gameplay. But Konami felt differently, and created one of the wackiest game franchises out there: Parodius. The title (“parody” + “Gradius” = “Parodius“) is approximately as goofy as it sounds. The typical mechanical spaceships are replaced by bees, cows, and penguins. Lots and lots of penguins. Many situations are based on levels from Gradius, hence the “parody” in the name.

The Parodius series begins on the MSX. Its sequel, which is named Parodius in English letters on the title screen, is actually named Parodius Da! in Japanese, and started as an arcade game before being ported to many platforms. The subtitle of the MSX game translates to “Octopus Saves the Planet”.

There are five player characters to choose from – Tako (which means “octopus”, the character himself is referred to as “Mr. Parodius”), Penguin, Goemon (from the eponymous series, also known in English as Mystical Ninja), Popolon (from the Majou Densetsu series, also known as Knightmare and Maze of Galious), and the Vic Viper. The weapon sets are identical amongst all five, though there are unique graphical changes depending on the character. In particular, the power-up icon is different – Goemon picks up old Japanese coins, while Tako grabs cans of octopus soda. 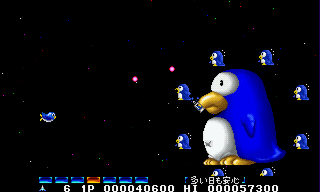 The mechanical enemies of the Gradius games have been replaced with fish, bees, and penguins. The first mid-boss is a gigantic comical Moai head that shoots snot bubbles from its nose. On occasion, you may be killed by a pile of poop. You can pick difficulty levels on the title screen, which have small phrases instead of just saying “hard”. The high level proclaims “show me hell!”

The bosses are crazy. One is a robotic hand that plays rock-paper-scissors with you. Before the fight, you pick one of three hand gestures – if you win, you beat it automatically. Another boss is a ghost doll with the face of a “Henohenomoheji”, a pattern typically drawn by schoolchildren using hiragana characters Whenever something is killed, they leave behind a quick message, spelled out in singular Japanese characters. Most enemies yell “HIDEBU”, a comical cry of pain that originated from Hokuto no Ken after the hero, Kenshiro attacks a foe and causes them to explode. One boss has enemies that spout “YAMATE” (“stop it”). When a player character is killed, they say things like “ototto” (“oops”) or “maita na” (“I’ve lost”). 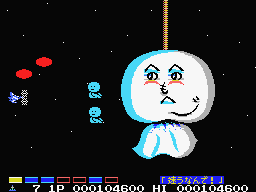 The Parodius series eventually grew a reputation for being very bright and colorful, a stark contrast towards the dark sci-fi themes of the Gradius series. Those who were introduced to the series with the later entries might find the MSX game rather dark in comparison. All of the stages take place in outer space, with stark, black backgrounds. Levels include a Japanese cemetery and a stage themed around desserts, both used for later Parodius games. Other levels feature a snow village and a mine filled with moles.

Much of the soundtrack is directly based off of classical music.  Themes include “Ride of The Valkyries”, “Flight of the Bumblebee” and “Swan Lake Suite”. According to the sound programmer, they had very little time to compose the soundtrack, and ended up converting these songs to speed up the process. The fact that it works so well together is a happy accident. It also uses the SCC sound chip for richer synth.

Enemies drop bell power-ups, similar to TwinBee. However, the effects of the bells are much different than later games. In addition to extra types of lasers, there are also “yoko warp” and “tate warp” functions, which let you warp around the left / right and top / bottom of the screen respectively. It’s incredibly weird, and the yoko warp is actually required in a few areas to get past otherwise unavoidable walls.

The ending is subversive, as Mr. Parodius discovers the true motivations behind humans – greed, lust, power – and decides that their ambitions are petty and shallow. This penchant for bizarre endings became a series mainstay. 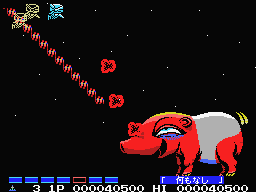 Beyond its initial release, Parodius appears on the Konami Antiques MSX Collection Vol. 3 for the PlayStation and Konami Antiques MSX Collection Ultra Pack for the Saturn, but it’s just an emulated ROM with no changes. It was also included on the Parodius Portable collection with some enhancements. The most important is that the scrolling is much smoother, which is incredibly choppy in the MSX version due to the technical constraints of the system. The visuals and music have also been slightly enhanced. There’s also an option to increase the playing field on both sides (320 pixels vs. 256 pixels in the MSX version). 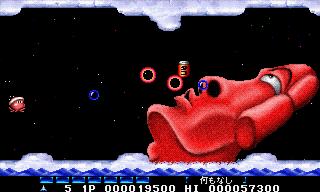