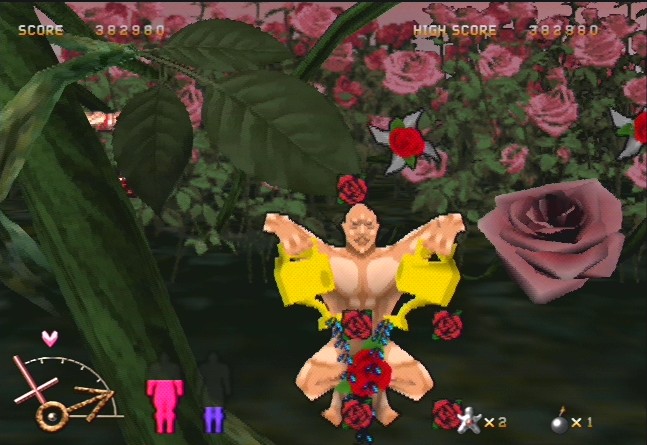 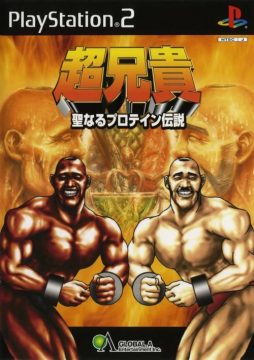 Masaya packed up its bags during the 32-bit era, so “The Legend of Holy Protein” was made by X-nauts, a team of former Masaya members, in collaboration with shoot-em-up development team Psikyo. If you’ve played any of their other titles like Sengoku Ace, you can expect the similar competent, yet somewhat unremarkable gameplay. Still, after the disaster of the PlayStation/Saturn game, it’s nice to have a title that’s at least somewhat enjoyable. There’s some sort of plot that revolves around the Holy Protein, who tell our favorite bodybuilders about some magical item that will stregthen their muscles even more.

You actually control the Protein, which is floating glob of some kind – Adon and Samson still float by as your bodyguards, and this time you can even pick from a variety of formations to defend yourself with. Additionally, by rotating the right analog stick, your characters will dance and slowly build up an attack meter that allows them to shoot the ultimate weapon: The Men’s Beam. 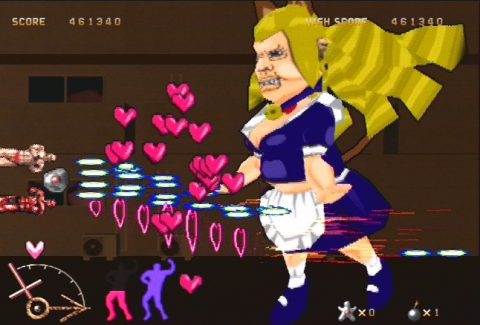 The graphics are completely terrible, low budget 3D, though given the intentional badness of the series, the totally amateurish look may be intentional. The music is somewhat dull compared to previous games, and the excessive sound effects are quite annoying. The early stages lack the imaginative craziness we’ve come to expect from the series, but it picks up as you get further. This time around you’ll find a Mona Lisa that fires lasers out of its eyes, a statue that pisses lava, a tribute (??) to Alice in Wonderland in form of an agitated crossdresser, and an incredibly ugly nekomimi (cat ears) maid. The most amusing parts are the insanely silly paintings in between levels, and the gloriously silly intro, which is animated with the same professionalism as Aqua Teen Hunger Force and features a rocking song about “pumping it up”. While it’s not as wacky as Ai Cho Aniki, it’s probably the most well-balanced and playable of the series.