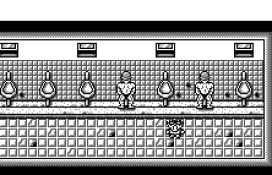 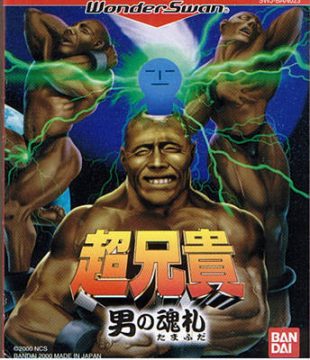 Cho Aniki makes its first handheld appearance with Otoko no Tamafuda, an RPG for the WonderSwan. The title roughly translates to “Man’s Tamafuda,” which is apparently a weird made up word, a combination of the word “tamashii” (soul) and “hanafuda” (a Japanese card game.) Which almost makes sense, given that all of the battles are card-based. Without knowing Japanese, it’s really hard to figure how the battle system works or even remotely how to play the game – seemingly, you draw cards, use them to counteract your opponent, and hopefully attack them. 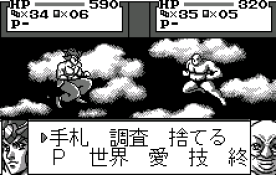 There are several protagonists to choose from, including Idaten, Benten, Adon, Samson, Yaemon (that train-with-a-face), Hikaru 17 (a new character), as well as Sabu and Adam. The game seems to take place in outer space, and you wander the galaxy in search of foes. Naturally, the trademark sense of humor is all over the place – this is probably the only game where you can prance into bathrooms and talk to the people whilst they are using the urinals. Also particularly amusing is a menu option labeled “Feelings *heart*” where your characters will ramble about nonsense, like how much they want to see a Cho Aniki anime or their opinions on bikini briefs.