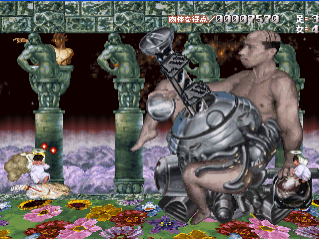 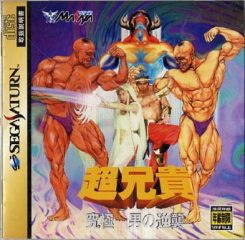 Cho Aniki hit the PlayStation and Saturn in late 1995, bringing the series to astounding new lows. The subtitle for the PlayStation game translates to “The Ultimate, Strongest, Most Invincible Man in the Milky Way,” although the Saturn game has something a bit more concise with “The Ultimate Man’s Counterattack.” Both are mostly identical, although there are some minor graphical changes and balance tweaks, with the Saturn version being slightly more difficult. It is also rated with a “yellow” stamp indicating that it’s not advisable for gamers under 18. (Sony did not have a similar rating system.) Idaten and Benten are once again the stars, and the gameplay is similar to the original PC Engine title.

This Cho Aniki game ditches the goofy cartoonish artwork and replaces it with frightening, digitized pictures of bald, freakish Japanese men (there’s a bonus video that lets you take a look at the photo shoot). The main characters looks amusingly campy, but seeing the torso of a realistic guy melded with seagull wings is more than just a little disturbing. It gets even more bizarre when you have a boss that spits limbs out of their mouth, then gets dismembered by a gigantic foot from behind it. Particularly amusing is the strange face that pops right before each boss battle, announcing the presence of tough bad guy. The surreal quality is very reminsicent of Terry Gilliam’s goofy animations on Monty Python’s Flying Circus, except with more muscular dudes. Despite all of the digitized graphics, the rest of the game looks quite poor. One level looks like it was taken straight from a PC Engine game (except for the buildings, which are constructed of both male and female torsos) – I’m not sure if this was an homage or just lazy design. It very possibly is intentional, give the parodic nature of the game. There’s a boss that’s similar to the multi-screen battleships found in R-Type, except it’s a gigantic flying man with a battleship welded to his back. There are a couple of bonus stages that feature the boss, he of a cape and horned helmet, spiraling through cityscapes, being attacked by strange little smiling guys straight out of 8-bit arcade games. Get killed and your crotch starts smoking as you plummet towards the ground.

All of the quirkiness in the world can’t save this one though, as the game itself is unfortunately quite poor. The PC Engine titles were at least competent shooters, but this effort can’t even reach that plateau. The biggest problem is with the extraordinarily underpowered arsenal. Your standard rapid fire shot is incredibly slow and weak, even when powered-up, and you don’t get any bombs. The screen is always flooded with enemies, most of which take many hits to kill. Bosses often have tremendous life meters, so the fights drag on and quickly wear out their welcome. Occasionally you can build up energy for a laser shot, but they don’t appear often enough. The only gameplay difference between this and the original Cho Aniki PC Engine game is that your Option characters are always around – however, they only hover next to your character, protecting you from certain bullets. This is still isn’t enough to keep you from dying often though. It’s enough to make this game an actual pain to play – make no mistakes, if you’re playing this title, it’s for the wackiness and not the actual game.

WWF In Your House
Night mode