Lords of Thunder (called Winds of Thunder in Japan) was published by Hudson in 1993 for the PC Engine/TurboDuo, in joint production with Red Corporation. It was actually developed by CAProduction Co Ltd., who outside of 16-bit shooters, later went to work on the Mario Party series.  Although its name bears a resemblance to Gate of Thunder, another shooter made by CAProduction for the PC Engine, the gameplay is entirely different. 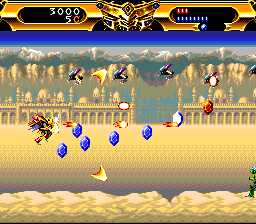 Lords of Thunder transcends the shooter stereotype, eschewing the usual space ships and sci-fi environments for a heavy metal fantasy-style setting. It follows the adventure of a god-knight named Landis (or Randy in the Japanese version). In typical fashion, a supremely evil dude named Zaggart and the six minions of his group Mistral have torn the world asunder. While this would give reason for most god-knights to set off on an RPG-style adventure, Landis is a man who knows time is money and rightfully flies off to seven stages of shooting action. 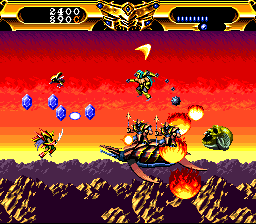 Because you are directly controlling a flying knight/badass who wouldn’t have it any other way, Lords of Thunder has a number of characteristics that set it apart from other shooters. When you begin the game you are given a level selection. The stages themselves embody the graphical variance you’d expect from a shooter: from the lushness of a plant stage, the frost of a snow-bound cavern, a barren but heavily occupied desert, a watery lagoon, a fortress atop a jagged cliff, to the hellfire of a volcano. Nothing really new in that department for sure, but the stages themselves are very well designed – intermittently featuring horizontal, vertical, and diagonal scrolling that really add to their atmosphere.

Landis gets pretty decked out, as by default he fires a constant volley of shots, and has a close range sword attack in addition to explosive bomb attacks. However, the most important aspect is the choice you make before each stage regarding the game’s sets of armors, each for one of the elements: Earth, Wind, Fire, and Water. 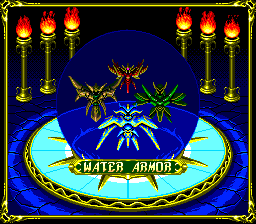 Strangely enough, there is no elemental strategy to be had from having on a certain one of the four armors in certain stages. What it boils down to is that they affect what color Landis is in the stage; but more obviously, they affect the difficulty of the game. Though the game itself has Normal, Hard, and Super difficulty levels, you’ll find out that it has additional difficulty depending on which armor you select: extremely difficult or very easy. You can basically choose the Water Armor and tear through the game in no time flat because of its ability to shoot both ways, or have a real challenge with one of the other armors. Granted, the Fire Armor is also good, as it is extremely powerful, but the Earth and Wind Armors are almost completely useless as they can’t defend themselves very well – in other words, it’s a lot harder to keep up with the enemy onslaught wearing them, even at full power. Considering the fact that the Water Armor can shoot enemies dead before they even have a chance to get on the screen, it makes the other ones seem obsolete.

Landis himself also has a few quirks. His sprite is larger than, say, the Vic Viper or R-9, in addition to enemy shots being larger than in other shooters. Landis’s sword is a very powerful weapon, more powerful than most normal shots. The caveat to this is that he has to completely stop shooting to use it – fine if it was part of your strategy, but annoying if it happens by accidentally flying too close to an enemy, allowing other enemies you would have hit to get some cheap hits in. It’s worth noting that Lords of Thunder is not a one-hit kill game, though you lose weapon energy when hit, not to mention that each stage must be cleared in one life, as there are no mid-level checkpoints. 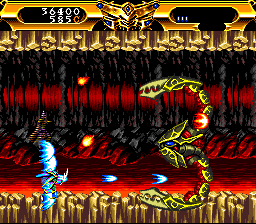 In addition, Landis also has the option of buying things before he begins each stage. Enemies, besides dropping the occasional weapon and life power-ups, mostly drop crystals, which can be exchanged for items in the shop. These include extra bombs, life and weapon power-ups, as well as shop-exclusive items like the shot deflecting shields, extra continues, and the elixir, which fully restores your health should you deplete your initial stock.

Graphically, Lords of Thunder is fantastic. The game is very colorful, with minimal slowdown even in the most extreme sequences. Some of the enemies are quite large too, especially the bosses. The enemies themselves range in design from classic fantasy adversaries like wizards and water dragons to more bizarre things like flying tortoise carriers and an evil jaw totally bereft of a face. The game also has some impressive animated cutscenes, but they take a backseat to the game’s most impressive aspect – its sound.

Produced by T’s Music, they were able to take advantage of the CD format and fill it to the brim with some of the most amazing “instrumetal” riffs and licks gaming had ever seen – years ahead of the other champion of gaming metal, Guilty Gear. For a game about flying god-knights and wizards, a rock soundtrack might seem somewhat over-the-top, but for whatever reason blazing guitars and fantasy settings go hand-in-hand together.

In addition to the PCE release, Lords of Thunder was also ported to the Sega CD, exclusively for America and Europe. The gameplay is almost exactly the same, but the graphics on the Sega CD are not quite as bright, though it still looks great. In the Sega CD version, you get stunned for a second when you get hit, plus this version is generally a bit easier. This is particularly noticeable on the highest difficult setting, where enemies in the PCE version fire suicide bullets when killed. 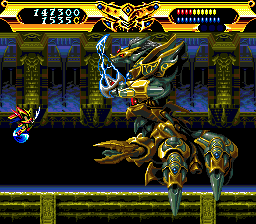 There are some slight discrepancies in the audio as well. While the PCE version has a fully narrated intro and a talkative shopkeeper, such voiceovers were omitted when the game was brought overseas to the TurboGrafx-16. Nonetheless, these voices were reintegrated into the Sega CD release, including the sexy shopkeeper. Additionally, all of the music has been rearranged to sound less raw than the TG16-CD version, although the melodies are identical. It’s not really better or worse, per se, it’s more of a stylistic change. 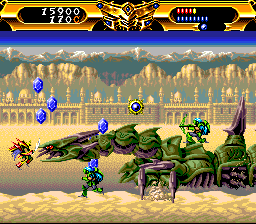 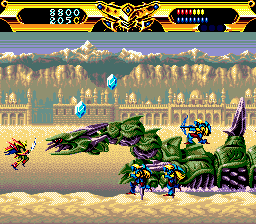