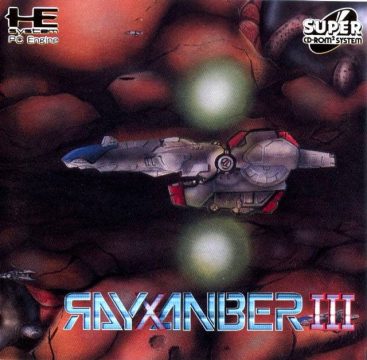 It took DataWest two attempts and three years to finally create a truly quality shooter, and it’s damned excellent. As they say, third time is the charm.

Absolutely everything has been overhauled for the better, while simultaneously staying true to the style of the previous two games. For starters someone finally fixed the dash mechanic, so now it actually works and is easily controlled. Like before there’s a temperature bar, so if it goes in the red you need to cool down before dashing again, but it’s now much easier to regulate the duration of your dash without resorting to a turbo button. Level structure and enemy attack patterns are also much better balanced to take into account use of the dash – no longer are you forced to dash headlong into a phalanx of foes because something is chasing your tail. It has legitimately become a useful tool in your arsenal. 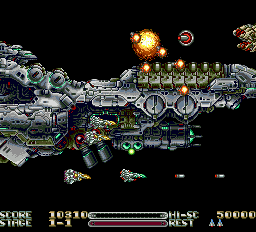 Another major improvement is that turbo-fire is automatic, so you can just hold down fire and leave it. Because you’re not relying on a controller’s turbo function this also means that the charge attack can build up while you’re spraying out walls of protective death. Power-up weapons have also been greatly improved too – whereas before something like the Red Orb gave you two weedy fireballs, now you get two massive jets of flame which can crisp most enemies pretty quickly. Everything is considerably more powerful and actually useful now, and there is genuine tactics involved when choosing which Power Orb to stick with. This also means normal enemies are seldom if ever bullet sponges. You still need to choose which direction to fire in, based on its angle at the time of collection, but enemy patterns and layout are designed in a much more clever way to make use of this, in addition to Power Orbs being more plentiful, so you’ll never be stuck with the wrong weapon.

A secondary charge attack has also been added, which is the same regardless of Power Orb collected. Once charged, release the fire button to launch two large missiles in a straight horizontal line – if you hit the fire button again these break up into a series of homing missiles which obliterate most things on screen. Better still, this charge attack can be used even when you’re down to your pea-shooter, meaning you need never feel underpowered again. The dynamics of this new charge attack are fantastic, since it creates a pleasurable rhythm of holding down fire, weaving between enemy blasts and then – when the moment is right – you raise your finger and bring it down again to unleash a torrent of destruction.

It’s not necessarily an “easy game” now, but it’s definitely a lot of fun, and the difficulty that is present is an enjoyable tension as you always feel like you can clear a section with a little more effort.  Worth noting is that the checkpoint system has changed, with two in each stage, clearly marked by the presence of a sub-level counter. These are placed much more thoughtfully, in close proximity to Power Orbs, so each progression feels earned. 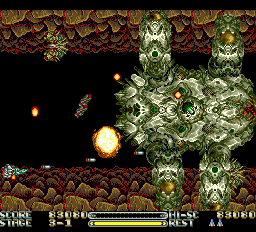 The clever ideas also go hand in hand with a much slicker and more professional visual aesthetic, also making it one of the most beautiful games on the PCE. Immediately at the start we see Earth launch an attack on the alien Zoul Empire, by sending a massive space carrier to their homeworld. The player’s ship is first to leave the docking bay, complete with neat miniature animation sequence, and in most other shooters you would dash forwards and never see the carrier again. Instead, the first half of the opening stage is spent flying around Earth’s mother ship, watching as it takes down enemies coming towards you, and witnessing your comrades also leaving the docking bay in waves. It recalls the giant ship stage in R-Type, but is infinitely cooler because it’s your ship, not the enemy’s. Little parasites will try to cling to it, which you need to dislodge with homing missiles, all while taking down enemy carriers and fleets of standard baddies. It feels exhilaratingly epic, and yet still manageable if you keep your wits about you.

DataWest took great care with this third installment to create a unified and coherent whole, so each stage overlaps with the next. After this initial assault you enter a cavernous area which leads to a boss, which then leads directly into another cavern, this time partially submerged. This chaining of stage themes carries on throughout. Particular mention must go to the watery second stage, which features some stunning wavy distortion effects and faux-transparencies beneath the viscous liquid. It also affects the mechanics of the level, since below the surface your craft is more sluggish, requiring judicious use of the dash. After this level the game pulls another clever trick, switching to an overhead view of your craft, with a deep chasm shown below. It still functions 100% like a horizontal shooter, the only difference is that all the sprites are now perceived as being overhead instead of side-on. It’s a neat idea handled with subtlety, and one that most probably won’t even notice. 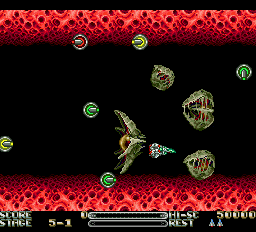 The only downside to this sequential style of level themes is that it does limit the entire game’s palette almost entirely to various hues of red and brown, since you’re either in caverns or, later on, inside the biological interior of the alien homeworld. It’s also obvious that to cram in more details some background areas are left entirely black (such as in the opening). Considering the staggering attention to detail seen in these areas though, DataWest can be forgiven for a slight lack of diversity. The music also reaches its peak, as each track nicely compliments the atmosphere of the game. It’s still got that easy listening, jazzy vibe to it, which may upset those expecting something heavier like Lords of Thunder, but the payoff with the final boss, which lacks sound effects and has a dream-like quality, is totally worth it.

For all the excellence of Rayxanber III, which is a top tier shooter, it’s sad to realize that the lesser quality of the first two games probably put many people off trying the third. It’s certainly rare and expensive enough to conclude it never sold particularly well. It’s difficult but fair, absolutely gorgeous at all times, and chock full of more clever ideas than many of its peers. Rayxanber III absolutely vindicates DataWest’s existence as a developer. Sadly, right when they seemed to have nailed it, changing markets and hardware shifts killed them off.