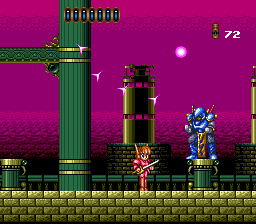 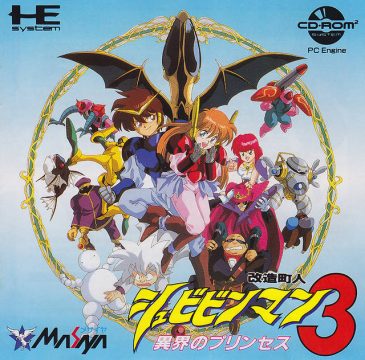 Schbibinman 3: Ikai no Princess (“Princess of Another World”) takes place some time after Schbibinman 2. The world is fairly peaceful and Tasuke and Kyapiko have taken a long vacation. One day, while sunbathing on the beach, Tasuke and Kyapiko are attacked by a space ship, the captain of which being a princess from another world. Naturally, Tasuke and Kyapiko transform and do battle with the princess and her henchmen, and after beating them to a pulp, it’s revealed that the princess is in fact just trying to enlist the help of the Schbibiman to save her homeworld from the clutches of an evil warlord named Kargan. So now the Schbibiman must travel to the princess’s world and battle Kargan and his minions. 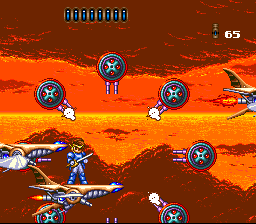 Schbibiman 3 has once again completely changed its shape, only now it more closely resembles the first game rather than Schbibiman 2/Shockman. The swords are back, as is the more traditional Schbibin Buster, only now it can be remote controlled once it’s fired. Doing this and keeping your character out of harm’s way at the same time is quite difficult, though. Not all is well, however. The gameplay feels more dumbed down than ever before. The complexity of the boss battles from Schbibiman 2 is gone, now replaced with boss fights that are little more than shootouts. The platforming elements are also gone. Most of the terrain is flat and you’re hardly ever required to jump. In fact, if it weren’t for one particular part where you have to wall-jump to escape a lava flow, it’s likely a player would never even notice the characters had the ability to do so.

The emphasis this time seems to be on combat. You’re constantly being bombarded with enemies at insane rates, sometimes 6, 7, 8 appearing on the screen at the same time. Because of this, you’re going to get hit, a lot. Luckily, the game makes up for this by providing plenty of healing items and continues. Enemies commonly drop continue points, and once you collect 100, you’ll acquire a continue. Unfortunately, although the swords came back, the upgrades didn’t. Quite a few ideas from Schbibinman 2 didn’t make the cut either, although there is one horizontal shooter stage much like the ones from Schbibinman 2. All in all, it’s a good game, but something feels amiss. The game feels somewhat rushed and broken. It lacks any sort of solid structure and constantly jumps from one thing to the next without any sort of transition, which is fairly jarring, a flaw that makes it the weakest of the quadrilogy. 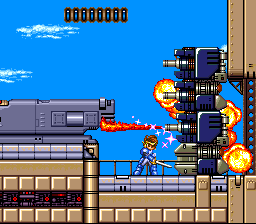 On the really bright side, Schbibinman 3 is simply gorgeous. It’s one of the better looking PC Engine CD games from that early in the console’s run. The really wow-inducing titles that most people know of, like Dracula X and Legend of Xanadu, wouldn’t be seen for a while. Schbibinman 3 opens with a fairly impressive, fully voice acted intro, and the artwork is fairly well-drawn. In-game, there are some really huge, impressive, and very well-animated sprites, like the huge flying dragon in the aforementioned shooter stage. The game also marks the return of the silly style that made the first game so enjoyable. Like most PC Engine CD games, Schbibinman 3 sports a pretty bitchin’ hard rock soundtrack full of all that cheesy ’80s synth stuff that PC Engine CD fans adore the heck out of, and should please anyone who’s a fan of games like Ys and Langrisser.