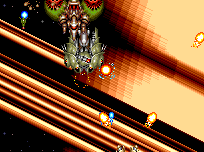 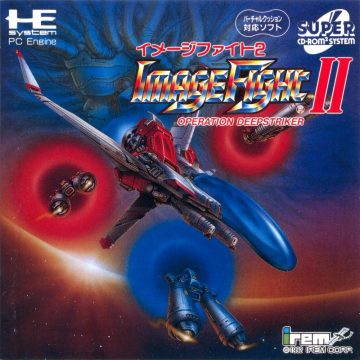 Image Fight received a sequel four years after the original, developed specifically for the PC Engine Super CD. It appears to have been built on top of the PC Engine port of the first Image Fight, because in many ways it’s practically identical. It looks similar, it plays more or less the same, it still has the same strange issue with equipping weapons (or not equipping weapons, as it were), the screen still fills cramped, and it’s still extremely difficult, arguably even more so than the first.

The only things that have really changed are minor. The graphics are bright, looking more like a typical PC Engine shooter, but they still fall into the same trap as before – they’re admirable on a technical level, but lack distinction. Some of the weapons have been changed. There are ten levels in total now – you’re not graded on the first level, and the “training simulation” takes place on levels two through five, before moving onto the real fight in levels six through ten. There’s also CD audio music, some of which are arranged tunes from the first game, but frankly they still aren’t very good. 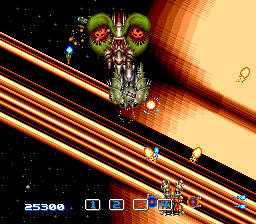 There’s also a storyline, with cutscenes interspersed between levels. The artwork in these are pretty bad, and they only take up an extremely small portion of the screen. Though the voice acting is in Japanese, the opening text scroll is in English, and details the aliens’ continuing attempts to exterminate humanity. You also pilot a new ship, the OF-3 Garuda, in the second part of the game. 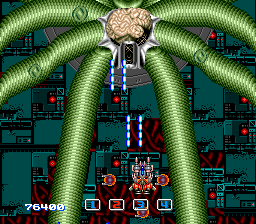 Other than the bump in difficulty, Image Fight II really isn’t any worse than its predecessor. But it also doesn’t feel like anything more than a level expansion, with some terrible cinemas and even worse music. Also, when compared to other shooters in 1988, Image Fight stood out against other similar games of the time, visually besting Toaplan’s Twin Cobra or Konami’s A-Jax. But in 1992, the shooter landscape had more competition – Blazing Lazers, Nexzyr, the Star Soldier games – leaving this on the middle tier of PC Engine shooters.