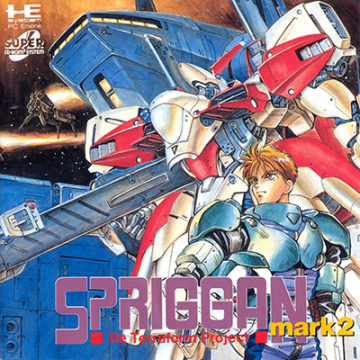 The second Spriggan game has almost nothing to do with the first, changing the setting from fantasy to futuristic military. There are some very vague similarities in the titular mecha, and some minor story relations (the mecha is said to spring from the same ancient Martian civilization), but otherwise they’re separate. Though also published by Naxat, it’s not part of their Summer Carnival series, nor is there any score attack mode.

The setup is heavily inspired by Gundam, focusing on a war on a newly colonized Mars. The hero is Greg Irwin, who initially pilots an Armed Armor called the Bartholomeu, but later gets the more powerful Spriggan. The game started production as a sequel to MUSHA, telling the story of Greg, who got shot down in the intro. 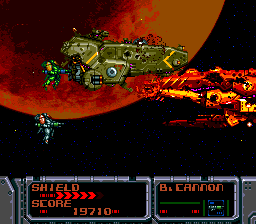 While Compile was primarily known for vertical shooters, this is one of their only horizontal ones. Their inexperience shows, especially when it comes to level design. Vertical shooters tend to have a lot of empty space, with variations of enemy patterns, but when applied to a horizontal shooter, it ends up feeling empty. The large size of the mecha also makes it a little hard to dodge bullets. To make up for this, you have a very generous shield, which can absorb quite a bit of damage and recharges relatively quickly, as long as you can avoid getting hit.

At the beginning of the game, you have three weapons, including a cannon, homing missiles, and a beam saber. Though quantities are limited, you have enough ammo that you’re never completely defenseless. Once you graduate to better mecha, you have access to several more weapons, including assorted beams, sabers, missiles, bazookas, and shields, and can choose pre-set configurations before each level. 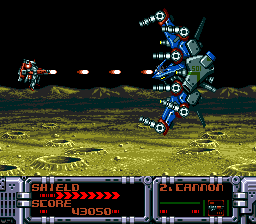 The main draw is how cinematic the game is. Most of the 16-bit CD shooters had storylines that only played out in cutscenes. Spriggan Mark 2 has these too, but there are also events that occur during gameplay, as the action pauses while the pilots talk to each other. While engaging, these breaks are very frequent, and it ruins the pacing, especially if you’ve already played it before. You might play for maybe a minute, then have to wait for characters to stop talking, then resume. You can disable these, but it also skips the midlevel cutscenes, effectively removing the story completely. Alternatively you can disable the voice acting, so you can instead speed through text. 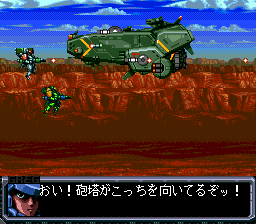 Both the open levels and huge life meter make the game feel a little unpolished, but it’s still an attractive shooter – the parallax scrolling is excellent, and the background effects, where you descend onto a planet from orbit, look great – plus the music is excellent. But the main draw, the story, is going to be lost on non-Japanese speakers.